In a molecule, atoms are connected by covalent bonds that result from overlap of atomic orbitals. Molecules can consist of a small or large number of atoms and may involve all the same kind or a dozen different kinds of atoms. The atoms can be connected by bonds in a variety of different ways, so there is a broad range of different molecular structures. Thus, there are many things a chemist needs to know about a molecule:

At this point we have introduced the first four of these, using molecular formulas, Lewis structures, atomic radii/bond lengths, and bond enthalpies. For example, in a water molecule, the molecular formula H2O indicates that there are two H atoms and one O atom. A Lewis structure, H–O–H shows that both H atoms are bonded to the O atom. The O–H bond length (94 pm) and bond enthalpy (467 kJ/mol) verify that the bonds are strong—separating the atoms is difficult.

But there is more to a water molecule than that. A ball-and-stick or space-filling model shows that the angle between the two O–H bonds is 104.5°—somewhat more than a right angle. Angles larger or smaller than 104.5° result in higher energy (lower stability). As a result of the shape and type of atoms in the water molecule, there are stronger forces between water molecules than between methane (CH4) molecules, although both contain the same number of electrons.

As the number of atoms in a molecule increases the last four factors in the list above become more and more important. You will learn about them throughout this Unit, beginning with additional properties of chemical bonds in the next sections.

On the other hand, if the two atoms are different, they may have different attractions for the shared electrons. When the bonding electrons are attracted by one atom more than the other atom the bond is called a polar covalent bond. For example, in HCl, the Cl atom attracts the bonding pair of electrons more than the H atom does, and electron density of the H–Cl bond is shifted toward the chlorine atom. Quantum mechanics calculations show that the chlorine atom, which has 17 protons, has electron density equivalent to 17.28 electrons and therefore a partial negative charge, δ– = −0.28. The hydrogen atom has a partial positive charge, δ+ = +0.28.

This unequal distribution of electron density on two bonded atoms produces a bond dipole moment, the magnitude of which is represented by µ (Greek letter mu). The dipole moment is equal to:

where Q is the magnitude of the partial charges (for HCl this is 0.28 times the charge of an electron) and r is the distance between the charges (the bond length). Bond dipole moments are measured in units of debyes (D); 1 D = 3.336 × 10-30 coulomb meter.

The bond dipole moment has both direction and magnitude and can be represented as a vector (Figure 3). A dipole vector is drawn as an arrow, with the arrowhead pointing to the partially negative end, and a small + sign on the partially positive end. The length of the arrow is proportional to the magnitude of the dipole moment.

The polarity of a covalent bond is determined by the difference between the electronegativities of the bonded atoms. Electronegativity (EN) is the tendency of an atom in a molecule to attract bonding electron density. Thus, in a bond, the more electronegative atom is the one with the δ− charge.

The greater the difference in electronegativity between two bonded atoms is, the larger the shift of electron density in the bond toward the more electronegative atom is. Greater electronegativity difference, greater Δ(EN), gives larger partial charges on the atoms. Electronegativity values for most elements are shown in the periodic table in Activity 1; they also are tabulated in the appendix.

These three properties are all associated with an atom gaining/losing electrons. Electron affinity and ionization energy are experimentally measurable physical quantities.

Electron affinity (EA) is the energy change when an isolated gas-phase atom acquires an electron; it is usually expressed in kJ/mol.

Ionization energy (IE) is the energy that must be transferred to an isolated gas-phase atom to remove an electron; it is also typically expressed in kJ/mol.

Electronegativity describes how strongly an atom attracts electron density in a bond. It is calculated, not measured, has an arbitrary relative scale, and has no units.

The difference in electronegativity, Δ(EN), of two bonded atoms provides a rough estimate of polarity of the bond, and thus of the bond type. When Δ(EN) is very small (or zero), the bond is covalent and nonpolar. When Δ(EN) is large, the bond is polar covalent or ionic. (In a joined pair of ions, such as Na+Cl−, there is nearly complete transfer of valence electrons from one atom to another to produce a positive ion and a negative ion. The Na+ and Cl− ions form a dipole with δ+ approximately equal to +1 and δ− approximately −1.)

Δ(EN) spans a continuous scale and serves as a general guide; there is no definitive cutoff that defines a bond type. For example, HF has Δ(EN) = 1.8 and is considered a polar covalent molecule. On the other hand, NaI has a Δ(EN) of 1.7 but forms an ionic compound. When considering the covalent or ionic character of a bond, you should also take into account the types of atoms involved and their relative positions in the periodic table. Bonds between two nonmetals are usually described as covalent; bonding between a metal and a nonmetal is often ionic.

Some compounds contain both covalent and ionic bonds. For example, potassium nitrate, KNO3, contains the K+ cation and the polyatomic NO3− anion, which has covalent bonds between N and O.

An atom’s formal charge is calculated as the difference between its number of valence electrons (in the unbonded, free atom) and its assigned number of electrons in the molecule:

The formal charge for any given atom is not the same as its actual partial charge, such as those calculated in Section D9.2 above. This is because formal-charge calculations assume all covalent bonds are nonpolar, which is seldom the case except for homonuclear molecules.

Using Formal Charge to Predict the Most Likely Lewis Structure

In a single Lewis structure, a pair of electrons can only be depicted as shared between two atoms or localized to a single atom. However, as mentioned in Section D6.3, the molecular orbitals of a polyatomic molecule often span the entire molecule. For example, such delocalized electron distributions in π bonds can have a direct effect on molecular properties and chemical reactivity. Therefore, it is important to be able to use Lewis structures to indicate electron delocalization.

For example, two Lewis structures can be drawn for the nitrite anion, NO2−, both of which satisfy the guidelines for the best Lewis structure for NO2‾:

If the NO2‾ molecule were correctly described by either one of the Lewis structures, we would expect one N-O bond to be longer than the other. However, experiments show that both bonds in NO2− are the same length. Moreover, the bonds are longer than a N=O double bond and shorter than a N-O single bond. Hence, neither Lewis structure is a correct depiction of the actual molecule, and the best representation of NO2− is an average of these two Lewis structures.

In the specific case of NO2‾, the two resonance structures above are needed to correctly depict two π-bond electrons that are delocalized over the entire molecule (click on the image below for a rotatable 3D view of the π molecular orbital occupied by these two electrons): 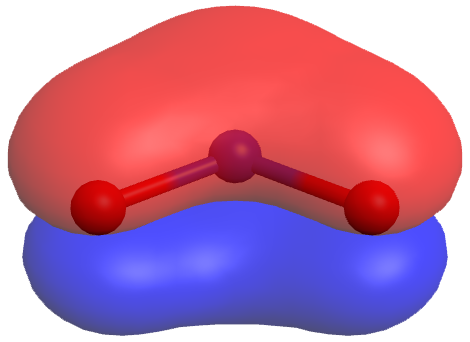 The carbonate anion, CO32−, provides another example of insufficiency of a single Lewis structure and the need for a set of resonance structures:

Experiments show that all three C–O bonds are exactly the same. In other words, the two electrons in the π bond are delocalized over the entire molecule, as opposed to being only between one oxygen atom and the carbon atom.

To summarize, in a single Lewis structure, bonding (σ or π) is always between two atoms. Hence, two or more Lewis structures are needed to properly describe a molecule with delocalized electrons (spread over three or more atoms). When drawing a set of resonance structures:

The atoms in each resonance structure have a full octet, but they differ in their formal charges. This implies that certain electron arrangements may be a bit more stable than others, and hence they do not contribute equally to the resonance hybrid.

All six C-C bonds are equivalent and exhibit bond lengths that are intermediate between those of a C–C single bond and a C=C double bond.

Lewis structures are easy-to-draw, planar representations of bonding in molecules. They help us to figure out and think about which atoms are bonded to which and whether bonds are single or multiple. However, by default, they do not represent the 3D geometry of a molecule, nor the molecular orbitals (MOs) that determine electron-density distributions.

You have probably used VSEPR to predict the 3D shapes of molecules. VSEPR involves counting electron regions (pairs) around a central atom, assuming that electron regions repel and stay as far apart as possible, and bonding terminal atoms to electron regions. VSEPR is often good at predicting the arrangement of bonds around an atom, and it is OK to use it to predict idealized linear, trigonal planar, and tetrahedral arrangements of bonds that you will encounter in this course, but VSEPR has significant limitations:

For these reasons, VSEPR is a model that has limited applicability. In this course we will use a better model—valence bond theory—which is consistent with modern quantum theory, makes more accurate and more comprehensive predictions than VSEPR, and is a better basis for understanding more advanced bonding topics. If you want to, it is OK to use VSEPR to predict idealized shapes, but applying the ideas presented in this section and sections D10.1 through D10.6 will allow you to describe structures with delocalized electrons better and predict bond angles more accurately.

Valence bond theory uses the extent of orbital overlap to infer the strengths of chemical bonds: greater overlap leads to bonds that are stronger and hence a molecule that is more stable. For a given atom in a molecule, overlap with orbitals on other atoms can be greater when some or all of the atom’s AOs form hybrid orbitals. Hybrid orbitals are combinations of valence atomic orbitals that emphasize concentration of electron density in specific directions. A hybrid orbital’s greater electron density in a specific direction provides greater overlap with an orbital from another atom when forming a σ bond.

For an example of how orbital hybridization works, consider combining a single 2s AO with a single 2p AO, both on the same atom (Figure 4). The 2s AO is spherically symmetric, so it has the same phase (mathematical sign) on either side of the nucleus, but the 2p AO changes sign at the nucleus. Thus, on one side of the nucleus, the 2s and 2p AOs are in phase, while on the other side they are out of phase.

Choose a pair of bonds from the list, predict which is longer, and write an explanation of your prediction.

Choose a pair of bonds from the list, predict which is stronger, and write an explanation of your prediction.

Choose a pair of bonds from the list, predict which is more polar, and write an explanation of your prediction.