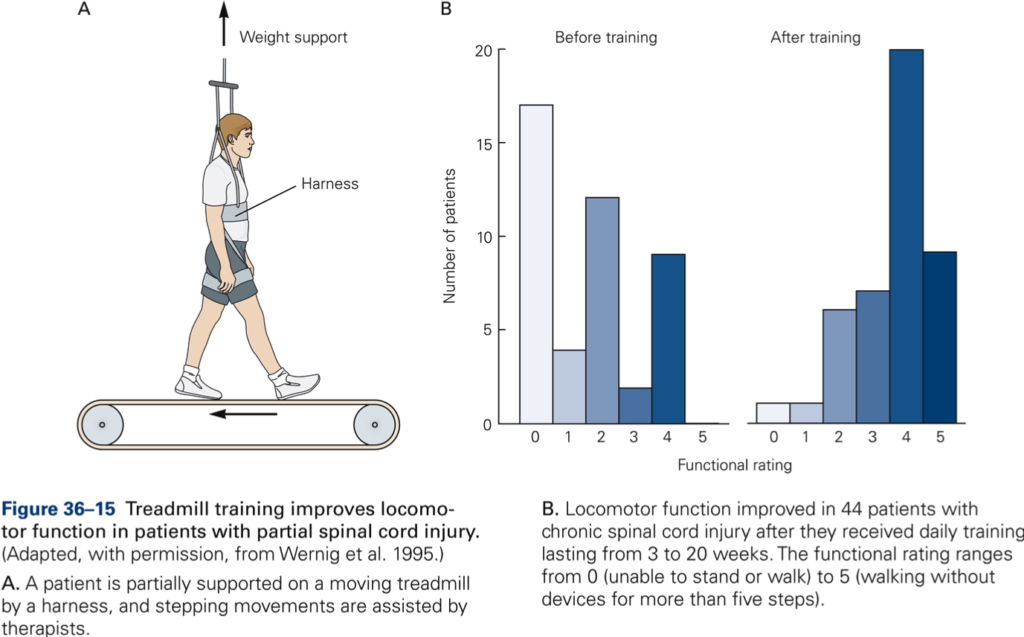 A simple neural circuit that produces alternating activity in flexor and extensor muscles in a single limb. 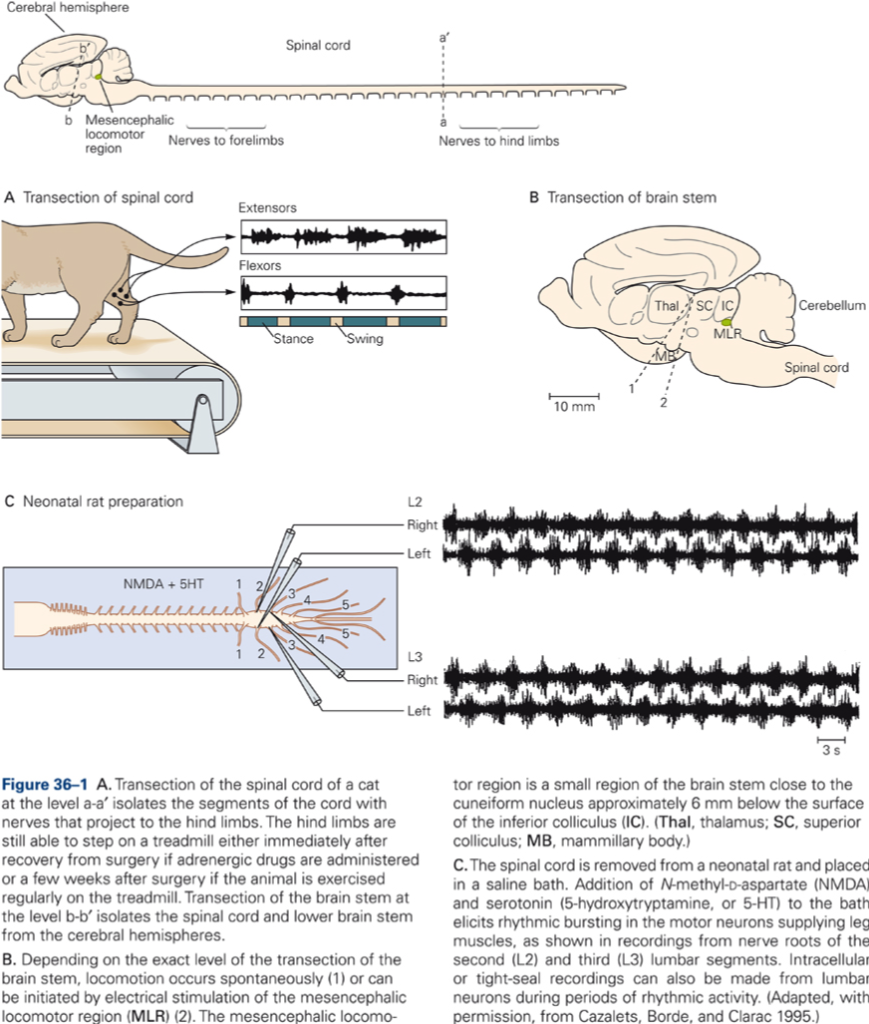 Following separation of the spinal cord from the brainstem and cerebral cortex, cats can still walk on a treadmill (when properly supported). In this preparation, we can study CPGs in isolation, and we can record EMG activity in flexor and extensor muscles. 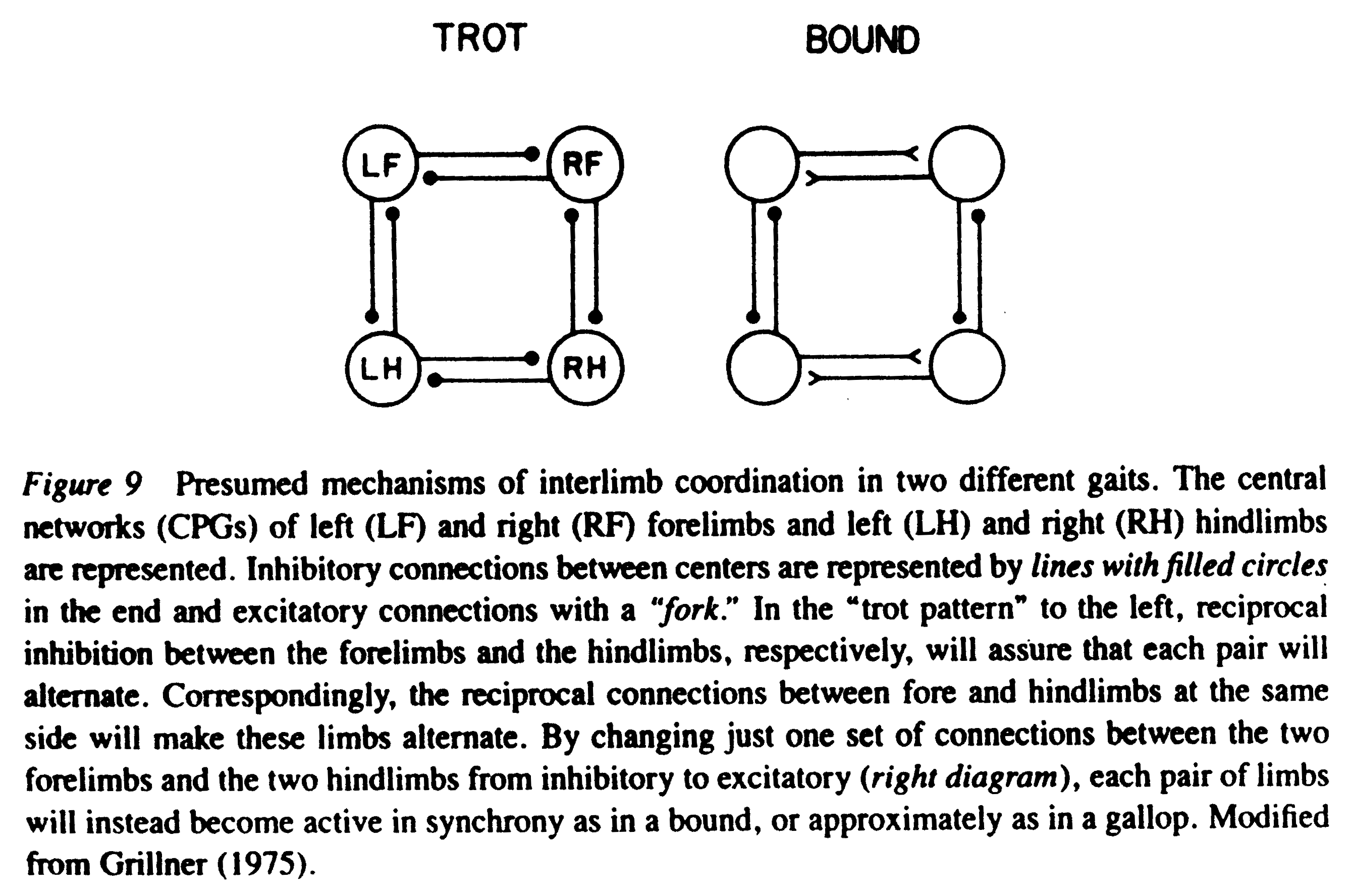 Spinal CPGs are also sophisticated enough to switch gait, i.e. in a quadruped, increased activity in the CPGs switches the pattern of locomotion from walk to gallop. Thus CPGs provide coordination between the limbs. 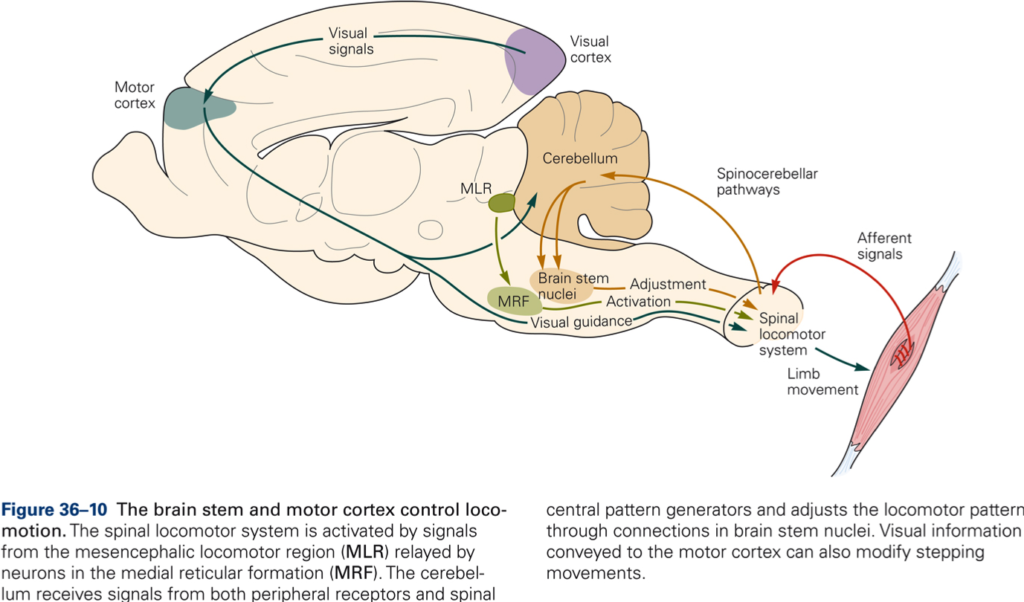 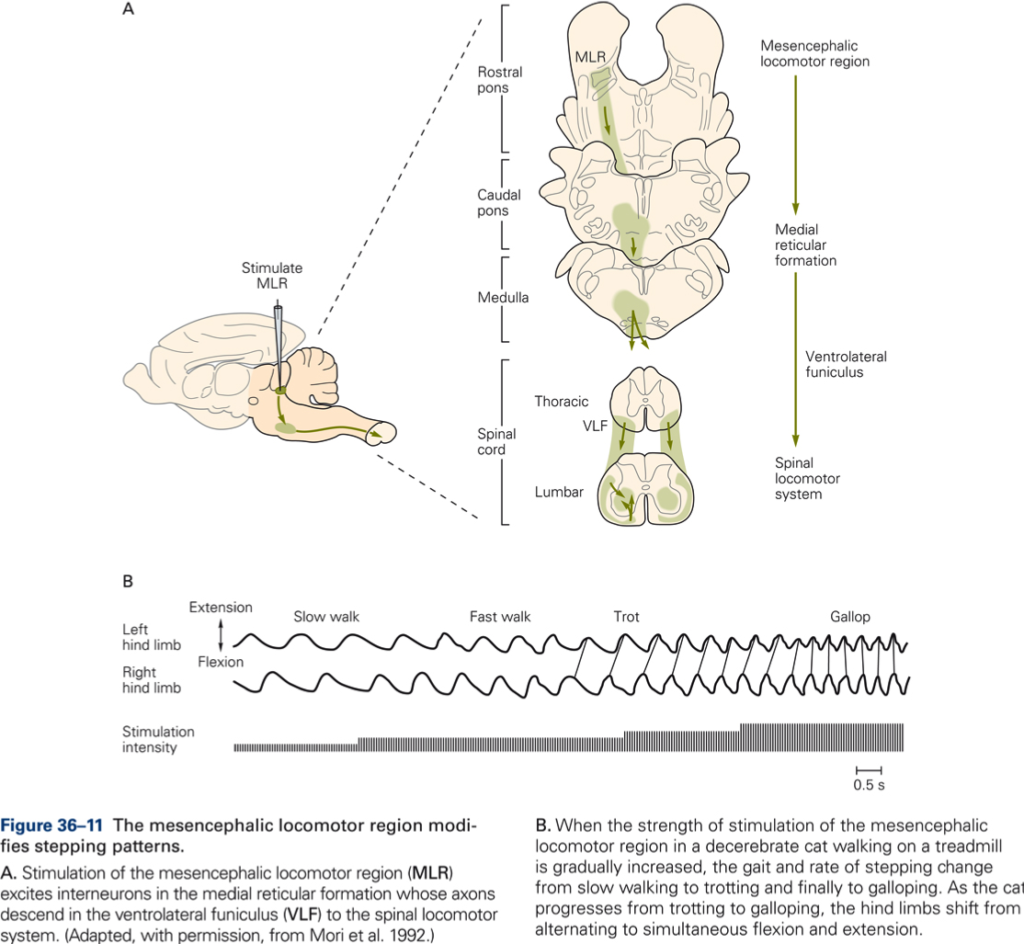 Evidence for the importance of the MLR comes from the decerebrate cat preparation in which the cut that separates the brainstem and spinal cord from the cerebral cortex is made just rostral to the MLR. Electrical stimuli applied to the MLR then activate spinal CPGs and initiate locomotion.

The midbrain locomotor region (MLR) and the reticulospinal tract are particularly important for producing locomotion patterns; they control the frequency and the type of gait expressed by the CPGs.

During peak extension of the limb during the stance phase, there is a critical period in which receptors of in particular the hip joint trigger a sudden cessation of extensor activity, thereby allowing the onset of flexor activity at the start of the swing phase. This is important since the limb during the stance phase supports the body; a premature onset of the swing phase in the supporting limb would destabilize the body. 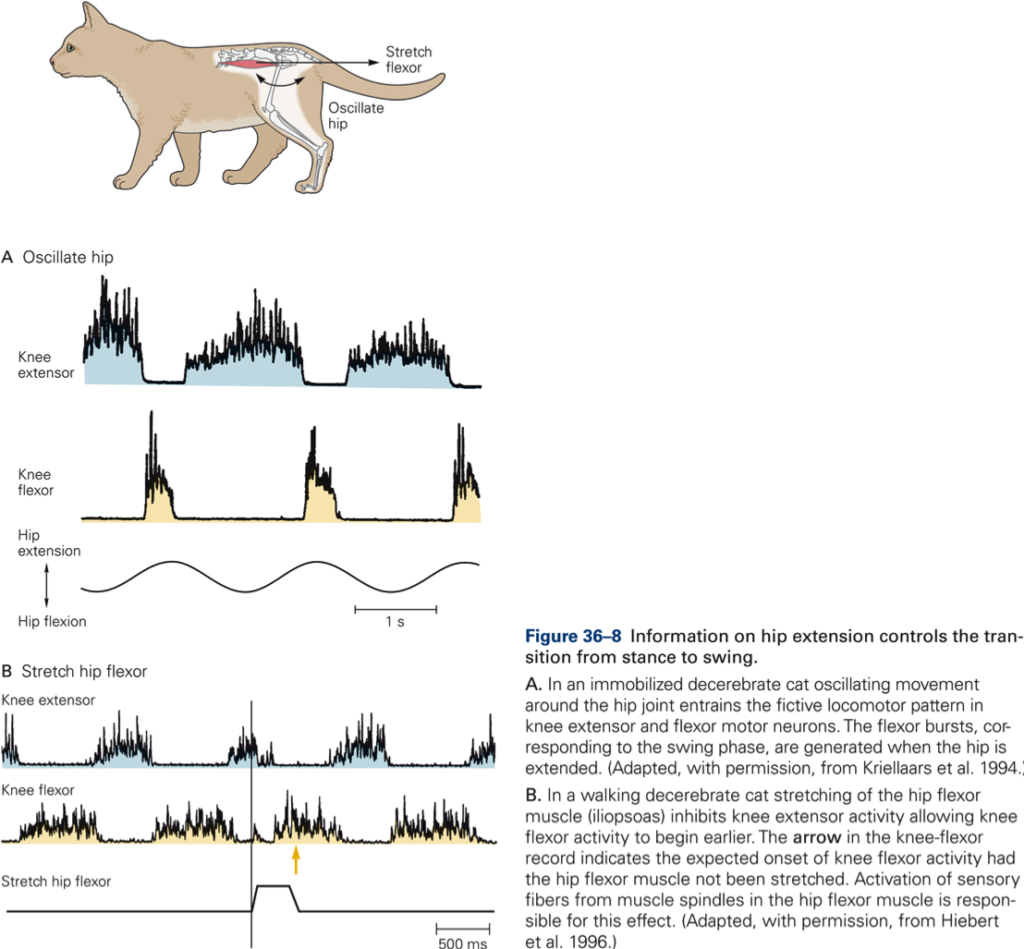 2. Adapt locomotor activity to compensate for changes in the external environment

Activation of cutaneous afferents when a cat’s limb encounters an obstacle during the swing phase triggers flexion of the limb in order to clear the obstacle.

The same stimulus applied to the foot dorsum during the stance phase leads to enhanced extension of the limb. The response is referred to as reflex reversal. It is appropriate or adaptive since this limb supports the cat’s weight.

Activity of neurons in motor cortex is modulated by visual inputs to adapt stepping. 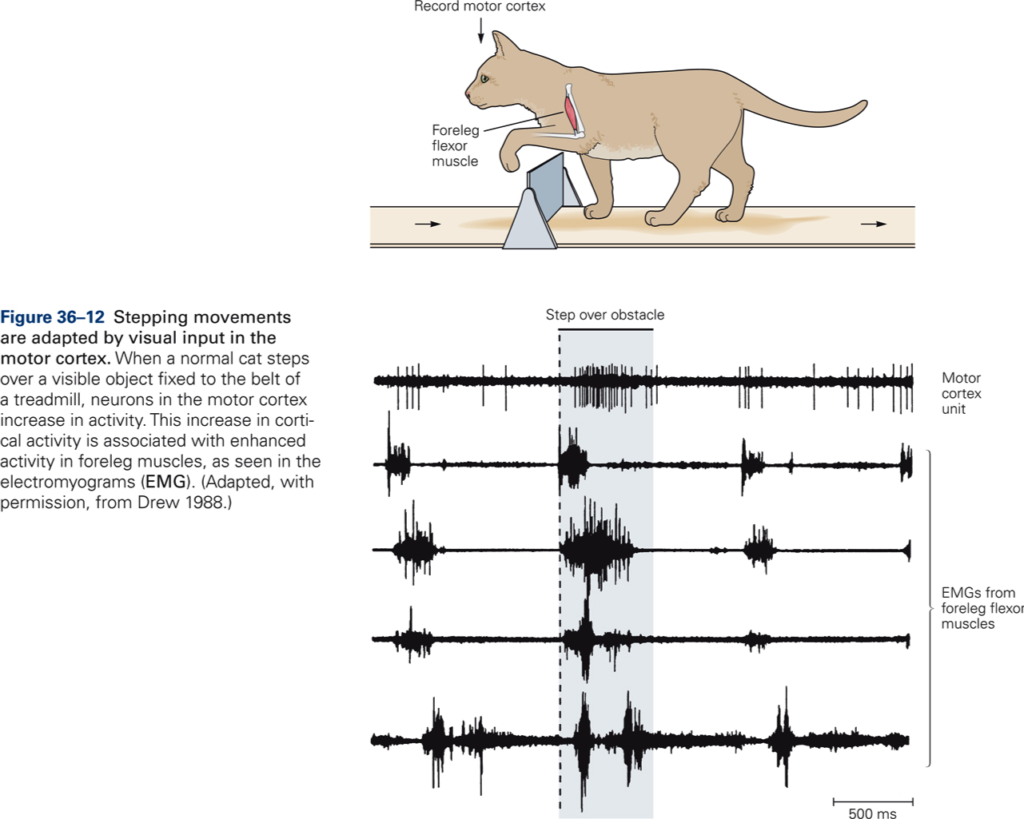 Cerebral cortical motor areas provide further refinement and provide adaptations to the locomotor patterns that require visual input. This can be demonstrated by observing the differences between normal and decorticate cats when they walk on a flat surface as opposed to when they walk on a narrow bar. Decorticate cats make many more mistakes in placing their feet when walking along the bar, causing them to fall off.

Although locomotion is a voluntary act, it is one of the most automatic ones. When we walk on the sidewalk, we do not need to monitor every step, or where we place or feet, however, when we hike along a rocky trail, we pay close attention to placement of our feet. 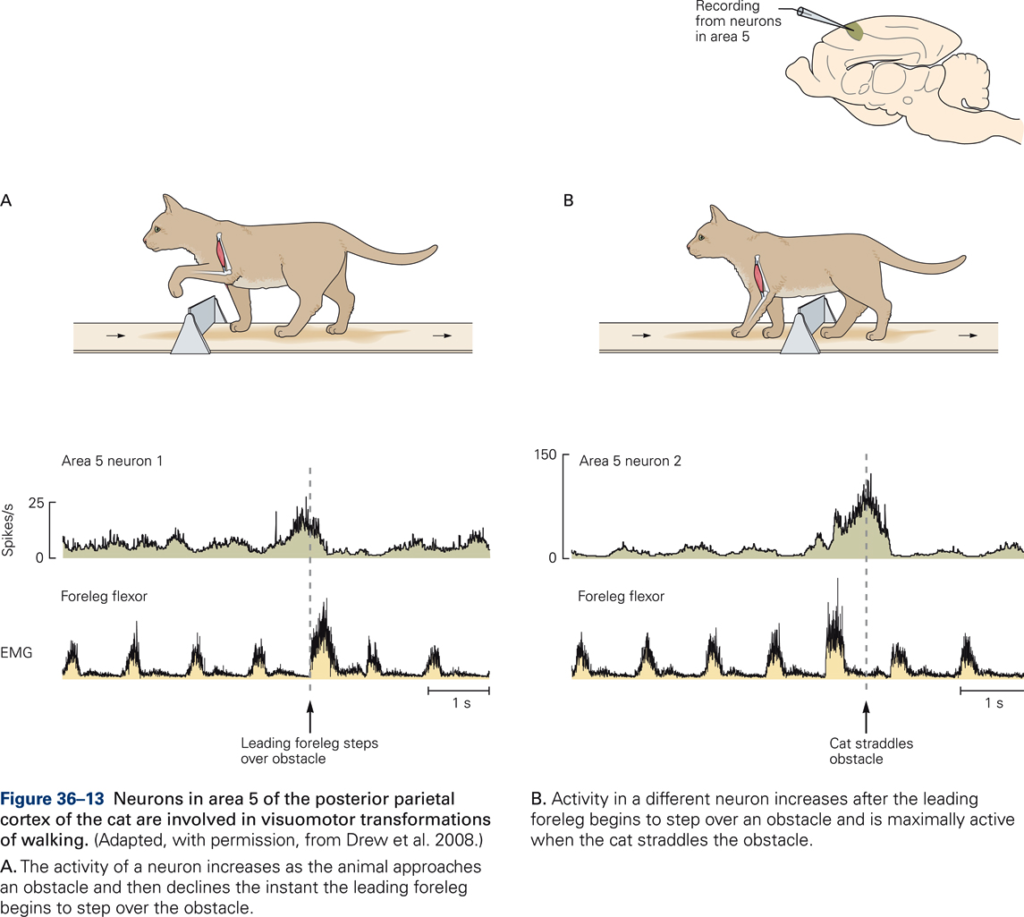 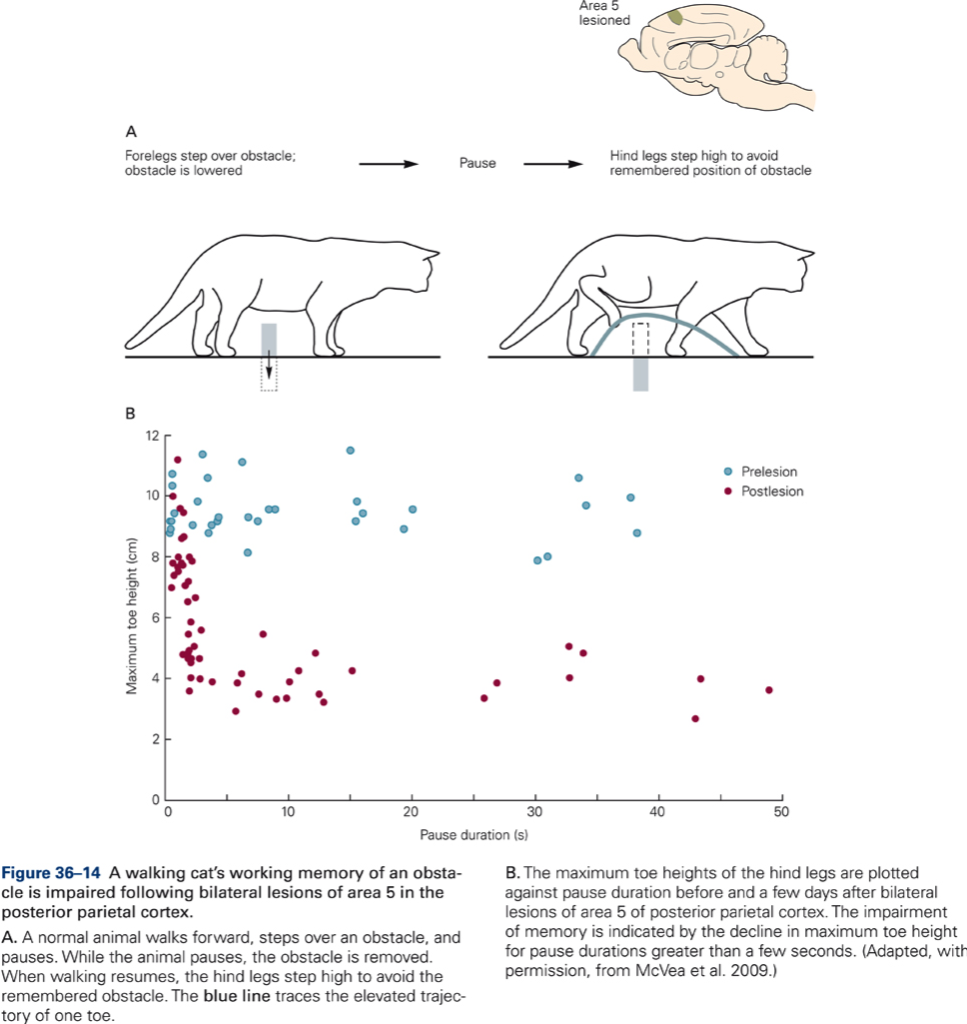