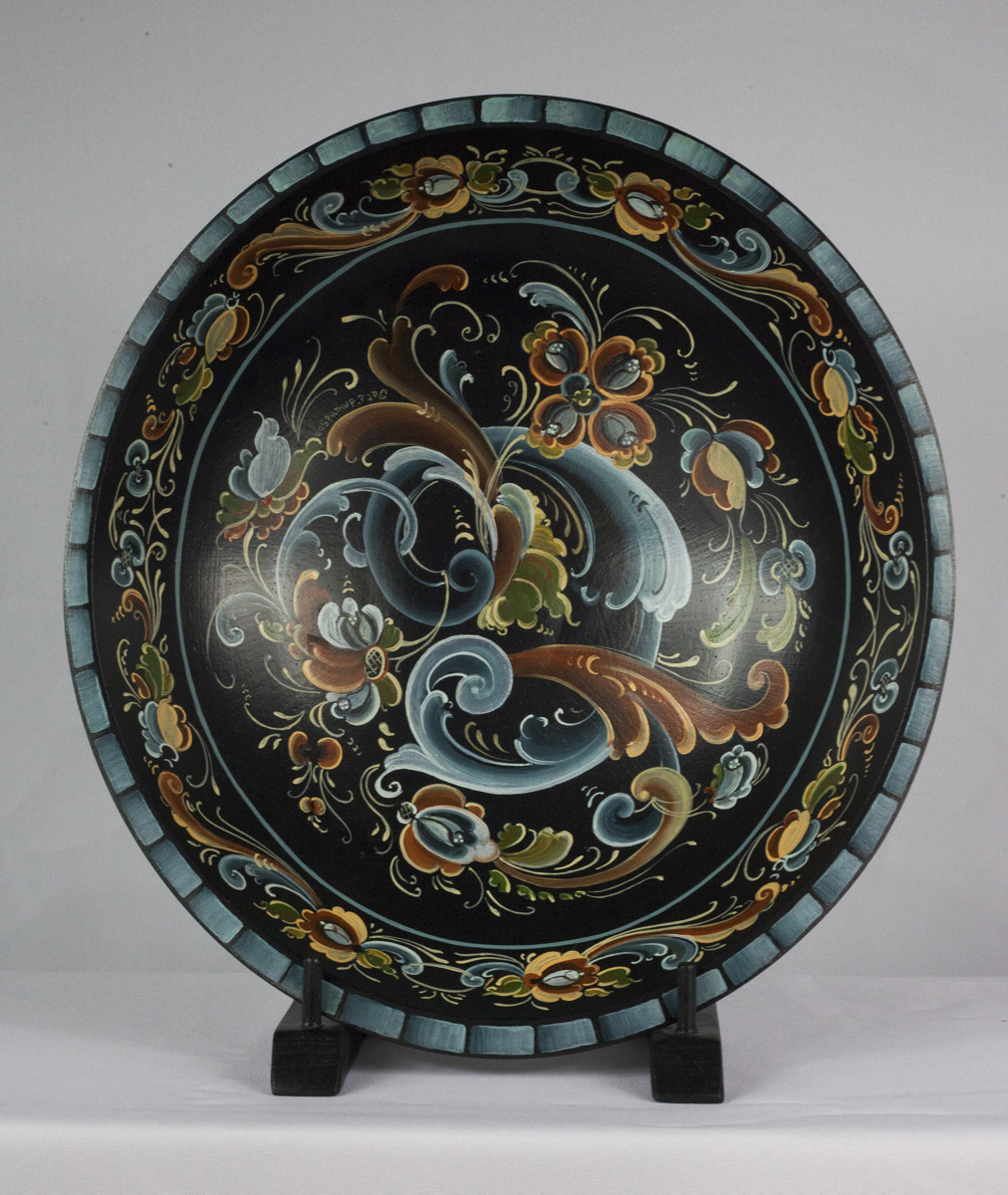 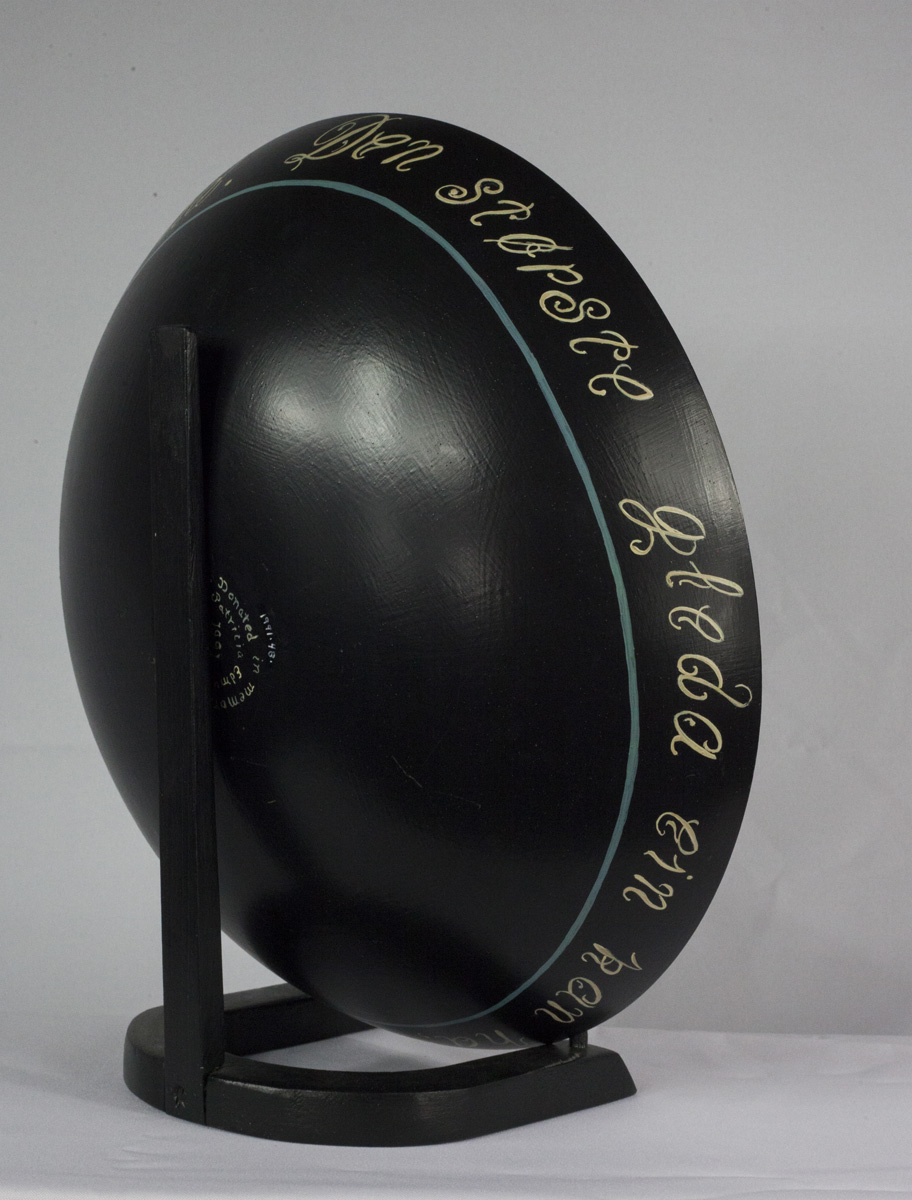 Created in 1991, this bowl commemorates and memorializes the life of Richard “Dick” Horn and was dedicated at the 25th season of Mount Horeb’s annual play, The Song of Norway. The play presented a fictional account of Norwegian composer Edvard Grieg and drew widely from local and professional actors and craftsmen. It also attracted visitors from throughout the region. Horn served as a board member for both The Song of Norway and the Mount Horeb Area Historical Society. The phrase “The Biggest Happiness One Can Have is To Make Another Happy” appears along the outer rim of this Telemark rosemaled wooden bowl. Translated from Norwegian, the lettering is delicately painted in white, utilizing a stylized Gothic print.

This rosemalled wooden bowl represents both Mount Horeb, Wisconsin resident Patricia “Pat” Edmundson’s artistic talents and command of the Telemark technique and her dedication to the community’s performance of Norwegian-American identity.  Beginning in 1966, Mount Horeb hosted an annual outdoor pageant featuring local and professional actors presenting a fictionalized account of Norwegian composer Edvard Grieg.  This play, titled The Song of Norway, operated as a cultural performance of Norwegian identity and heritage from which Norwegian-Americans could draw inspiration as professional actors and members of the community viewed on stage. The annual production provided a strength to what Norwegian-American identity in the community meant through the tradition of performance and connected residents to the larger story of Norway and the role many of their ancestors played in the narrative of immigration to America.

Critical to the story of any successful community event is the dedication of individuals, and when it came to The Song of Norway, Richard “Dick” Horn was among the most significant contributors.  Horn (1941-1990) served as the pageant organization’s president and vice president.  Additionally, he was as a board member for the Mount Horeb Historical Society for fifteen years and operated as a curator for the Wisconsin Historical Society in Madison for twenty-six years.  In recognition of the play’s 25th anniversary, Edmundson painted this intricately decorated wooden bowl in commemoration of and dedication to his memory.

This wooden bowl stands at 12” wide x13.5” long is arguably at the most intricately rosemalled piece currently held in the museum’s collection of Edmundson’s work.  The rich blue Rococo C stems delicately interweaves with the rust and green floral motifs against a stark black background.  This central design, with Edmundson’s signature tucked into the center bottom, is bordered first by a blue circle, around which a continuous print echoes the focal point’s design motifs in an embracing, concentric pattern.  The acanthus leaves and yellow scrawls highlight Edmundson’s skills with fine, sharp lines on the upwardly curved surface.  In contrast, the inner lip of the bowl is painted with rectangles using shades of blue in the Rococo C stems.

Wrapped around the outer lip of the bowl in white paint, Edmundson wrote in Norwegian the phrase which, translated into English, reads, “The Biggest Happiness One Can Have is to Make Another Happy.”  The use of Norwegian both harkens to the mother tongue of many of Mount Horeb and the Driftless Area’s Norwegian immigrant ancestors, but also to the language which would have been spoken by the characters featured in Song of Norway.  The letters are written in a Gothic style, reminiscent of the work by Stoughton, Wisconsin artist, teacher and renowned rosemaler Per Lysne who utilized this font to write Norwegian messages on the walls of homes and on other pieces of art.