Embryological Primordia of the Limbs

The limb buds begin forming late in the fourth week of embryological development.  They are initially sacs of ectoderm filled with loosely packed mesoderm (mesenchyme) derived from lateral plate mesoderm.  The lateral plate mesoderm will differentiate to become the appendicular (limb) skeleton and the blood and lymph vessels of the limbs.  The mesoderm and overlying ectoderm interact extensively to form the limbs, but it has been found that the mesoderm is the driving force behind limb development.

The muscles of the limbs are derived from the myotomes of somites.  The cells that form the muscles of the limbs come from the hypomere of the myotome.  Recall that the muscles that are derived from the hypomere were associated with the ventral rami of spinal nerves very early in development.  This relationship is maintained throughout development.  See the image below from the Human Family Tree: Early Embryology chapter to review this association.

The dermatomal cells also migrate from the somite into the limbs to form the dermis of the skin of the limbs.  In the trunk, the dermatomes are an even repeating pattern.  The limbs are a bit more complex, however, and while dermatomes of the limbs still maintain a general cranial to caudal pattern there will be some adjustments due to the complexity of the limbs.

While the upper and lower limbs of human adults appear strikingly dissimilar, they are both actually built on a similar basic plan.  The basic limb plan is evident when looking at the bones of the appendicular (limb) skeleton.  Both the upper and lower limbs have a girdle that attaches the limb to the axial skeleton.  Both the arm and the thigh have a single, large bone.  The forearm and leg have two smaller bones aligned parallel to one another.  The wrist and ankle are made up of multiple block-like bones.  Finally the hand and foot are made up of multiple bones arranged into five digits each.  Among mammals, humans are unique in that we walk bipedally.  While our lower limbs are built for stability, our upper limbs are freed up to perform complex, highly mobile tasks.  (Take a look at your nearest furry friend—dog, cat, rat, hamster, elephant—and compare their upper limbs to their lower limbs to help you appreciate the differences between bipedalism and quadrupedalism.)

Movement of the limbs occurs around joints, and oftentimes some movements may seem complex.  Luckily, all movements can be broken down into simple movements around three axes (transverse, anterior-posterior and vertical).  We will discuss this in depth in Mind & Motion, but for now we will concern ourselves with the movements of flexion and extension around the transverse axis.

Muscles can only pull, they can never push.  Due to this feature, muscles must work in pairs on opposite sides of a joint to move that joint.  This antagonistic relationship moves the joint around an axis to perform different actions.  Around the transverse axis, a joint can be flexed (decreasing the angle between the two bones) or extended (increasing the angle between the two bones).

As the limbs start to develop, it is important for directional axes to be set up within the limb.

The ectoderm on the most distal aspect of the limb is thickened and is called the apical ectodermal ridge (AER).  Interactions between the apical ectodermal ridge and the underlying mesoderm are required for normal limb development to occur.  It is also an important structure that drives development of the limb.  If the AER is removed or its signalling is disrupted in some way, a limb will not develop.  Amelia (entire limb), meromelia (partial limb), and adactyly (lack of digits) are examples of malformations of the limbs due to complete loss or lack of signalling from the AER.   Conversely, if the AER is duplicated (as happens in diplopodia) an additional limb will form.

The cranial side of the limb (thumb side and big toe side) must be distinct from the caudal side of the limb (little finger and little toe).  The bud’s distinct upper or cranial margin is called the preaxial border, and the lower or caudal margin is called the postaxial border.  For example, with the adult upper limb in the anatomical position, the preaxial border runs from the tip of the shoulder to the thumb.  The postaxial border runs from the base of the axilla (armpit) to the little finger.

The zone of polarizing activity (ZPA) is a small area in the distal limb bud that contains cells that produce the molecule sonic hedgehog (shh).  Shh performs many action in the embryo, but in the limb exposure to shh determines which side of the limb will be the preaxial or postaxial side of the limb.  The thumb develops on the side preaxial side of the limb because it is farther away from the ZPA, and the pinkie develops because it is close to the ZPA.  Upregulation of the ZPA can result in the growth of extra digits (polydactyly) on the pinkie side of the limb.  Experimental relocation of the ZPA in chicks has shown that if the ZPA is relocated to the opposite side of the limb extra digits will form arranged as a mirror image to the normal digits (for example, pinkie-ring-middle-index-thumb-index-middle-ring-pinkie).

A sagittal cross section of a limb bud (below) shows the position of the marginal vein, a prominent vein that runs immediately beneath the ectoderm of the preaxial border, the apical ectodermal ridge (not illustrated) and the postaxial border.  It persists to form veins that are still located in their original pre- and postaxial positions in the adult.  In the upper limb, the preaxial vein becomes the cephalic vein in the adult and the postaxial vein becomes the basilic vein in the adult. 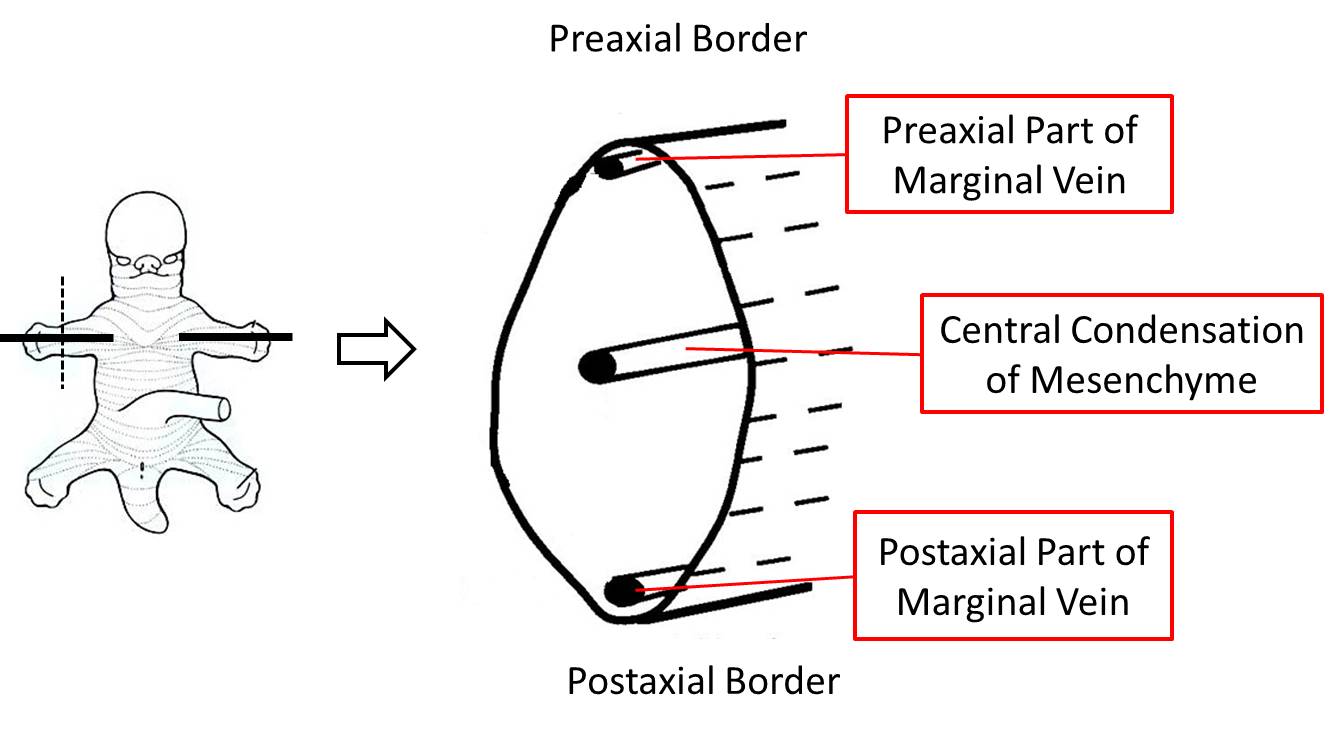 The figure above also illustrates a condensation of mesoderm along the longitudinal axis of the limb, which will form the skeletal elements of the limb.  The central condensation of mesenchyme is also a landmark that can be used to divide the limb into a preaxial compartment and a postaxial compartment (above or below a horizontal line through the central axis).  Note that a vertical line through the central axis separates the limb into anterior and posterior compartments. 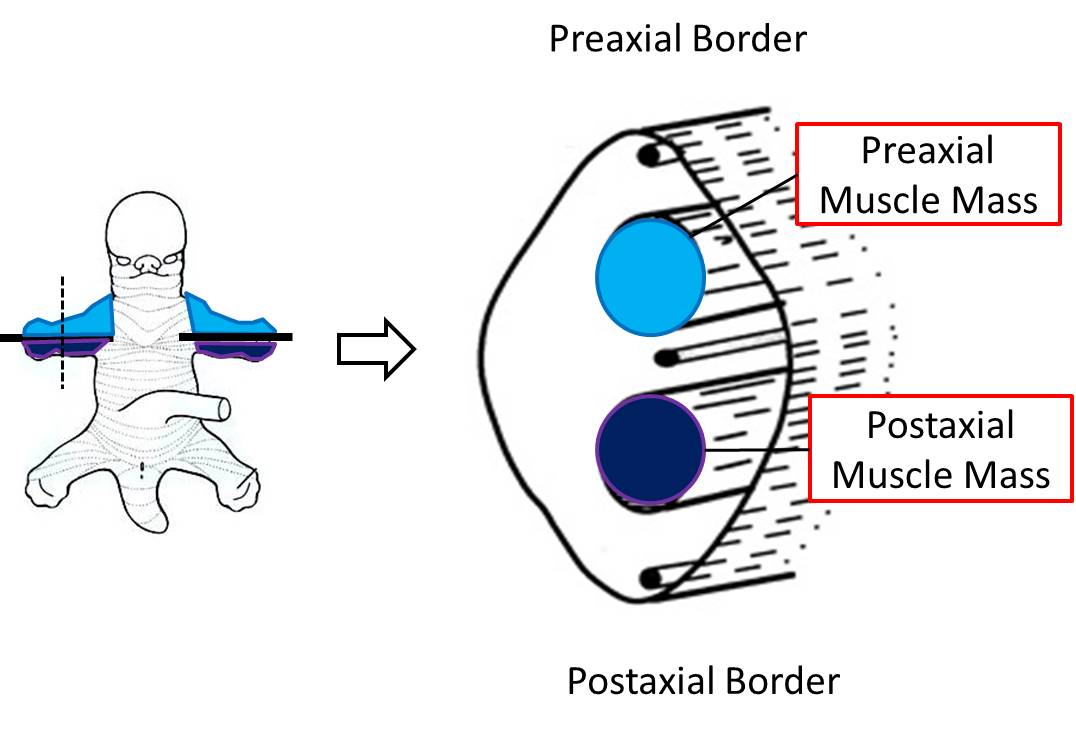 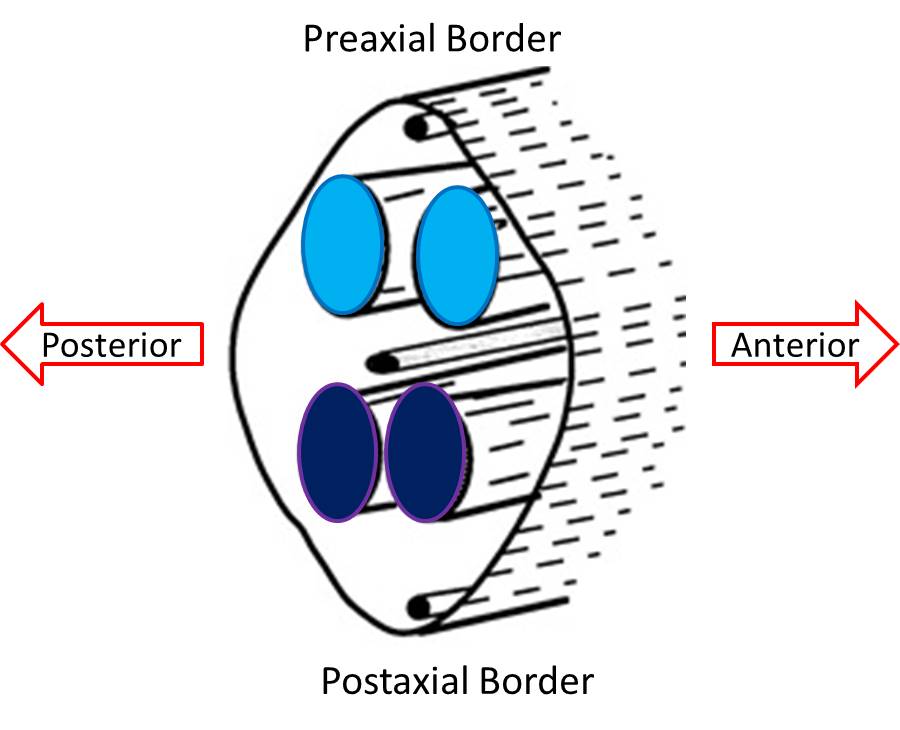 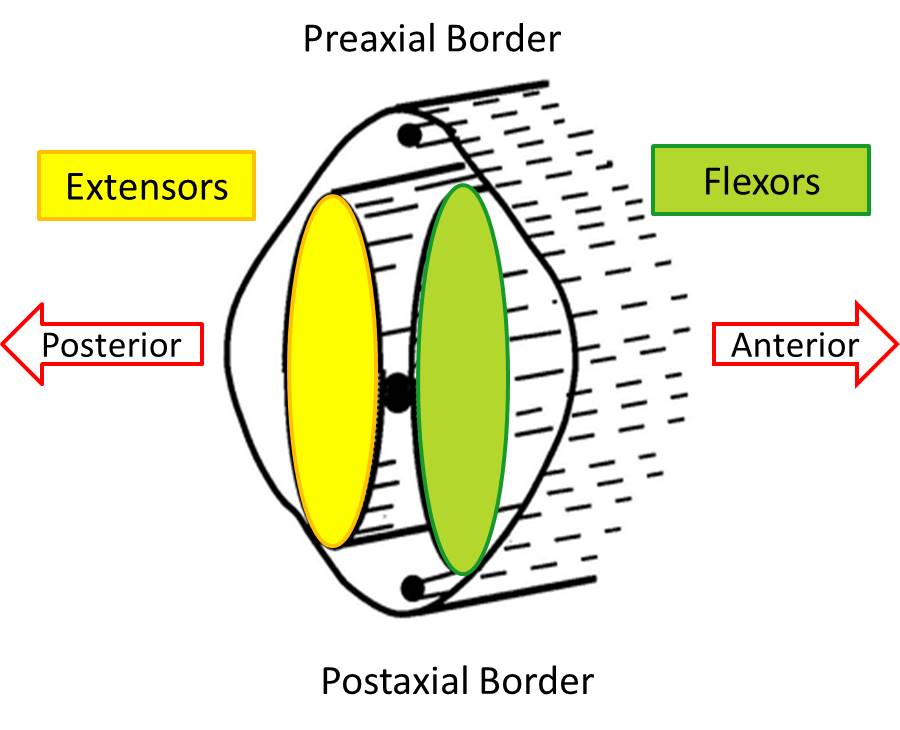 Note that the innervation of muscles of the anterior and posterior compartments is by all segmental levels.  However, in each compartment, the muscles nearest the preaxial border tend to be innervated by the highest segmental levels (in the upper limb C5, 6), whereas the muscles closest to the postaxial border tend to be innervated by the lowest segmental levels (in the upper limb C8, T1).  The dermatomal sensory innervation of the skin also follows this pattern and is clinically relevant.  Dermatomes with the highest segmental innervation (C5, 6) are nearest the preaxial border while the C8 and T1 dermatomes are nearest the postaxial border.  This pattern holds for any location along the length of the limb, even though not all segments are represented distally.  Notice that C6 is an important dermatome of the thumb.

As we have just described, limb development forms functional compartments.  Because each compartment is innervated by a specific nerve (with a few exceptions), it is not necessary to memorize the innervations of the individual muscles.  Simply learn the nerve that innervates the compartment where the muscle is located.  For example, the musculocutaneous nerve innervates all muscles in the anterior compartment of the arm.  Therefore, damage to the musculocutaneous nerve would denervate the biceps brachii, brachialis, and the coracobrachialis, the muscles located in that compartment.  Below are schematic images of the adult compartments of the limb.  In the top image transverse sections of the arm, forearm and hand are shown (anterior is up, posterior is down).  In the bottom image transverse sections of the thigh, leg and foot are shown (anterior is up, posterior is down).  Note that anterior division nerves are in green and posterior division nerves are in yellow (see below for why this appears to be switched in the lower limb).[1] 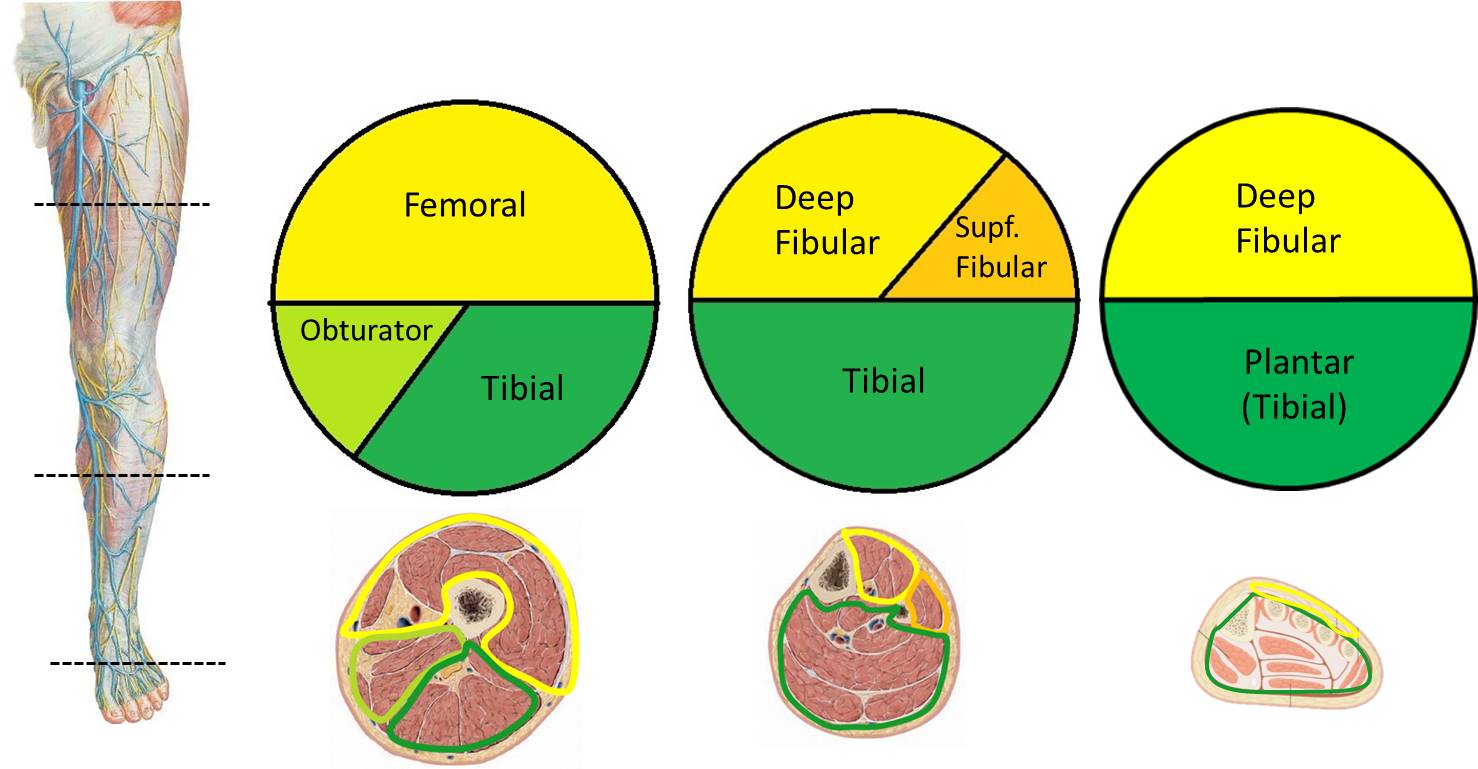 Formation of the Joints and Digits

The individual bones of the skeleton do not start as individual condensations of mesenchyme.  Instead a larger condensation of mesenchyme forms, and then the condensations separate where joints should form.  Joints form through the process of cavitation: a space forms where a solid structure was.  In a single condensation, an interzone forms where the future joint will be located.  The cells at the interzone differentiate into cartilage forming cells and there is probably a small amount of programmed cell death (apoptosis) that occurs in the interzone (although this has not been fully elucidated).  The cells on either side of the interzone are now physically separated and a space forms between them.  The two sides of the joint must mirror each other in shape to be able to move properly, so both sides of the joint must grow simultaneously and interact through cells signaling to be able to form properly.  This stage of joint formation, called morphogenesis, is still not well understood.

The digits first become evident in the limb buds when the mesoderm in the distal end of the bud starts to condense into five separate rays.  The ZPA is instrumental in determining the personality of each digit (thumb to pinkie).  The cells closer to the ZPA (an exposed to shh longer) turn into the pinkie.  Cells that are farther away from the ZPA form the thumb.

The limb bud is originally like a paddle with the digits of the hand or foot within the paddle.  To separate the digits from one another the cells between them must be removed.  To do this the AER at the distal end of the limb bud begins to break up.  The islands of AER are associated with the ends of each of the digits, and the areas where the AER regresses are between the digits.  Where the AER has regressed the cells begin to undergo apoptosis.  Eventually the digits will be completely separate from one another.  If apoptosis does not occur properly syndactyly can result.

Rotation of the Lower Limb

In the adult, the innervation of compartments in the upper extremity is very straightforward.  Anterior division nerves innervate muscles located in the anterior compartments of the arm, forearm, and hand, and posterior division nerves innervate muscles in the posterior compartments of the arm and forearm.  However, development of the lower extremity is more complicated and the innervation pattern seems reversed.  For example, the posterior division femoral nerve innervates the quadriceps femoris muscle, which is located in the anterior compartment of the adult thigh.  Additionally, the quadriceps femoris muscles extend the knee!! What accounts for this reversal?  Simply put, the lower limb rotates 180o during development and the first year of life.