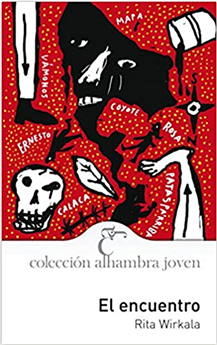 We recommend El Encuentro (English version The Encounter) by Rita Wirkala, a Young Adult novel that is a must-read for young and old alike. The book was first published in Spanish (Pearson Educación, Madrid, 2011) and in English (All Bilingual Press, Seattle, 2013).

The novel, developed on a double plot structure, has two teenage protagonists. Ernesto Moreno of San Diego is a mixed-race teenage adoptee who heads south in search of his birth parents. Rosa Dayuma, a 15-year-old indigenous girl from Ecuador, is traveling north in hopes of reaching her mother who, despite having cancer, is working on a farm in Oregon. Rosa follows the same trajectory of desperate Ecuadoreans sailing from Guayaquil, Ecuador, to Guatemala and then through Mexico. Lives are lost as they rendezvous with people smugglers on the high seas, a real-life peril not commonly mentioned in novels or media coverage. In Guatemala they hike a trail blazed by refugees fleeing the Civil War in which Mayans in the hundreds of thousands were slain by the Guatemalan armed forces. In one enthralling episode, Rosa meets Ernesto on that trail and they pass a single, splendid day together where they promise, their vow sealed with a kiss, to meet again.

Central to Ernesto and Rosa’s story is a situation unfamiliar to most Americans: Ecuadorians flee their jungle homelands because of Texaco-Chevron’s devastating defilement of their land. Almost a thousand open-to-the-sky petroleum and chemical waste pits dot the Ecuadorian jungle. Runoff from these pools, averaging some 15 feet deep by 30 feet or so, has poisoned soil and streams over vast distances, sickening and bringing death to countless thousands of people and animals dependent on these waters for survival. The author, with her husband, filmed one of these pools, which constitute a still-unpunished crime against humanity beginning in the 1960s and continuing to the present day. The video can be viewed here. The pools still leak poison into the Amazon’s headwaters. Their effect has been to set off wave after wave of migrants, refugees not from war but from an environmental crime.

Wirkala knows how to administer information. Only at the end of the book does the reader, along with Ernesto, learn that his adopted father, whom he adores, was involved in the despoliation as a Texaco engineer. From there follows a scene of shocking disappointment and recrimination on the part of the son, followed by pardon and understanding. Rosa, meanwhile, narrowly escapes rape by the coyote and, binding her breasts and cutting her hair, disguises herself, not too convincingly, as a boy. She almost dies of suffocation while hiding in one of the famous “Beast” train boxcars, replete with immigrants mostly sitting on top. Unable to cross the Río Grande, she attempts to cross the Sonoran Desert only to be captured by the police near Yuma and sent to jail, where, after submitting to a full body search, she meets other undocumented minors languishing there, many of them victims of violence and rape. When opportunity strikes, she makes a break for it and is ultimately reunited with her mother in Oregon.

Harrowing as her adventures are, they never strain credulity as they are, in fact, based on travels and interviews conducted by the author. The book is rich with detail not generally known by the general public, some of it drawn from the author’s work as a volunteer for Care International in Macas, Ecuador. Rosa’s sea voyage is based on real-life accounts of Macan women who have made the journey in perilous fishing boats which have taken many lives. The author has also met the Huaorani people, the main victims sickened and displaced from the oil contamination of their lands by U.S. oil companies and their U.S. missionary allies. Rosa, whose grandparents were forced into one of these missionary reservations, and whose father died while working for “The Company,” was born in one.

While leading study groups, the author acquired deep knowledge of Guatemala, where several of her story’s scenes are set. These include close calls during the military campaign known as La Violencia, when whole villages were wiped out. From friends in Casa Latina and Centro de la Raza in Seattle, where Wirkala resides, she has heard stories of perilous desert crossings, of rape and pillage by coyotes and, sometimes, even, the police. Recently, Wirkala distributed books for migrant children trapped along the fence in Tijuana and San Luis del Colorado. She recounts this experience in an article published in the DailyKos and on her page.

While not overtly didactic, The Encounter is an educational treasure trove. We believe it should be part of the high school reading curriculum. The novel is a “Books into Movies” award winner in English (2013), and the Spanish version El encuentro, received an International Latino books Award in 2012. Wirkala currently teaches creative writing at the Seattle Public Library for Seattle Escribe, a group of Spanish-speaking writers in the Puget Sound area and, as the author herself, members of the Latin American immigrant diaspora.

To sum up, this ambitious, well written and deeply moving novel paints a stark panorama of the relationship between immigration, environmental disaster and human misery, and is a real standout in the genre. It is also a story of love and reconciliation.

Diane Lindner is a retired MD Pediatrician and a former Clinical Associate Professor at the University of Washington, Seattle.

Teresa Luengo Cid has worked for the King County Library System since 2009. She has recently self-published her first bilingual children’s book, The Peculiar and Original Belinda.