This is the static version of the interactive Venn diagram from the Critical Orientation section of this project. 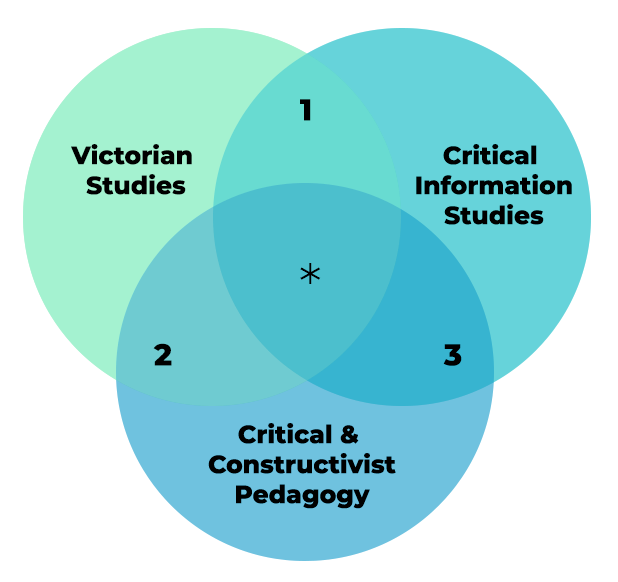 Recent work at the intersections of Victorian Studies and Critical Information Studies (CIS) examines the interplay between the 19th-century world of letters and networks of power and influence. Many authors who take this approach also look to the ways that 19th-century media ecosystems and present-day reading formations may resemble, shape, or differ from one another.

Some examples of work that combines an attention to 19th-century literary forms with an investment in exploring how these forms intersect with current information networks:

Increasingly, scholars of the long nineteenth century are celebrating the value of shared teaching materials and distributing teaching and learning content outside of corporatized publishing spaces.

Examples of projects that facilitate students’ and instructors’ participation in Victorian Studies:

Work at the intersection of CIS and critical-constructivist pedagogy often seeks to explore new ways of facilitating student access to meaningful learning experiences while reducing barriers to educational access.

Examples of work that blends an awareness of different genres’ teaching affordances with a dedication to learner agency:

Undissertating by Naomi Salmon is licensed under a Creative Commons Attribution-NonCommercial-NoDerivatives 4.0 International License, except where otherwise noted.