This article, published in The Illustrated London News on November 30, 1861, describes Emily Faithfull’s efforts to found a printing press run and staffed by women. Notably, this essay appeared during a time when popular sentiment about women’s employment was beginning to shift. Of course, women had long been working to earn a living, but many of the avenues open to them were in ‘domestic’ trades—being a servant, laundress, or lacemaker among them. Professions in the “public sphere”—including positions in law, medicine, or the navy, were generally seen as out-of-bounds for women because of a fear that they would neglect their duties to their families. In this article, we can see a distinction between the domestic labor open to women and the so-called “skilled labor” that many felt was unsuitable for women.

If you are interested in reader history, this article may give you a sense of some of the dominant attitudes that a middle-class Victorian woman might face—or challenge—during the late 1850s and early 1860s. Some questions you might consider: 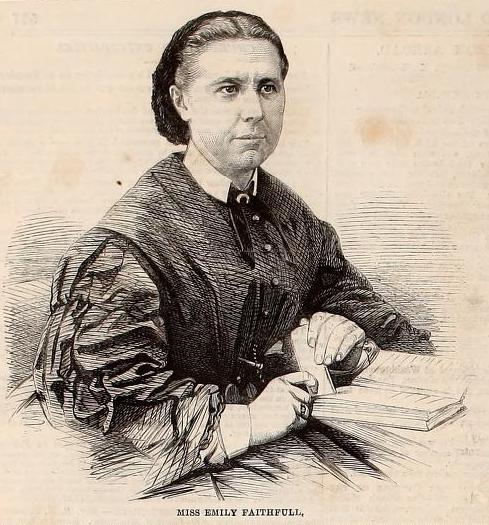 This lady, whose Portrait, engraved from a photograph by Mr. Herbert Watkins, we this week present to our readers, is the youngest daughter of the Rev. Ferdinand Faithfull, Rector of Headley, Surrey, where she was born, on the 27th of May, 1836. Although she is only in her 26th year, she has for some time led a life of active public usefulness, and has already laid the foundation of an establishment the social importance of which it is difficult to overrate.

When the Society for Promoting the Employment of Women was established, in August, 1859, she became a member of the first committee, and she subsequently acted as secretary and superintended the practical working of the society. Early in the year 1860 the council of the National Association for the Promotion of Social Science appointed a committee to “consider and report to the council on the best means which the association could adopt to assess the present movement for increasing the industrial employment of women.” The members of this committee were the Right Hon. the Earl of Shaftesbury, the Hon. A. Kinnaird, M.P., Mr. E.  Ackroyd, Mr. Hastings, Mr. Horace Malin, Mr. W. S. Cookson, Mrs. Jameson, Miss Parkes, Miss Adelaide Proctor, Miss Bouchet, Miss Craig, and Miss Emily Faithfull.[1]

As the labors of the committee proceeded it became evident to all the members, but especially to Miss Faithfull, that women wanted only training to become qualified to act as compositors for the press, and that, provided this training could be given, a new and extensive field for skilled female labour might be opened. Miss Faithfull, whose active and energetic mind delighted rather in the practical development than in the tranquil discussion of a theory, seized upon the idea thus presented to her, and at once proceeded to test its value by establishing a printing-press for the employment of women in Great Coramstreet, on March 25, 1860.

Her project was first viewed with considerable distrust. The advocates of the “family principle” contended that the proper sphere of women’s usefulness was her home, and that her duty was the ministration to the comfort of her husband and children. Those who used this argument forgot, conveniently enough, that all women are not blessed with husbands and children; and that a large majority of those who are married must themselves labour constantly if they would preserve home in comfort for those who are dear to them.

There were other opponents who did not deny that women must work, but objected to the occupation which Miss Faithfull had selected for them as being unfeminine. This objection, however, on being analyzed, was found to mean merely that the occupation now provided for women had not previously been open to them. It could not be denied that women had been employed for many years on tasks little suited to them. There had long been a great and constant demand for unskilled labour of all kinds, but the market for skilled labour had been closed to women. The novelty of Miss Faithfull’s proceedings lay in her endeavor to open the market of skilled labour to her countrywomen, and to find for them an occupation which is in reality more feminine than many to which they had long been accustomed.

After a little while the public, guided by the press, began to perceive the social importance of Miss Faithfull’s undertaking; the objectors were silenced, offers of assistance were mad, and work was freely given to her, and, in two or three months after the establishment of the press, her Majesty signified her gracious approval of the press which is called by her name.

Difficulties of another kind, however, had yet to be overcome. Miss Faithfull had contended that women are fitted equally with men to become skillful compositors; but neither men nor women are instinctively compositors, and Miss Faithfull found herself compelled either to abandon her undertaking, or to employ persons unfamiliar with the work allotted to them, and train them under the heavy pressure of daily duties, and in spite of the jealous opposition of the trade.

That these difficulties have been successfully overcome—that the press has been firmly established—that a number of women have become skillful compositors, and have performed a large amount of work to the entire satisfaction of their employers, are facts worthy of attentive consideration, even in this great age of undertakings. But that all this should have been done by a young lady bred up in the seclusion of a country vicarage, and not previously acquainted with the business, is a fact more noticeable still.

Having now succeeded in establishing the Victoria Press, Miss Faithfull is now seeking to give it a special character, and to make it auxiliary to the National Association for the Promotion of Social Science, for which she is an active member, in the public proceedings of which she has frequently taken part, and in which her own undertaking had its origin. She proposes, by the issue of cheap and simple tracts, to call public attention from time to time to great social improvements. She has already published a tract on Post Office Savings-banks, of which more than 60,000 have been sold; and a tract entitled “Friendless Girls, and How to Help Them.” To these she contemplates adding tracts on “Prison Discipline,” on the “Poor Laws and Workhouses,” on the “Emigration of Educated Women,” and on “Life Insurance by Small Payments,” all of which will be written by persons thoroughly acquainted with the subjects of which they treat.

At present, however, she has in hand a work of more pretension. The “Victoria Regia,” a Christmas book of prose and verse, will shortly be issued from her press. It will contain contributions from nearly all of the most eminent authors of our day who, with generous willingness to aid the cause which she has at heart, have placed their time and their talent at her service. Amongst these contributors are the Poet Laureate, Mr. Thackeray, Mr. John Forster, Mr. Trollope, miss Mulock, Mr. Henry Reeve, Mr. Chorley, Mr. Monckton Milnes, Coventry pat more, Mr. Venables, Owen Meredith, Mr. Dobell, Miss Procter, and many others. The initial letters and the tailpieces to the articles have been designed and carved in wood by ladies, and the editorial superintendence has been undertaken by Miss Procter, who, with a talent which few possess, and a philanthropic heartiness of which even fewer persons can boast, has labored unremittingly to make the work worthy of the cause it is intended to promote, and of the Sovereign who has already signified her approbation of its progress.

The Woman in White: Grangerized Edition by The 19th-Century Open Pedagogy Project is licensed under a Creative Commons Attribution 4.0 International License, except where otherwise noted.