Today you will learn about the neurovasculature of the lower extremity. You will explore the nerves, arteries, and veins of the gluteal region, thigh, leg, and foot. Keep in mind that all structures are not visible on all tissue or other tools, and that is okay. By the end of the lab today, you should have identified all of the structures on the list using multiple modalities. Over the next two labs, you will learn about the muscles, and you will make the connection between these nerves and vessels and the muscles they innervate or supply.

In this lab, we will mention the general area innervated and supplied by these nerves and vessels. In future labs, we will study this more in-depth. You should reference the muscle tables posted on Canvas to see the specific muscles innervated by each nerve.

Like the previous units, you should use nearby structures as a reference when identifying neurovascular structures of the lower extremity. By following a nerve or artery to a specific muscle, you can determine which artery or nerve it is.

Posterior Neurovasculature of the Lower Extremity

Anterior, Lateral, and Medial Neurovasculature of the Lower Extremity

Veins of the Lower Extremity

The veins may not be visible on all of the extremities. Use the Visible Body Atlas or another atlas to view these structures if you cannot identify them on the tissue.

Arteries of the Lower Extremity

Click on the Regions tab, and then choose 10. Hip. In the side Systems toolbar, uncheck the lymphatic, nervous, muscular, and venous systems. You will be left with the bones and arteries of this region. Zoom in on the region of the hip and pelvis. From the anterior view, click on and observe the common iliac artery. This artery originates on each side as the aorta ends and splits in the lower abdominal region. Rotate the image, and observe that the common iliac artery divides into the internal and external iliac arteries.

Return to the anterior view, where you started this section, and remove the lymphatic, nervous, muscular, and venous systems. Now click on the obturator artery, which branches from the internal iliac artery just inferior to the superior gluteal artery and runs anterolaterally along the ilium. Observe how this artery runs through the obturator foramen of the pelvis. With this artery highlighted, rotate the image to view it from different angles. It supplies the thigh adductors, the proximal part of the hamstrings, and one lateral rotator muscle. The obturator artery gives off an anterior and a posterior branch, though you are not responsible for identifying these branches. However, you should know that the posterior branch of the obturator artery gives off the acetabular branch or the artery to the femoral head. Though it is not visible on the iPads, you should know that this artery travels through the ligamentum teres and helps to supply the femoral head.

Zoom out to view the full hip and thigh. Just distal to the common iliac artery, now click on the external iliac artery. Branches of this artery supply the rest of the lower extremity. Notice that the external iliac artery ends as it passes behind the inguinal ligament. Distal to the inguinal ligament, this vessel becomes the femoral artery. Zoom in to take a closer look at the branches of the femoral artery. Observe the deep femoral artery running posteriorly. The deep femoral artery gives off two branches that supply the hip joint: The medial and lateral circumflex femoral arteries. They form an anastomosis to supply the hip region and the head and neck of the femur. Rotate the image to observe how this artery wraps around the proximal femur. 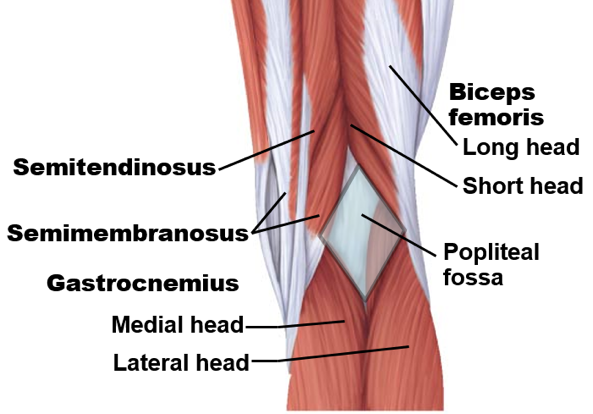 becomes known as the popliteal artery. This artery will be best viewed posteriorly.

The popliteal artery ends just inferior to the knee joint as it splits to form the anterior tibial and posterior tibial arteries.

Rotate the image to an anterior view, click on the anterior tibial artery, and observe that it passes through the interosseous membrane. It descends on its anterior aspect, supplying the anterior compartment of the leg. As it crosses the talocrural joint, it becomes the dorsal pedis artery.

Veins of the Lower Extremity

Click on the Regions tab, and then choose 10. Hip. In the side Systems toolbar, uncheck the lymphatic system, nervous system, and muscular system. You will be left with the bones, arteries, and veins of this region. Zoom in on the region of the hip and pelvis. First, observe the two main superficial veins of the leg, the great saphenous vein, and the small saphenous vein. The small saphenous vein drains the lateral foot and leg and drains into the popliteal vein. The great saphenous vein drains the rest of the lower limb and drains into the femoral vein near the hip.

Nerves of the Lower Extremity

In this view, you can also observe the sciatic nerve exiting through the greater sciatic foramen inferior to the piriformis. As you move inferiorly, you will observe that the tibial and common fibular nerves comprising the sciatic nerve separate from each other in the superior popliteal fossa.