In this lab, you will examine the muscles of respiration, lungs, heart, and roots of the great vessels. The lungs function for the exchange of oxygen and carbon dioxide between the alveoli and the blood.  Our muscles of respiration allow us to inhale and exhale by expanding and diminishing the space in our thoracic cavity and, in turn, our lungs. The heart pumps blood throughout our body, carrying oxygen and nutrients to our tissues, carrying waste products away from our tissues, and much more.

Utilize the digital atlas to explore the muscles of respiration.

Medial to the obliques, observe the rectus abdominis muscle. This muscle appears as two flat muscles running vertically parallel to each other, separated by connective tissue called the linea alba. The linea alba has been cut here to reveal the abdominal organs. Additional horizontal lines of connective tissue separate portions of the muscle, giving the “six pack” appearance. The rectus abdominis flexes the trunk.

Observe the heart in situ in the cadaver. Observe its orientation. The right ventricle is inferior, resting on the diaphragm. The great vessels (aorta and pulmonary trunk) are visible superiorly. The right atrium is to the right, and the left ventricle is to the left. This heart is moderately enlarged compared to a typical heart.

Observe the lungs in the cadaver. They are much smaller than usual, and the reason for this is unclear. Notice that the diaphragm is quite domed in shape and extends unusually superiorly into the thoracic cavity. The abdominal organs (which will be viewed in the next lab) also extend unusually far into the thoracic cavity (e.g. liver, hepatic flexure, spleen, etc.). The donor’s cause of death was non-small cell lung cancer, but evidence if the disease is not evident by viewing the external aspect of the lungs. It is also unlikely to be the primary cause of the small lung size. The patient was a smoker, but that is also unlikely to cause the lungs to be this small and the abdominal organs and diaphragm to move this high into the thoracic cavity.

It is possible that the donor was born with smaller lungs, and the enlargement of the heart may have been compensatory to ensure the body received the oxygenated blood it needed. It is also possible that smoking or cancerous changes made the already small lungs even smaller. This likely would have been observed with imaging as part of the cancer diagnosis, but we do not have access to additional medical records for our donor.

We also have heart and lung tissue (as well as abdominal and pelvic organs) from a second donor. The two coronary arteries and four primary branches arteries can be seen on this heart. Be extremely gentle when handling and turning this tissue.

Observe the great vessels. The ascending aorta leaves the left ventricle, and then the aortic arch arches to the left. The descending aorta descends through the thoracic cavity and continues into the abdominal cavity, carrying blood to the body tissues. The pulmonary trunk leaves the right ventricle and branches into the right and left pulmonary arteries. You can follow the pulmonary arteries to the hilum of the lung.

Observe the size of the lungs from this donor compared to the full cadaver donor. They are substantially larger and more typical in size. The right lung has three lobes: Inferior, superior, and middle. The oblique and horizontal fissures separate the lobes. The left lung only has two lobes due to the space taken up on the left side of the thoracic cavity. The two lobes of the left lung are separated by an oblique fissure.

Darkened spots may be observed occasionally throughout the lung. This can be evidence of smoke inhalation in some cases, and it can also occur with frequent inhalation of polluted air.

The organs from pathology at UW hospital were cut at autopsy to allow the pathologists to search for disease in the tissues. Smaller cuts sequentially along the outside surface of the heart were made to investigate the condition of the coronary arteries. The coronary arteries are usually surrounded by adipose tissue.

The following provides some background on the hearts we have in our lab. Case A and Case C were both males with enlarged hearts (cardiomegaly). The heart in Case C is particularly enlarged. For reference, the typical male human heart weighs between 240-380g. (***Note: All cases tested negative for COVID-19)

As you examine the hearts, you should identify several of these structures on most or all of the specimens. Not all structures will be clearly visible on every specimen, and that is OK.

Be sure to view all of the hearts. Everyone has slightly different anatomy, so it is always good to observe multiple examples. Any of them could be used on an exam.

The plastinated tissue is human tissue that has been preserved in a way that hardens it. While studying this tissue, you can touch it without gloves. However, please try to limit how much you are handling it. This is because the oils and dirt on your hands can degrade the plastinated tissue over time. One of the plastinates has been cut through the right ventricle and atrium. The other has been cut through the left ventricle and right atrium. *Note: The vessel coloring is indicating arteries in red and veins in blue. The colors do not necessarily indicate oxygenated or deoxygenated blood.

When examining the plastinates, use the laminated images and/or digital atlas to help you identify structures in the list of terms and described in the previous activities.

Observe the hilum on the medial aspect of the lungs. By the end of the unit, you will observe several organs that have a hilum. This is where neurovascular structures, and sometimes other structures, enter or leave an organ. In the lungs, you can observe bronchi, arteries, and veins in this location. The bronchi will feel hard as a result of the cartilage in their walls. Arteries have thicker walls than veins, and this will be evident in the hilum as well.

The orientation of these structures as they enter/leave the hilum is consistent and can tell you if you are looking at a right or left lung. You can use the mnemonic “RALS.”

Observe a cut internal section of a lung and examine the appearance of the alveoli. The lungs will look somewhat like a very condensed sponge, which is a result of the alveoli. 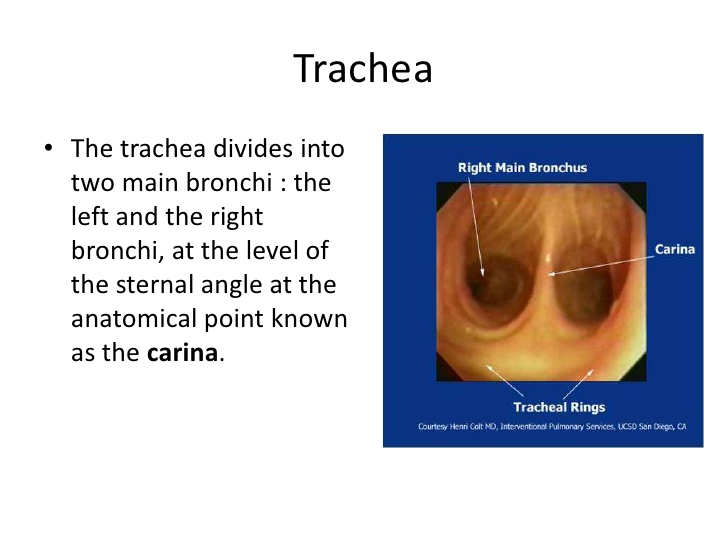 Observe the trachea and primary (main) bronchi. Feel these specimens and notice the hard cartilage. Cartilaginous rings help maintain this tube’s lumen (open portion) so that our airway does not collapse. Also, notice the point where the trachea splits into the primary bronchi. The point at which the split is called the carina. The image at the right is taken from within the trachea, looking down at the bronchi.

Observe the diaphragm. This thin muscle is the primary muscle of respiration. Notice how it is dome-shaped, extending upward into the thoracic cavity, though not as far as in the full cadaver. It is innervated by the phrenic nerve, which cannot be seen on our tissue but can be seen in laminated images or in the visible body atlas. The phrenic nerve descends through the thoracic cavity and innervates the diaphragm. It originates from the C3, C4, and C5 spinal roots. Remember, C3, C4. C5 keeps the diaphragm alive. A portion of the diaphragm is also present with the trachea in Case A.

The Navigator program will be open and ready for you to use. Ask your TA if you need any help or if it is not open. Zoom in on the heart and lungs, and center them on the screen.

View the radiology presentation in Canvas on a lab computer. You will see X-Ray imaging, Echo imaging, and CT imaging of the thoracic cavity. Identify the following structures: