In today’s lab, you will learn about the cerebrum of the brain and introduce the brainstem and cerebellum. This mass of neurons and glial cells controls everything from our ability to breathe, speak, and move our limbs, to our personalities, emotions, and higher-level thinking.

You will use various tools in this lab, including the Navigator, ventricle models, and, most importantly, human brain tissue. The brain tissue must be handled with care and respect. Take extra care to ensure that these brains are covered with towels when they are not in use. Also, handle the tissue carefully to ensure you do not gouge or nick the brain surfaces or pull excessively at parts of the tissue. 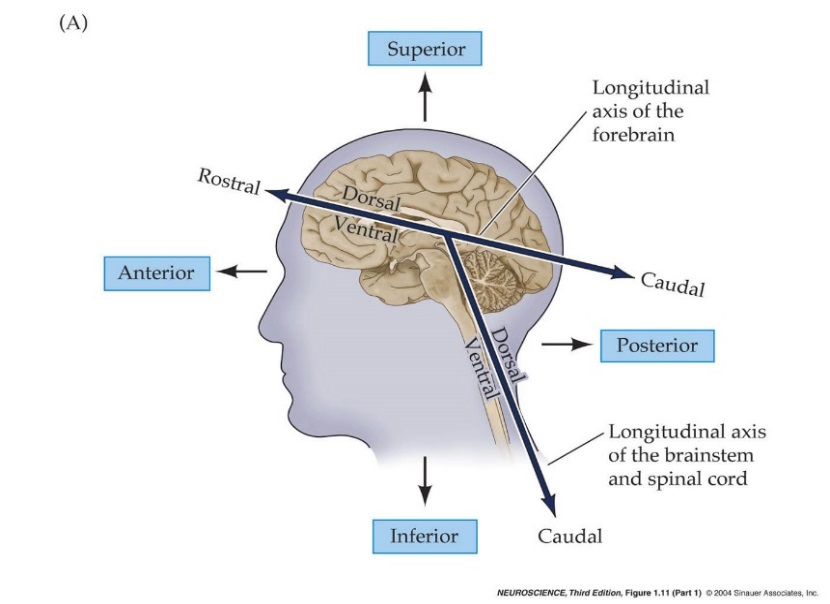 As a result, some of the directional terms may have slightly different meanings depending on the structure to which they refer. Rostral refers to the most frontal portion of the brain (rostrum = nose), while caudal describes structures closer to the tip of the spinal cord (caudal = tail). When used in the context of the cerebrum, rostral refers to structures closer to the nose (as before), but caudal now refers to structures toward the back of the head (posterior). The terms ventral and dorsal can be used interchangeably with anterior and posterior with respect to the plan of the brainstem and spinal cord. However, in the plane of the cerebrum, these terms are interchangeable with inferior and superior.

The University of British Columbia has excellent resources that you may find helpful in studying the brain. These resources at neuroanatomy.ca. The site contains videos, interactive modules, 3D models, cross-sectional images, radiology, and other tools.

We have several brains available for you to learn from in the lab. Some are whole brains, some are cut midsagittally and divided into hemispheres, and others have been sectioned coronally. As you will observe, they all have the same structures, but there is some variation between each anatomically.

First, explore the meninges. Three connective tissue membranes cover the brain: dura mater, arachnoid mater, and pia mater. The brain has a consistency like somewhat firm jelly during life. The meninges protect this soft structure by anchoring it to the skull and preventing excessive movement within the skull.

The arachnoid mater can be seen on the surface of some of the brain tissue. It is the middle layer of the meninges, and it is a delicate, transparent membrane. The arachnoid mater does not follow the contours of the sulci and gyri; instead, it follows the form of the overlying dura. On several of these brains, you can notice aggregations of tiny white granules near the superior midline of the brain. These are arachnoid granulations. They function to return cerebrospinal fluid from the subarachnoid space (between this arachnoid mater layer and the pia mater layer of meninges) to the blood.

The pia mater is the innermost dural membrane. It cannot be seen with gross examination of the brain, but it covers the surface of the brain tissue, including within the sulci and gyri, of these brains.

The cerebral hemispheres contain the brain regions involved in our higher cognitive functions, including language, learning, memory, and personality. The surface of the cerebral hemispheres is made up of the cerebral cortex, which is a layer of gray matter. This surface is thrown into many folds forming sulci and gyri. The sulci are the folds diving inward, while the gyri are ridges of the cortex that are visible on the surface of the brain. Sulci and gyri are essential because they increase the surface area of the cortex, giving us more room for neurons involved in higher cognitive functions.

Use the whole-brain and midsagittally sectioned brain tissue to identify the following structures of the cerebral hemispheres.

Though not part of the cerebrum, observe the cerebellum and the three parts of the brainstem: the midbrain, pons, and medulla oblongata. You can only see the midbrain in the midsagittal section, as it is mostly hidden by other structures in the whole brain tissue. For now, be familiar with the general location of these structures. We will discuss them more in-depth in the next lab.

The Circle of Willis: Blood Supply to the Brain

The brain is supplied by two pairs of arteries: the vertebral arteries and the internal carotid arteries. They branch into arteries that eventually supply the whole brain. First, look at these arteries and their branches on the inferior aspect of the whole-brain tissue. Then observe the anterior cerebral artery on the midsagittal section. 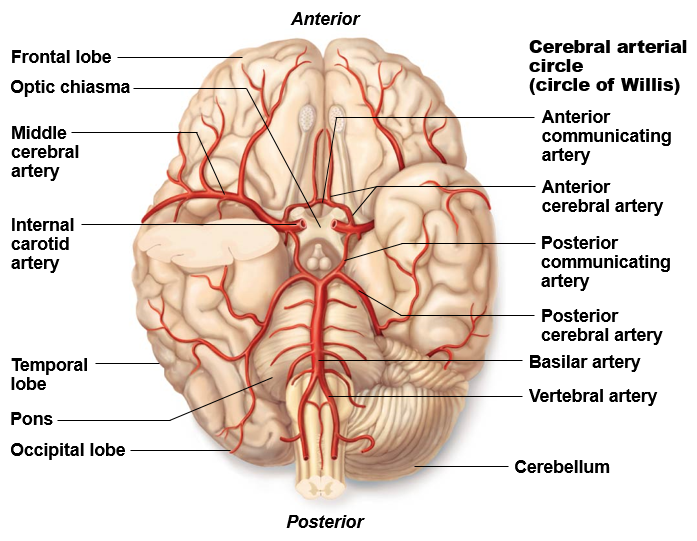 The three pairs of cerebral arteries and the three communicating arteries form the Circle of Willis, an arterial circle that provides collateral circulation. There is a great deal of variation in the sizes of the component arteries of the circle, including instances of left-right asymmetry. It is not unusual to have an incomplete circle of Willis, and you may notice some variations in the brain tissue in our lab.

Activity 2: Ventricle Models and the Flow of Cerebrospinal Fluid

The brain contains several open spaces, called ventricles, filled with cerebrospinal fluid. The ventricle models represent the shape of the open, fluid-filled spaces in the brain. Utilize both the ventricle models and obtain a midsagittally sectioned brain tissue to see the ventricles. The models have laminated images and a key. 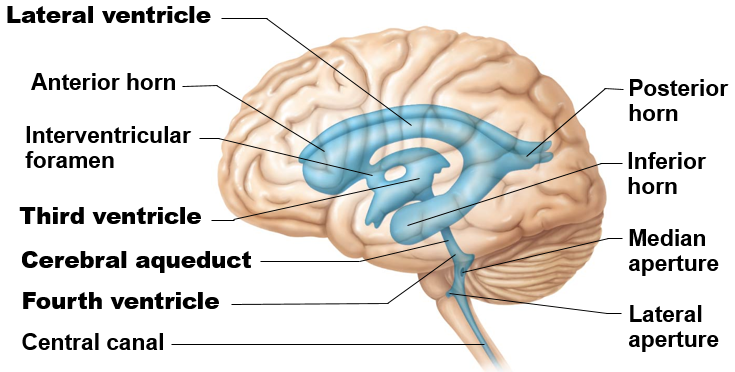 Observe the following structures in the Visible Body app:

Observe cross-sectional images of the brain using the Navigator. Be sure to observe slices throughout the brain. Many structures span a large portion of the brain, while others are only visible in a few slices.

Observe the following structures in cross-section:

Observe the above structures in the coronally-sectioned brain tissue. When observing the medial temporal lobe, notice the significant atrophy of both the amygdala and hippocampus. This may be due to neurodegenerative disease, but we do not know the cause of death or medical history for this individual. If you observe the corresponding midsagittally sectioned hemisphere, you can see the atrophy of the intact medial temporal lobe.

When observing the color-coded images included at this station, note that the brain sections are stained so that the white matter appears very dark compared to the gray matter.

Lab Activity 5: Radiology of the Brain