Observe the brainstem, cerebellum, and cranial nerves on the brain tissue. Also, use the atlases and iPad app to help you find each structure on the tissue. If you are having trouble identifying something, please ask a TA for help.

**Please remember to be GENTLE with the brain tissue. Do not dig around, spread apart lobes, or press down with more than a light touch on the brains. Treat them with care, as we will be using these same brains for several years.

Observe the folia on the midsagittally sectioned brain. Also, observe how the fourth ventricle separates the cerebellum from the pons of the brainstem.

The three major regions of the brainstem, from inferior to superior, are the medulla oblongata, the pons, and the midbrain. The brainstem contains cranial nerve nuclei (collections of neurons) that communicate with the cerebrum, cerebellum, and spinal cord, as well as nuclei that form the cranial nerves. It also contains sensory and motor pathways connecting the cerebrum and the spinal cord.

Locate the whole brain and midsagittally section brain tissue. Use these to identify the following major brainstem structures. 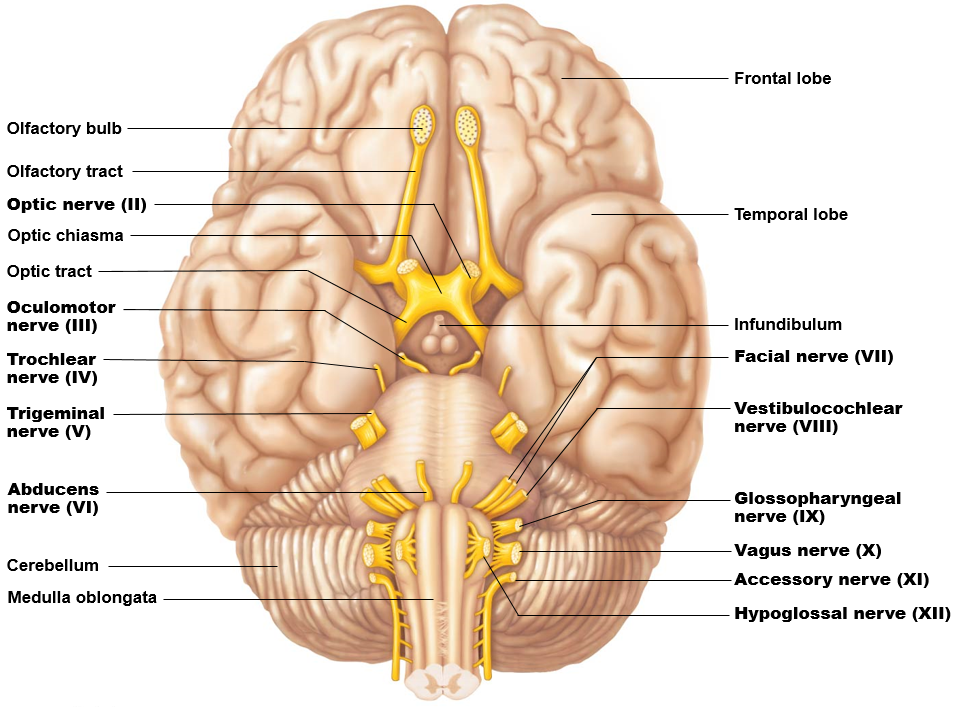 Tip: The cranial nerves with only motor functions (oculomotor, trochlear, abducens, and hypoglossal) emerge medially compared to the other cranial nerves. You cannot see this with the trochlear nerve because it emerges on the brainstem’s dorsal aspect, but you can notice this with CN III, CN IV, CN VI, and XII.

Review the summary of cranial nerves table. The chart describes the cranial nerves, their passageways through the skull, and their functions.

Use the Navigator to observe the cerebellum, brainstem, and skull. You can click on Advanced to select/unselect structures and isolate the brainstem and spinal cord or isolate specific cranial nerves to observe where they emerge from the brainstem or travel through the skull.

You can also review the cross-sectional anatomy of the brain covered in the previous lab while you are at the Navigator in this lab.

Using the atlas and a skull, identify the passageways listed in the chart below. Pass a pipe cleaner through the larger passageways to see where they exit the skull. Note that the stylomastoid foramen cannot be observed on the internal aspect of the skull. This foramen is visible between the mastoid process and styloid process of the temporal bone.

*Note: The trigeminal nerve gets its name because it divides into three branches (the name means “three twins”). The different branches pass through different foramina of the skull. You do not need to know or identify the branches of the nerve (in parentheses in the chart) in this lab. You will just be asked to know that a branch of the trigeminal travels through the specific foramina above.

**A portion of the accessory nerve does travel through foramen magnum, but we will not test you on that in this course.