Observe the nerves and vessels of the upper extremity on the cadaveric tissue. Remember to use landmarks to help you identify the neurovasculature! For example, if you know which muscles are innervated by a specific nerve and follow a nerve to that muscle, you can identify that nerve.

Nerves of the upper extremity:

Explore the brachial plexus. In general, your first step should be looking for the “M” formed by the parts of the medial and lateral cords coming together to form the median nerve. This will help you get your orientation of what is medial and what is lateral. Once you know which is the medial or lateral cord, you can narrow down the branches coming from them. The “M” sits just anterior to the axillary artery. This also makes it easier to identify the posterior cord sitting posterior to the “M” and the axillary artery. 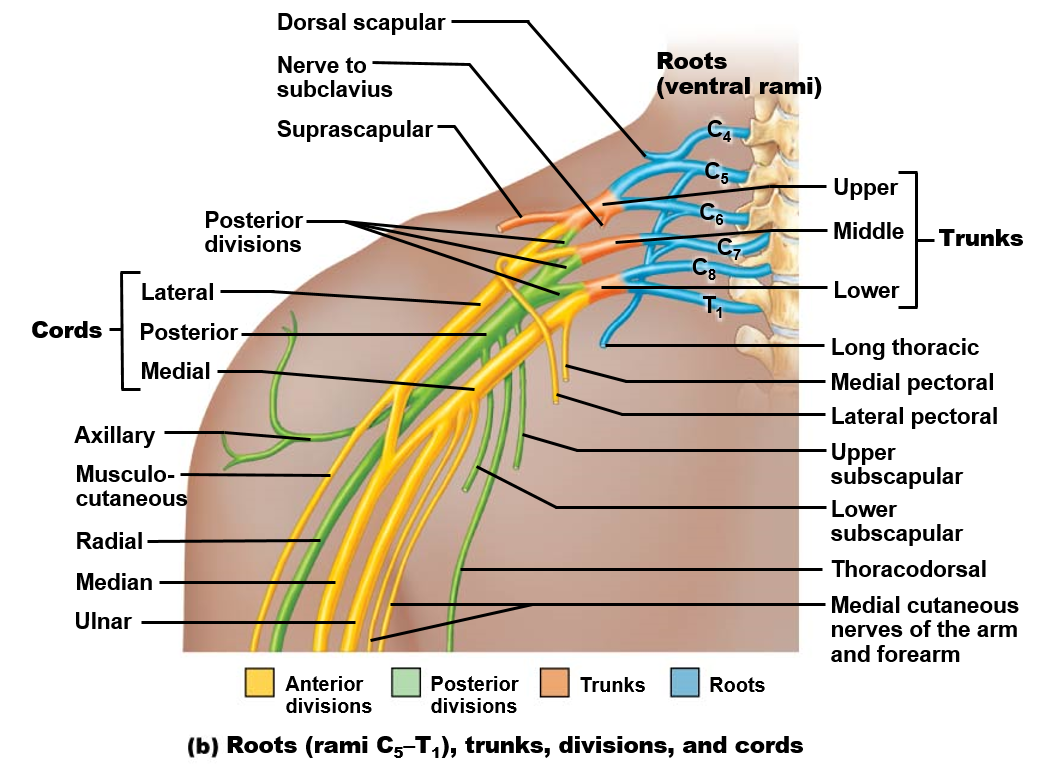 arteries of the upper extremity:

Observe the arteries of the upper extremity.

Veins of the upper extremity:

Most of the veins have been removed from the dissected cadaveric specimens. However, they are visible in atlas images and on the plastinated specimens. Two primary veins originate in the superficial forearm:

Lab Activity 2: Neurovasculature of the Upper Extremity in the Visible Body Digital Atlas

Click on the tab marked Systems, then under Circulatory System Views, click 1. Circulatory System. On the left side of the screen, open the systems tab and click the venous system to DE-select it. Now you should only see the arterial system.

Explore the upper extremity arterial structure. You will need to use finger gestures to zoom and rotate the image into the best position to get the best view. Look for the following:

Highlight each of the structures outlined above and look at the box on the upper right-hand side of the screen and review the information provided (click on the book for more information on the structure highlighted). Review as many of the visible vasculature structures as possible.  Be sure to rotate the structure to appreciate multiple points of view.

Here are a few tips for identifying arteries of the axilla and arm:

Click on the tab marked Systems, then under Circulatory System Views, click 1. Circulatory System. Open the systems tab on the left side of the screen, and click the arterial system to DE-select it. Now you should only see the venous system.

Explore the upper extremity venous structures. You will need to use finger gestures to zoom and rotate the image into the best position to get the best view. Look for the following:

Click on the tab marked Systems, then under Nervous System Views, click 9. Brachial Plexus.  You will need to hide some muscles and bones to see all structures, including the pectoralis minor and biceps brachii short head.

This exercise is designed to help you learn the branches of the brachial plexus and the muscles that those branches innervate. The brachial plexus provides innervation to all muscles and skin of the upper extremity. These nerves originate from the C5-T1 roots. Then they branch and merge, creating a web of nerves at the trunk, division, and cord levels. Several branches off of the trunk and cord levels innervate muscles acting on the pectoral girdle. Finally, the branchial plexus ends as five terminal branches. The posterior cord splits into the axillary and radial nerves. Branches of both the medial and lateral cords merge to form the median nerve. The rest of the medial cord becomes the ulnar nerve, while the rest of the lateral cord becomes the musculocutaneous nerve. These terminal branches innervate the rest of the muscles of the upper extremity. 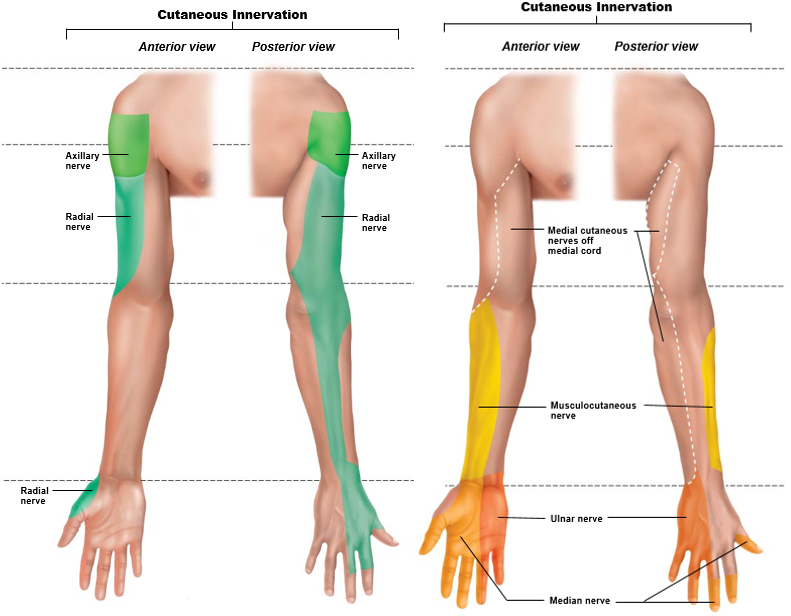