The section introduces to concept of enthalpy as a state function. Using this concept, we will explore and develop a method known as Hess’s Law. This powerful method greatly extends the range of chemical reactions for which we can calculate heat flow. This section includes worked examples, sample problems, and a glossary.

The heat given off when you operate a Bunsen burner is equal to the enthalpy change of the methane combustion reaction that takes place, since it occurs at the essentially constant pressure of the atmosphere. Chemists usually perform experiments under normal atmospheric conditions, at constant external pressure with q  =  ΔH. Determining qp in a calorimeter by measuring the heat exchanged with the surroundings will therefore lead directly to the determination of ΔH for the process taking place in the calorimeter. Using an analogy involving money may help you understand this better. If you withdraw $100 from your bank account (analogous to qp) you can actually count the money you receive. This is what happens in a calorimeter, although it is the Joules of heat that are determined as a reaction occurs. You might not actually know the exact amount of money in your bank account, but your bank balance will have decreased by exactly $100. This is analogous to the enthalpy change. Initial enthalpy values of reactants and final enthalpy values of products, like the bank balance in this example, are not known and nor do they have to be, in order to determine the change or difference between them, ΔH.

The following conventions apply when we use ΔH:

Zn is the limiting reagent

Be sure to take both stoichiometry and limiting reactants into account when determining the ΔH for a chemical reaction.

Another Example of the Measurement of an Enthalpy Change
A gummy bear contains 2.67 g sucrose, C12H22O11. When it reacts with 7.19 g potassium chlorate, KClO3, 43.7 kJ of heat are produced (released). Determine the enthalpy change for the reaction

Enthalpy changes are typically tabulated for reactions in which both the reactants and products are at the same conditions. A standard state is a commonly accepted set of conditions used as a reference point for the determination of properties under other different conditions. For chemists, the IUPAC standard state refers to materials under a pressure of 1 bar and solutions at 1 M, and does not specify a temperature. Many thermochemical tables list values with a standard state of 1 atm. Because the ΔH of a reaction changes very little with such small changes in pressure (1 bar = 0.987 atm), ΔH values (except for the most precisely measured values) are essentially the same under both sets of standard conditions. We will include a superscripted “o” in the enthalpy change symbol to designate standard state. Thermodynamic data is given for the standard states and a specified temperature which is almost always 298.15 K. In this text, if the temperature is not provided for a ΔHo value, you may assume the temperature is 298.15 K. (The symbol ΔH is used to indicate an enthalpy change for a reaction occurring under nonstandard conditions.)

The enthalpy changes for many types of chemical and physical processes are available in the reference literature, including those for combustion reactions, phase transitions, and formation reactions. As we discuss these quantities, it is important to pay attention to the extensive nature of enthalpy and enthalpy changes. Since the enthalpy change for a given reaction is proportional to the amounts of substances involved, it may be reported on that basis (i.e., as the ΔH for specific amounts of reactants). However, we often find it more useful to divide one extensive property (ΔH) by another (amount of substance), and report a per-amount intensive value of ΔH, often “normalized” to a per-mole basis. (Note that this is similar to determining the intensive property of specific heat from the extensive of property heat capacity.)

As reserves of fossil fuels diminish and become more costly to extract, the search is ongoing for replacement fuel sources for the future. Among the most promising biofuels are those derived from algae (Figure 2). The species of algae used are nontoxic, biodegradable, and among the world’s fastest growing organisms. About 50% of algal weight is oil, which can be readily converted into fuel such as biodiesel. Algae can yield 26,000 gallons of biofuel per hectare—much more energy per acre than other crops. Some strains of algae can flourish in brackish water that is not usable for growing other crops. Algae can produce biodiesel, biogasoline, ethanol, butanol, methane, and even jet fuel.

According to the US Department of Energy, only 39,000 square kilometers (about 0.4% of the land mass of the US or less than

of the area used to grow corn) can produce enough algal fuel to replace all the petroleum-based fuel used in the US. The cost of algal fuels is becoming more competitive—for instance, the US Air Force is producing jet fuel from algae at a total cost of under 5 dollars per gallon.[1]The process used to produce algal fuel is as follows: grow the algae (which use sunlight as their energy source and CO2 as a raw material), harvest the algae, extract the fuel compounds (or precursor compounds), process as necessary (e.g., perform a transesterification reaction to make biodiesel), purify, and distribute (Figure 3).

Learn more about the process of creating algae biofuel.

There are two ways to determine the enthalpy changes involved in a chemical change: measure it experimentally, or calculate it from other experimentally determined enthalpy changes. Some reactions are difficult, if not impossible, to undertake in the controlled conditions of a calorimeter. Even when a reaction is not hard to perform or measure, it is convenient to be able to determine the energy changes involved in a reaction without having to perform an experiment.

This type of calculation usually involves the use of Hess’s law, which states: if a process can be written as the sum of several stepwise processes, the enthalpy change of the total process equals the sum of the enthalpy changes of the various steps. Hess’s law is valid because enthalpy is a state function: enthalpy changes depend only on where a chemical process starts and ends, but not on the path it takes from start to finish. For example, we can think of the reaction of carbon with oxygen to form carbon dioxide as occurring either directly or by a two-step process. The direct process is written:

In the two-step process, first carbon monoxide is formed:

The equation describing the overall reaction is the sum of these two chemical changes:

Because the CO produced in Step 1 is consumed in Step 2, the net change is:

The result is shown in Figure 4. We see that ΔH of the overall reaction is the same whether it occurs in one step or two. This finding (overall ΔH for the reaction = sum of ΔH values for reaction “steps” in the overall reaction) is true in general for chemical and physical processes. 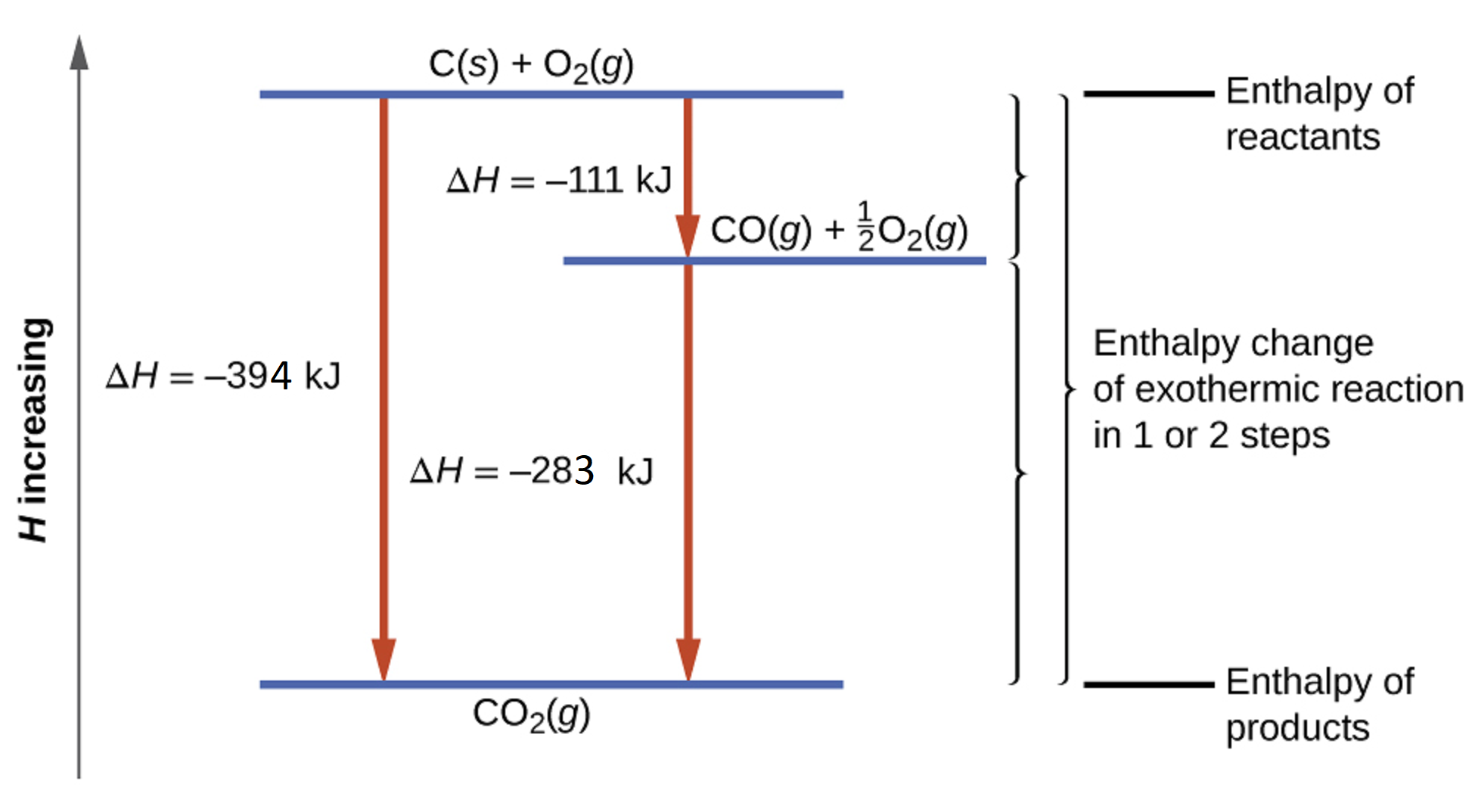 Determine the enthalpy of the reaction, ΔH°rxn, of FeCl3(s) from the enthalpy changes of the following two-step process that occurs under standard state conditions:

Looking at the reactions, we see that the reaction for which we want to find ΔH° is the sum of the two reactions with known ΔH values, so we must sum their ΔHs:

Check Your Learning
Calculate ΔH for the process:

from the following information:

Here is a less straightforward example that illustrates the thought process involved in solving many Hess’s law problems. It shows how we can find many standard enthalpies if they are difficult to determine experimentally.

Use the reactions here to determine the ΔH° for reaction (i):

Solution
Our goal is to manipulate and combine reactions (ii), (iii), and (iv) such that they add up to reaction (i). Going from left to right in (i), we first see that ClF(g) is needed as a reactant. This can be obtained by multiplying reaction (iii) by ½, which means that the ΔH° change is also multiplied by ½:

Next, we see that F2 is also needed as a reactant. To get this, reverse and halve reaction (ii), which means that the ΔH° changes sign and is halved:

To get ClF3 as a product, reverse (iv), changing the sign of ΔH°:

Now check to make sure that these reactions add up to the reaction we want:

Check Your Learning
Aluminum chloride can be formed from its elements:

Use the reactions here to determine the ΔH° for reaction (i):

set of physical conditions as accepted as common reference conditions for reporting thermodynamic properties; 1 bar of pressure, and solutions at 1 molar concentrations, usually at a temperature of 298.15 K

state function
property depending only on the state of a system, and not the path taken to reach that state