In the previous section, we discussed how we could qualitatively compare the strength of IMFs between two substances if we knew that they were different phases at the same temperature and pressure. We also used the fact that HCl(l) has a higher boiling point than F2(l) as evidence that it has stronger IMFs. In this section we expand on these concepts.

The increase in melting and boiling points with increasing atomic/molecular size may be rationalized by considering how the strength of dispersion forces is affected by the electronic structure of the atoms or molecules in the substance.

London Forces and Their Effects
Order the following compounds of a group 14 element and hydrogen from lowest to highest boiling point: CH4, SiH4, GeH4, and SnH4. Explain your reasoning.

Solution
Applying the skills acquired in the module on chemical bonding and molecular geometry, all of these compounds are predicted to be nonpolar, so they may experience only dispersion forces: the smaller the molecule, the less polarizable and the weaker the dispersion forces; the larger the molecule, the larger the dispersion forces. The molar masses of CH4, SiH4, GeH4, and SnH4 are approximately 16 g/mol, 32 g/mol, 77 g/mol, and 123 g/mol, respectively. Therefore, CH4 is expected to have the lowest boiling point and SnH4 the highest boiling point. The ordering from lowest to highest boiling point is expected to be CH4 < SiH4 < GeH4 < SnH4. 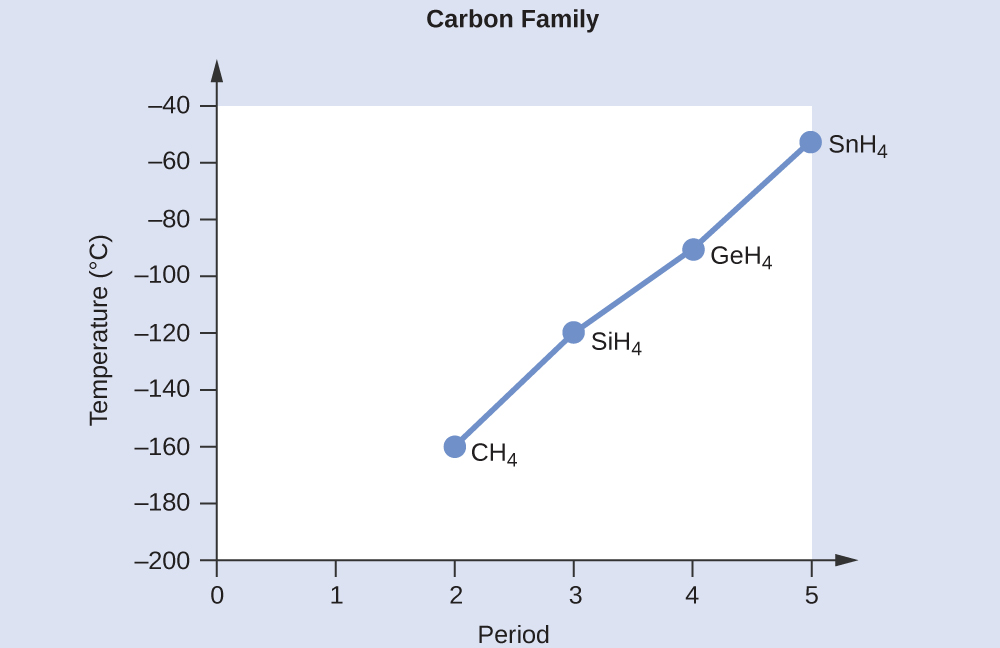 A graph of the actual boiling points of these compounds versus the period of the group 14 element shows this prediction to be correct:

Effect of Shape on London Forces and Boiling Points

As seen in the previous module, the shapes of molecules also affect the magnitudes of the dispersion forces between them. The previous section compared the isomers isopentane, n-pentane, and neopentane and ranked the strength of their IMFs. The boiling points of these isomers are 9.5 °C, 27 °C and 36 °C, in no particular order. Using what you know about how London forces are affected by the shape of a molecule, determine which boiling point corresponds to which isomer. Explain how you came to your conclusions. It may be useful to revisit the structures.

We saw in the previous section that n-pentane has the most elongated structure and that this increased surface area available for contact between molecules resulted in a stronger London force. Therefore, we would predict that n-pentane has the highest boiling point of 36 °C due to its strong dispersion forces. Since neopentane molecules are the most compact of the three and have the least available surface area for intermolecular contact, we would predict that this molecule would have a boiling point of 9.5 °C. This means that isopentane, having an intermediate surface area, would have a boiling point of 27 °C.

Now let’s compare two molecules with the same number of atoms and similar molecular weight, HCl and F2. Both of these molecules experience London forces, but only HCl has a dipole moment and would therefore experience dipole-dipole interactions. The higher normal boiling point (the boiling point at 1 atm, as will be discussed in the next section) of HCl (188 K) compared to F2 (85 K) is a reflection of the greater strength of dipole-dipole attractions between HCl molecules, compared to the attractions between nonpolar F2 molecules. We will often use values such as boiling or freezing points, or enthalpies of vaporization or fusion, as indicators of the relative strengths of IMFs of attraction present within different substances.

Dipole-dipole interactions do not definitively indicate a higher boiling point, however. Consider the trends in boiling points for the binary hydrides of group 15 (NH3, PH3, AsH3, and SbH3), group 16 hydrides (H2O, H2S, H2Se, and H2Te), and group 17 hydrides (HF, HCl, HBr, and HI). The boiling points of the heaviest three hydrides for each group are plotted in Figure 1. As we progress down any of these groups, the polarities of the molecules decrease slightly, whereas the sizes of the molecules increase substantially. The effect of increasingly stronger dispersion forces dominates that of increasingly weaker dipole-dipole attractions, and the boiling points are observed to increase steadily.

Dipole-Dipole Forces and Their Effects
Predict which will have the higher boiling point: N2 or CO. Explain your reasoning.

Check Your Learning
Predict which will have the higher boiling point: ICl or Br2. Explain your reasoning.

The Effect of Hydrogen Bonding on Boiling Point

The previous section introduced hydrogen bonds as a unique type of dipole-dipole interaction that occurs between an H atom attached to an N, O, or F atom on one molecule and the lone pairs on another N, O, or F atom on another molecule. If we use the trend in Figure 1 above to predict the boiling points for the lightest hydride for each group, we would expect NH3 to boil at about −120 °C, H2O to boil at about −80 °C, and HF to boil at about −110 °C. However, when we measure the boiling points for these compounds, we find that they are dramatically higher than the trends would predict, as shown in Figure 2. The stark contrast between our naïve predictions and reality provides compelling evidence for the strength of hydrogen bonding.

Effect of Hydrogen Bonding on Boiling Points
Consider the compounds dimethylether (CH3OCH3), ethanol (CH3CH2OH), and propane (CH3CH2CH3). Their boiling points, not necessarily in order, are −42.1 °C, −24.8 °C, and 78.4 °C. Match each compound with its boiling point. Explain your reasoning.

Solution
The VSEPR-predicted shapes of CH3OCH3, CH3CH2OH, and CH3CH2CH3 are similar, as are their molar masses (46 g/mol, 46 g/mol, and 44 g/mol, respectively), so they will exhibit similar dispersion forces. Since CH3CH2CH3 is nonpolar, it will exhibit only London dispersion forces. Because CH3OCH3 is polar, it will also experience dipole-dipole attractions. Finally, CH3CH2OH has an −OH group, and so it will experience the uniquely strong dipole-dipole attraction known as hydrogen bonding. So the ordering in terms of strength of IMFs, and thus boiling points, is CH3CH2CH3 < CH3OCH3 < CH3CH2OH. The boiling point of propane is −42.1 °C, the boiling point of dimethylether is −24.8 °C, and the boiling point of ethanol is 78.5 °C.

The physical properties of a substance depend on the IMFs that the substance experiences. The first step in predicting these physical properties is determining the type of IMFs that are present, which we discussed in the previous section. Some of these IMFs, such as dipole-dipole attraction, depend on the polarity of the molecule. The stronger the IMFs, the more energy that will be needed to melt or boil the substance. This means that the higher the melting or boiling point of a substance, the stronger its IMFs must be.