Knowledge of thermodynamic principles is essential for understanding chemistry, and indeed, all scientific disciplines. It is one thing to be able to predict the products of a precipitation reaction by applying solubility rules, for example, but to understand why the reaction occurs at a more fundamental level requires insight into the energy changes of the process. In fact when answering a question in chemistry that begins with the word “why”,  the answer will likely require a thermodynamic explanation. The laws of thermodynamics are fundamental to natural science. Our lives are governed by these laws, but there is no penalty for breaking them, because as far as we know they cannot be broken.

Thermal energy is the kinetic energy associated with the random motion of atoms and molecules. This molecular motion can include translation (directional movement), rotation (tumbling), and vibration (stretching and flexing along the bond axis between two atoms in a molecule), shown in Figure 1. Thermal energy is an extensive property, meaning that the amount of the substance matters. Referring to our water example, the 1.0 g of water at 50 °C has 100 times less thermal energy than the 100.0 g of water at 50 °C because there are fewer molecules in motion in the smaller sample.

Temperature is a quantitative measure of “hot” or “cold.” Recall from the previous module that temperature is a measure of the average translational kinetic energy per molecule in a gas, liquid, or solid. Referring to our water example, the 1.0 g of water at 50 °C has the same temperature as the 100.0 g of water at 50 °C, even though the thermal kinetic energy is 100 times greater in the 100.0 sample of water. Temperature is an intensive property, meaning that the amount of the substances does not matter.

Click on this interactive simulation to view the effects of temperature on molecular motion.

We can rearrange this equation to state that:

This relation just says that the energy that flows out of or into the system must exactly balance the energy that flow into or out of the surroundings. They must sum to zero. For example, if we measure the heat change in the water surrounding a chemical reaction, then we know the heat change in the chemical reaction is equal in magnitude and opposite in sign. Note that in this example the system can be the reactants and products dissolved in water, while the surroundings are the water itself. This is the common case for coffee-cup calorimetry that will be discussed in a later section. 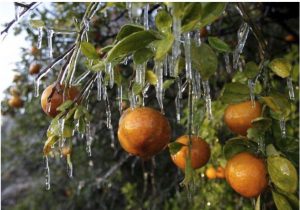 Solution
As water freezes, bonds are made between water molecules and the physical change is exothermic; heat flows from the system to the surroundings. Here, the system is the water on the surface of the fruit and the surroundings includes the fruit. Heat flows from the water to the fruit, keeping the fruit from cooling to the air temperature which can be much lower than the ) 0 oC temperature at which pure water freezes.

Check Your Learning
Determine the direction of heat flow when hydrogen gas is ignited in the presence of oxygen gas to from water vapor.

surroundings
all matter other than the system being studied