Recall the relationship between the amount of heat absorbed or released by a substance, q, and its accompanying temperature change, ΔT, already introduced in this module:

where m is the mass of the substance and c is its specific heat. The relation applies to matter being heated or cooled, but not undergoing a change in state. When a substance being heated or cooled reaches a temperature corresponding to one of its phase transitions, further gain or loss of heat is a result of diminishing or enhancing intermolecular attractions, instead of increasing or decreasing molecular kinetic energies. While a substance is undergoing a change in state, its temperature remains constant. Figure 1 shows a typical heating curve. Notice that heat (q) is on the x-axis since it is the independent variable. As heat is added, the temperature of the substance changes. Temperature is the dependent variable, and it’s placed on the y-axis. Notice that the slope of the line is positive as heat is added to ice at -10 °C. Once the ice is heated to 0 °C (the melting point of water), the line is flat (slope = 0) since no temperature change occurs as the phase change occurs. Once all the ice is melted, adding more heat will increase the temperature of the liquid water until the boiling point is reached. Then the liquid water boils and no temperature change occurs until all the liquid water is converted to steam (gaseous water). The heat required to melt water is significantly less than the amount of heat required to boil water. The graph illustrates this difference in the length of the segments representing melting and boiling.

Consider the example of heating a pot of water to boiling. A stove burner will supply heat at roughly a constant rate; initially, this heat serves to increase the water’s temperature. When the water reaches its boiling point, the temperature remains constant despite the continued input of heat from the stove burner. This same temperature is maintained by the water as long as it is boiling. If the burner setting is increased to provide heat at a greater rate, the water temperature does not rise, but instead the boiling becomes more vigorous (rapid). This behavior is observed for other phase transitions as well: temperature remains constant while the change of state is in progress.

When we heat a crystalline solid, we increase the average energy of its atoms, molecules, or ions and the solid gets hotter. At some point, the added energy becomes large enough to partially overcome the forces holding the molecules or ions of the solid in their fixed positions, and the solid begins the process of transitioning to the liquid state, or melting. At this point, the temperature of the solid stops rising, despite the continual input of heat, and it remains constant until all of the solid is melted. Only after all of the solid has melted will continued heating increase the temperature of the liquid (Figure 2). 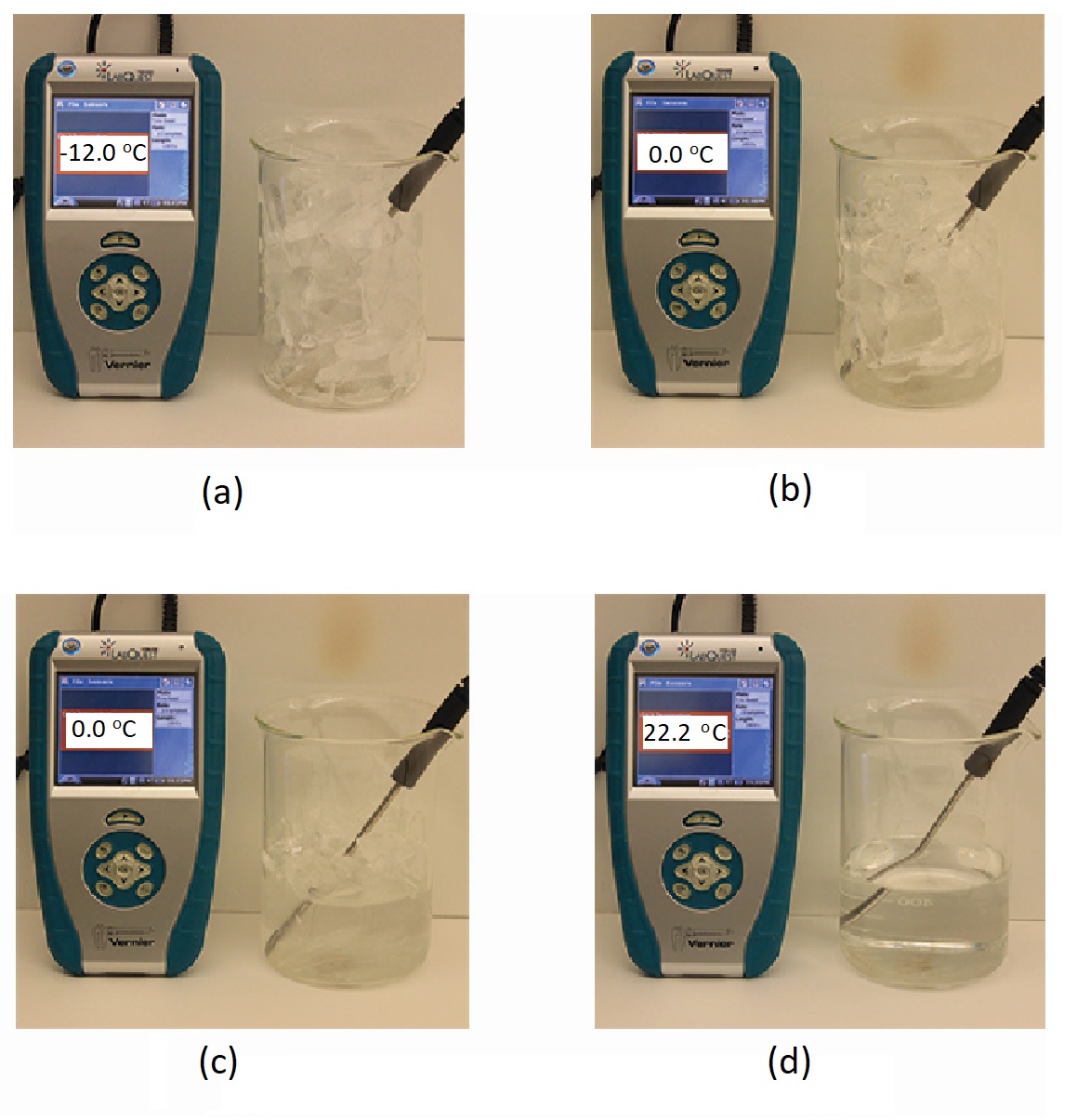 The energy change associated with the melting or freezing processes is the enthalpy of fusion, ΔHfus. This is the energy required to melt 1 mole of substance. For example, the melting of water is endothermic and at standard temperature is represented by:

The freezing of water is the reverse process and is exothermic, and therefore opposite in sign:

Vaporization is an endothermic process by which a liquid undergoes a phase change to a gas. Since vaporization is an endothermic process, this means that the system absorbs heat and the surroundings release heat, causing a cooling effect. The cooling effect can be felt when you leave a swimming pool or a shower. When the water on your skin evaporates, it absorbs heat from your skin and causes you to feel cold.

Evaporating 1 mole of liquid water at a higher temperature requires less energy than its evaporation at 25 oC. The enthalpy of vaporization for 1 mole water at its boiling point of 100 oC, is 40.67 kJ/mol.

As described in this module, the reverse of an endothermic process is exothermic. The reverse of vaporization of condensation, a process in which a gas becomes a liquid. Thus, the condensation of a gas releases heat:

It’s crucial to note that for water, the enthalpy of vaporization (liquid to gas phase change, 44.01 kJ/mol) is over seven times greater than the enthalpy of fusion (solid to liquid phase change, 6.0 kJ/mol). Why is this the case? We shall learn about hydrogen bonds in later modules on intermolecular forces. For the phase change from solid to liquid, the hydrogen bonds are only partially disrupted. However, for the phase change from liquid to gas, the hydrogen bonds must be completely broken as the water vapor molecules ideally do not interact at all. Completely breaking these bonds during vaporization requires much more energy than during melting.

Some solids can transition directly into the gaseous state, bypassing the liquid state, via a process known as sublimation. At room temperature and standard pressure, a piece of dry ice (solid CO2) sublimes, appearing to gradually disappear without ever forming any liquid. Snow and ice sublime at temperatures below the melting point of water, a slow process that may be accelerated by winds and the reduced atmospheric pressures at high altitudes. When solid iodine is warmed, the solid sublimes and a vivid purple vapor forms (Figure 3). The reverse of sublimation is called deposition, a process in which gaseous substances condense directly into the solid state, bypassing the liquid state. The formation of frost is an example of deposition.

Like vaporization, the process of sublimation requires an input of energy to overcome intermolecular attractions. The enthalpy of sublimation, ΔHsub, is the energy required to convert one mole of a substance from the solid to the gaseous state. For example, the sublimation of carbon dioxide is endothermic and is represented by:

Likewise, the enthalpy change for the reverse process of deposition is equal in magnitude but opposite in sign to that for sublimation:

We were able to quantify the heat flow when a temperature change occurs using the relationship, q = m c ΔT. This equation is not useful for determining the heat flow during a phase change, however, because there is no temperature change (as shown in Figure 1 above). Using this equation when ΔT = 0 °C would yield q = 0, which we know is not true. Therefore, in order to calculate the amount of heat required for a phase transition, we need to use the enthalpy of the phase change. For example, one can calculate the amount of heat required to melt a given amount of a substance by taking into account the enthalpy of fusion of the substance and the amount of that substance (m, mass or n, moles, depending on the units of ΔHfus):

Quantifying the heat flow during vaporization and condensation would follow the same logic. We can summarize this using the following equation:

In this equation, q is the heat flow and ΔHphase change represents the enthalpy for the phase change, with the appropriate sign to indicate whether heat is flowing into or out of the system. In this equation, we have m representing the amount of substance undergoing the phase change. It is important to watch your units here — sometimes ΔH values are given in units of kJ/mol, sometimes in units of kJ/g, or even in J/g. The units will depend on what makes sense for the situation. Whether you use a mass for m or moles for m depends on what the units of ΔH are. Make sure that your units cancel appropriately using dimensional analysis, as always. The units of ΔH will also provide you with the unit of q (typically either J or kJ).

Total Heat Needed to Change Temperature and Phase for a Substance
How much heat is required to convert 135 g of ice at −15 °C into water vapor at 120 °C?

Using these equations with the appropriate values for specific heat of ice, water, and steam, and enthalpies of fusion (at 0 oC) and vaporization (at 100 oC), we have:

Hint: Be careful with energy units! (convert joules to kilojoules)

This value is positive since the question asked about the amount of heat released. The calculation should lead to q  =  -68.7 kJ.

Phase transitions are processes that convert matter from one physical state into another with no change in temperature. There are six phase transitions between the three phases of matter. Melting, vaporization, and sublimation are all endothermic processes, requiring an input of heat to overcome intermolecular attractions. The reciprocal transitions of freezing, condensation, and deposition are all exothermic processes, involving heat as intermolecular attractive forces are established or strengthened.

A heating curve depicts the amount of energy added or subtracted on the x-axis and the temperature of the substance on the y-axis. When determining the q for a heating curve, the phase transition line segments must be calculated separately from the temperature change segments since there are different processes for calculating the q values.

condensation
change from a gaseous to a liquid state

deposition
change from a gaseous state directly to a solid state

freezing
change from a liquid state to a solid state

freezing point
temperature at which the solid and liquid phases of a substance are in equilibrium; see also melting point

melting
change from a solid state to a liquid state

melting point
temperature at which the solid and liquid phases of a substance are in equilibrium; see also freezing point