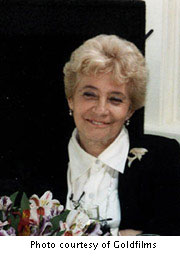 If this is the first time you are using a RAILS lesson, we recommend that you take a look at the page About the lessons to make sure that you understand how some features of the lessons work.

This is the fifth lesson in a series of nine based on films by Marina Goldovskaya. It is the fourth lesson on the film «Власть соловецкая». In this lesson you will watch two clips from an interview with Marina Goldovskaya about her film. You will also listen to audio clips of others’ opinions of Goldovskaya’s film. The lesson consists of four parts: Выход фильма, Значение фильма, Другие о фильме, and Заключение.

You can find the Помощник and Словарь at the end of the lesson for easy reference, but they are also available in the lesson in places where you are most likely to need them.

What You Will Learn:

Remember that this film came out in the late 1980’s, the period of Gorbachev’s glasnost policy. However, many Russians were wary of exercising newfound freedoms because there was no telling when this new era might suddenly end.