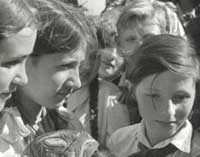 If this is the first time you are using a RAILS lesson, we recommend that you take a look at the page About the lessons to make sure that you understand how some features of the lessons work.

This is the eighth lesson in a series of nine based on films by Marina Goldovskaya. It is also the third of four lessons based on the documentary film «Дети Ивана Кузьмича».

The lesson consists of five parts: Отдельный мир, Беда, Родители, Чудо Кузьмича, and Заключение. You will watch four clips from the film, including some archival documentary footage from the 1930s.

You can find the Помощник and Словарь at the end of the lesson for easy reference, but they are also available in the lesson in places where you are most likely to need them.

What You Will Learn:

You will learn about school life in Russia in the 1930s, and about a way the values in school 110 were different from values in an average Soviet school.

You will learn how Иван Кузьмич managed to create a safe and fair atmosphere in the school, and to make it into a world that was separate from the rest of the country.

You will also learn about some famous people whose children were students at school 110 in the 1930s.

Finally, you will learn about the fates of some of the parents and their children.

This lesson is based on the film «Дети Ивана Кузьмича». Use of excerpts from the films Solovky Power and Children of Ivan Kuzmich in the RAILS lessons is courtesy of Goldfilms.