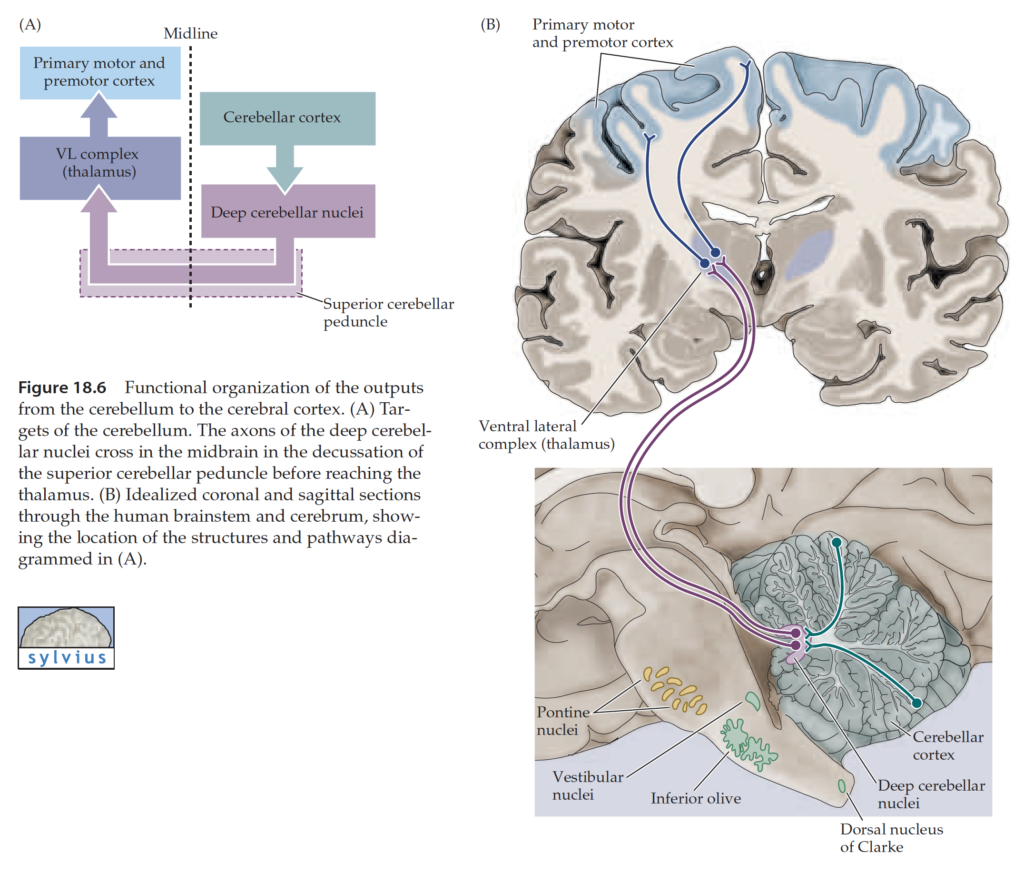 The cerebellum receives two types of afferent inputs: climbing fibers (CF), which originate from the inferior olivary nucleus in the medulla, and mossy fibers (MF), which originate from multiple sources (spinal cord, pontine nuclei (PN), reticular formation, vestibular nuclei). Input fibers synapse on neurons in both CBX and DCN.  The bulk of CBX output neurons (Purkinje cells) project first to DCN rather than directly out of CB. 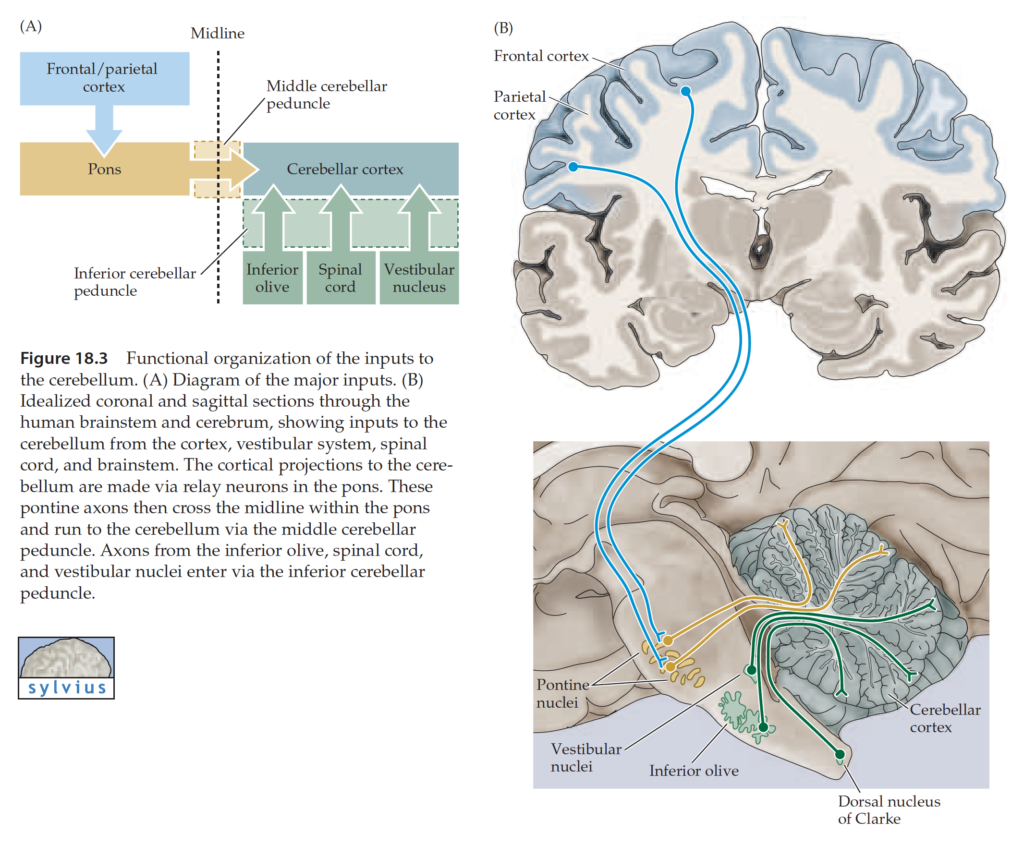 Each of the major sagittally oriented cerebellar subdivisions are compartmentalized into a series of parasagittal strips (for review see: Voogd and Glickstein 1998). Later studies have confirmed that cerebellar cortical afferents and efferents travel within these strips, or zones and, therefore, function relatively independently from one another. 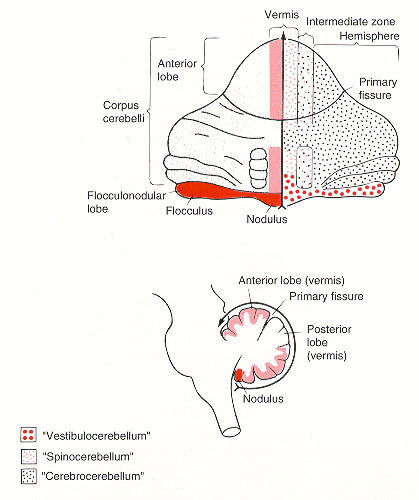 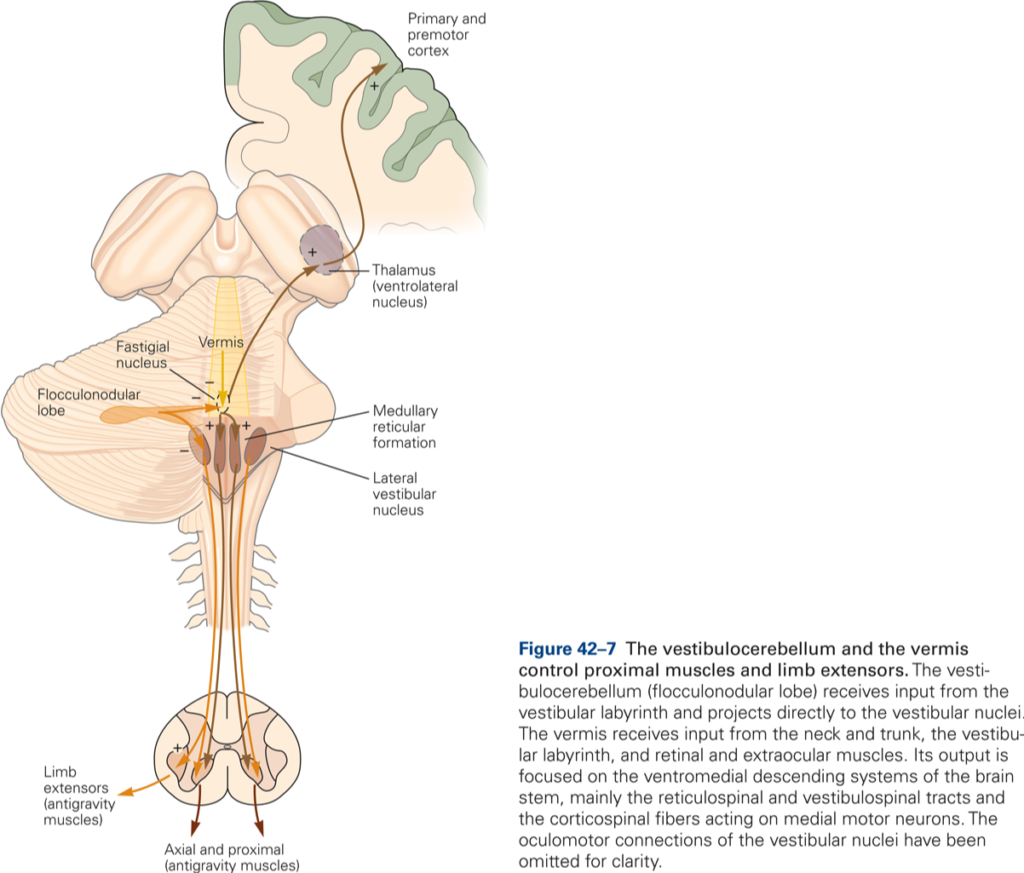 The main body of the CB is divided into three longitudinally arranged subdivisions: medial, intermediate, and lateral.  Together the medial and intermediate subdivisions are referred to as the spinocerebellum, the lateral subdivision is called the cerebrocerebellum.

Medial and intermediate zones receive somatosensory information from spinal cord via spinocerebellar tracts: the dorsal and ventral spinocerebellar tracts (DSCT and VSCT, respectively) are the pathways from the trunk and legs; the cuneocerebellar tract (CCT) and rostral spinocerebellar tract (RSCT) from the arms and neck. The DSCT arises from cells of Clark’s column in the lumbar spinal cord; the CCT originates from cells in the external cuneate nucleus in the medulla. Neurons in Clark’s column and in the external cuneate nucleus receive direct input from muscle spindles, GTO, joint and cutaneous receptors.  DSCT and CCT transmit information about current limb position.  VSCT and RSCT transmit information about the activity of spinal interneurons (such as the group Ia and Ib interneurons, which integrate descending and peripheral inputs).  Intermediate zone receives additional inputs from motor cortex via the PN. 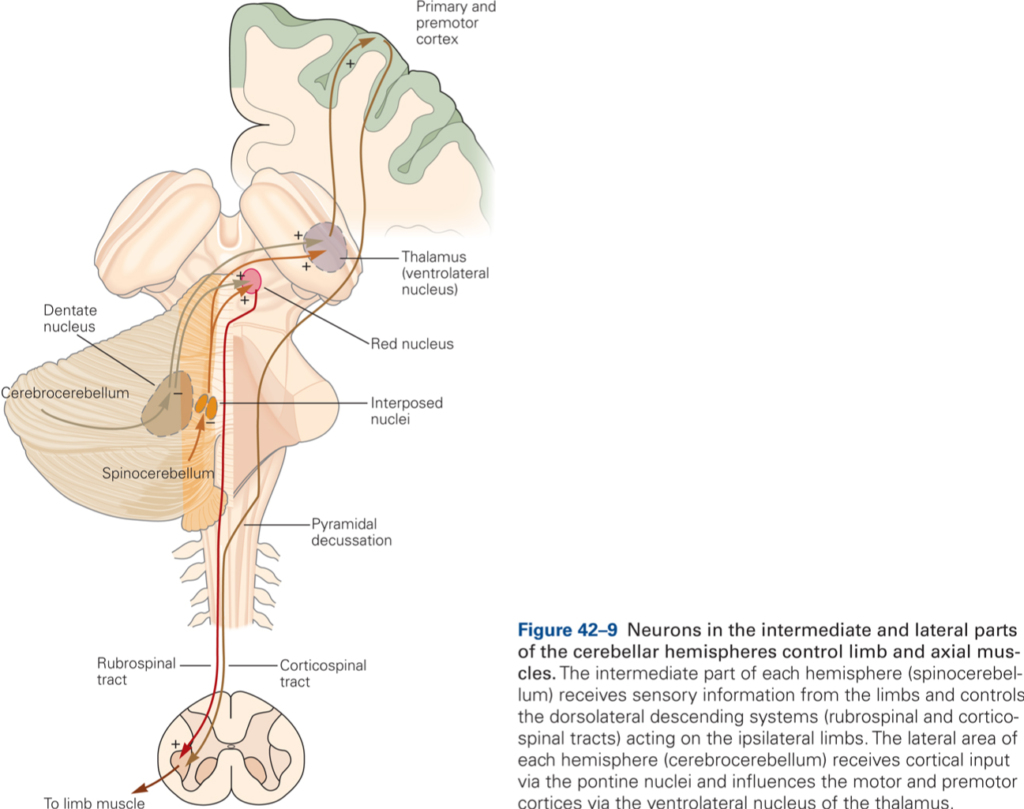 Spinocerebellum controls execution of movement and regulates muscle tone.  Intermediate CB compares the actual limb position as provided by spinocerebellar input with the desired limb position provided by information about movements from higher brain centers, such as motor cortex.  When actual and desired limb position differ (for example because variations in load are encountered during the movement), intermediate CB issues signals that are used to minimize the mismatch.  These signals are transmitted via the rubrospinal and corticospinal tracts. Intermediate CB is involved with the detailed execution of movement.

Input to cerebrocerebellum derives from sensory and motor cortices and premotor and parietal cortices (via the PN).

Output of cerebrocerebellum derives from the dentate nucleus and targets (via VL thalamus) motor and premotor areas of cerebral cortex. Major function of cerebrocerebellum is in the planning and sensory (especially visual) guidance of movement. The lateral cerebellar zone receives visual information appropriate for guidance of movement from posterior parietal cortex (PPC). PPC relates somatosensory information about limb position with visual information about location of objects in extrapersonal space.

Lateral CB compares target location with limb position. Using continuous visual feedback to compare target location and limb position is not the preferred way to provide visual guidance because this process is slow and fast out of date with moving stimuli. Lateral CB is involved in predictive control, its signals predict where the limb is going to be based on how fast the target is moving.