Making Sense of Our Senses 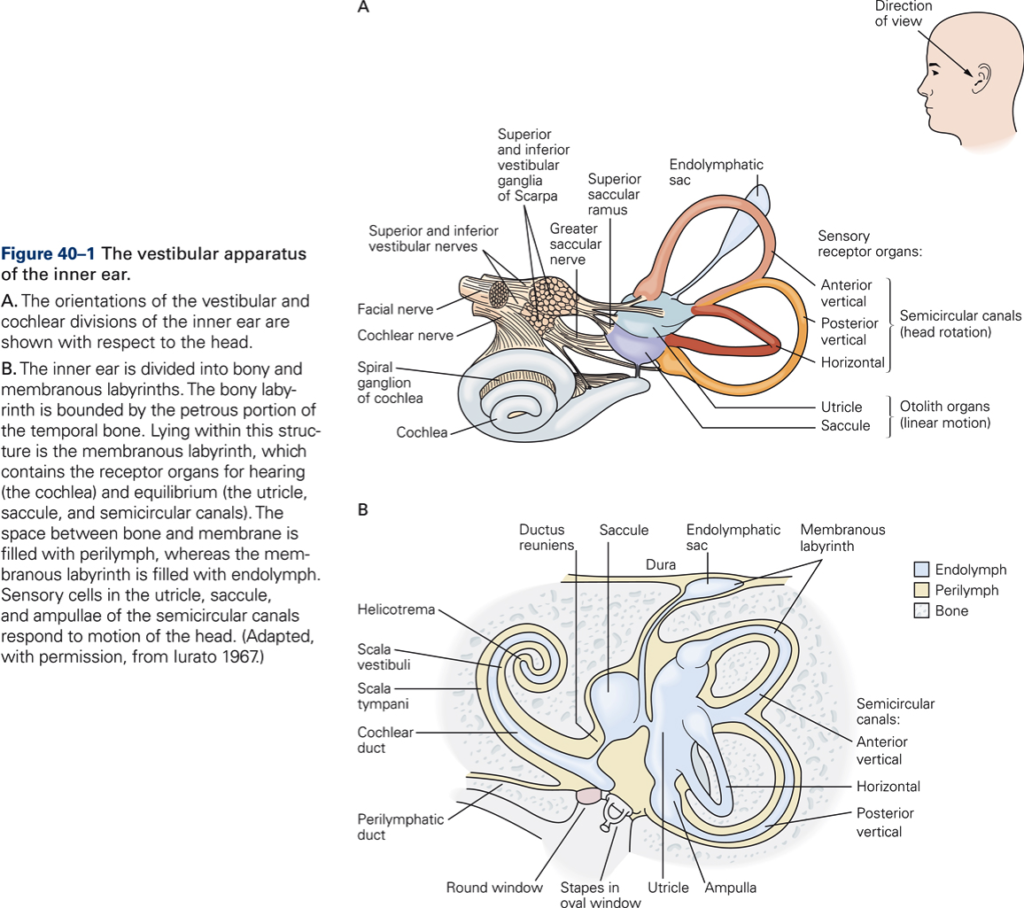 Three semicircular canals are arranged in planes perpendicular to one another. They are filled with fluid called endolymph. Each canal has a thickened portion called ampulla that contains specialized receptor cells, the vestibular hair cells. Within the ampulla, the hair cells lie on the ampullary crest. The ampullary crest is covered by a gelatinous mass called the cupula. When the head is rotated, the rotatory force exerted on the cupula by the fluid produces a displacement of the sensory hairs on the receptor cells. 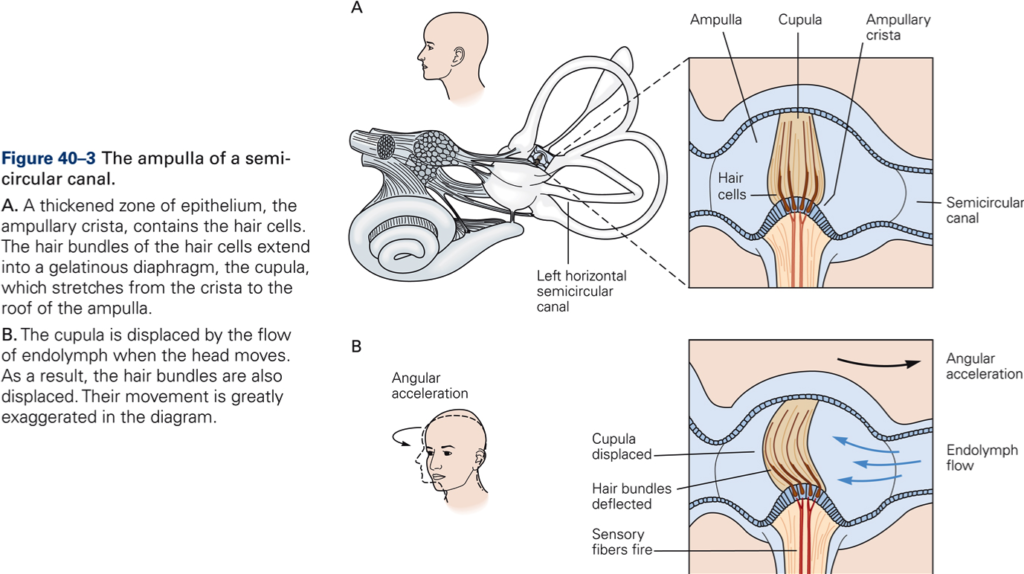 The hairs are differentiated into 40-70 stereocilia and a single kinocillium. The stereocilia are of varying length and are arranged according to length, with the longest (kinocillium) on one end of the hair bundle. Hair cells release transmitter continuously and therefore fire action potentials continuously. Bending hair cells in the direction of the kinocilium depolarizes the cell, and thus increases firing rate, whereas bending away from the kinocilium hyperpolarizes the cell, and thus reduces the firing rate.

The utricle is organized to detect tilt of the head 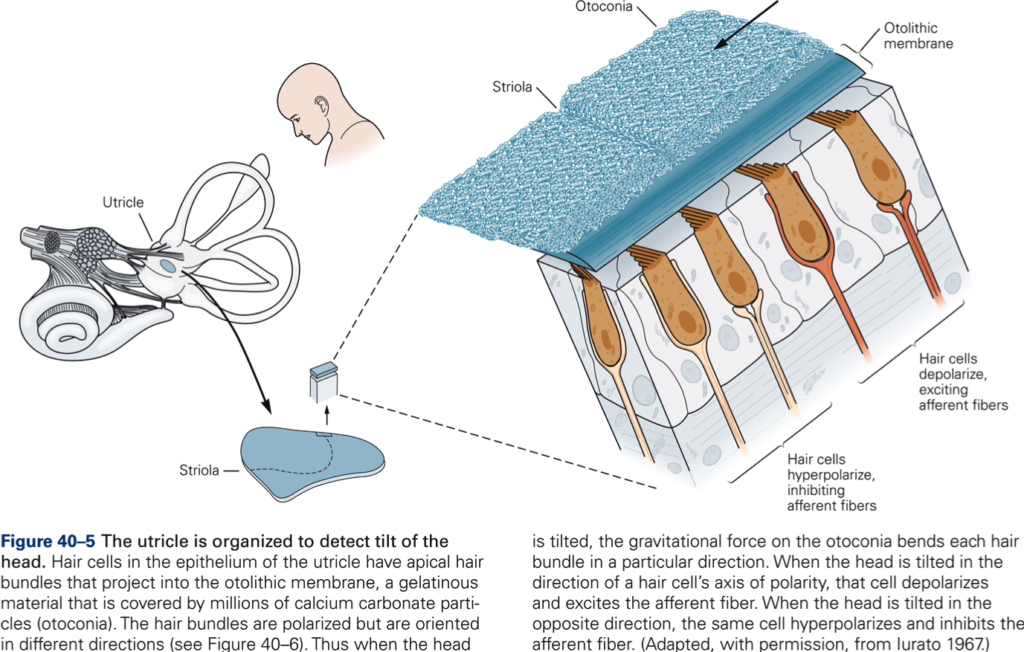 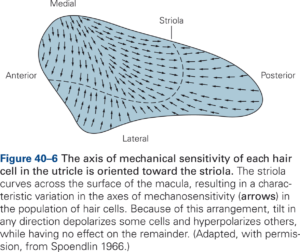 Within each otolith receptor, hair cells are located in an area called the macula. The macula is covered with gelatinous mass in which are embedded crystals of calcium carbonate, called otoliths. The macula of the utricle is oriented in the horizontal plane, that of saccule in the vertical plane. Both utricle and saccule detect static head tilt by bending of hair cells by otoliths. They also respond to linear acceleration of the head, utricle to linear acceleration in the horizontal plane, saccule to linear acceleration in the vertical plane. Different hair cells in the macula of the utricle are arranged in different directions so that the utricle can detect tilt of the head in any direction. All utricular hair cells together provide accurate information about head position. 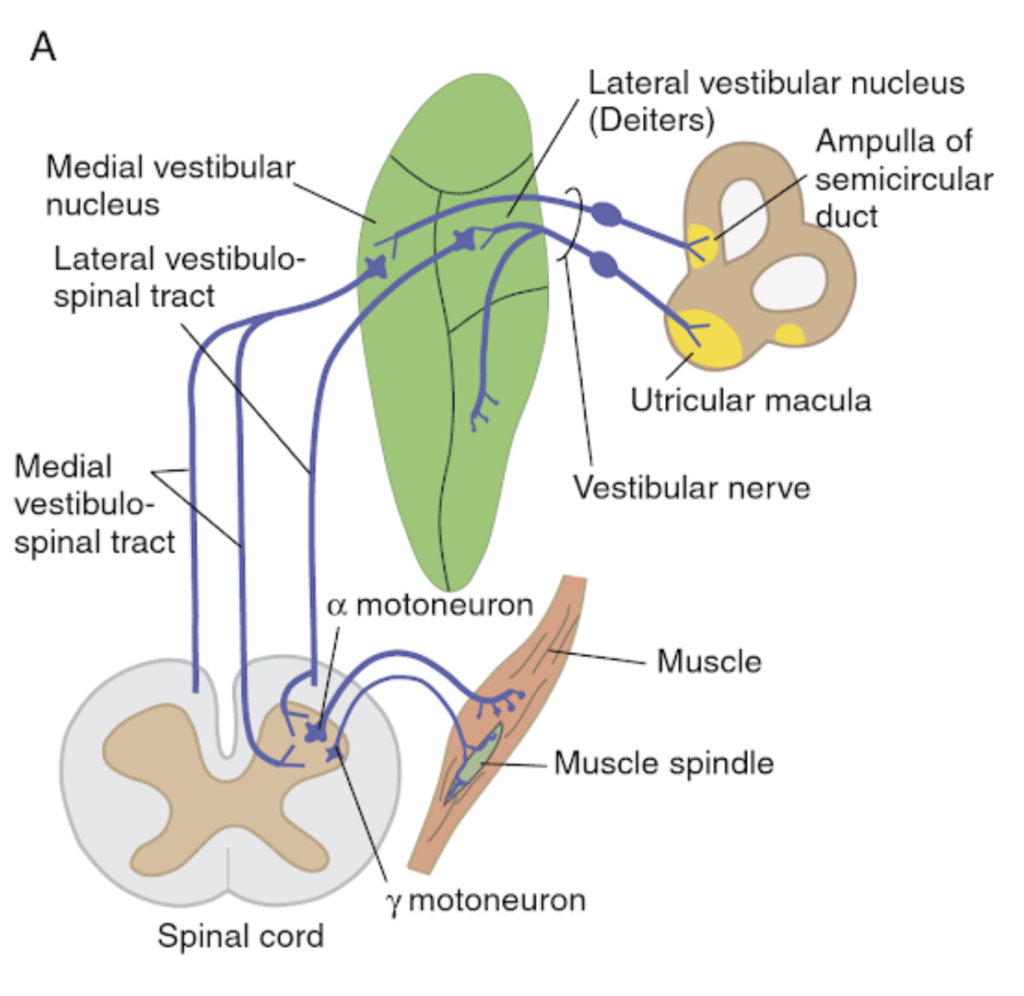 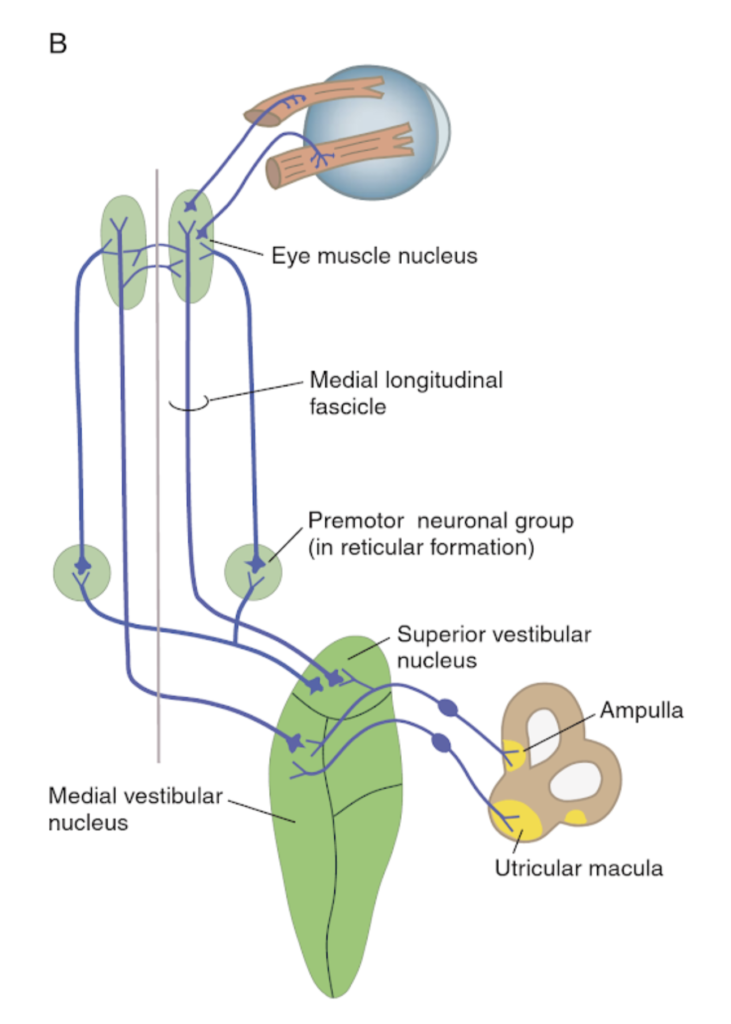 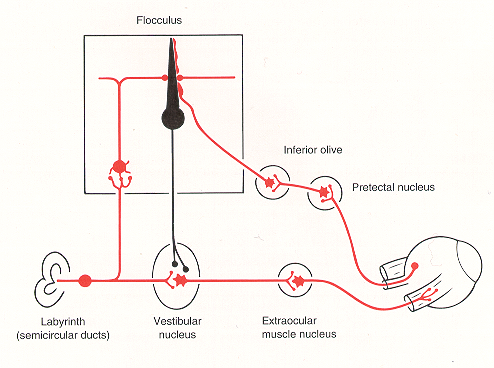 Two types of postural reflexes align the head and body:

Acts on neck muscles, object is to keep head level

Acts on limb muscles, object is to prepare body for fall

Act on extraocular muscles, object is to align eyes and head to stabilize images on retina

Acts on neck muscles (contracts muscle that is stretched), object is to realign head with body. Synergistic with vestibulocollic reflexes

Acts on limb muscles, synergistic or antagonistic with vestibulospinal reflexes

EX: ventriflexing the neck elicits flexion of forelimbs and extension of hind limbs 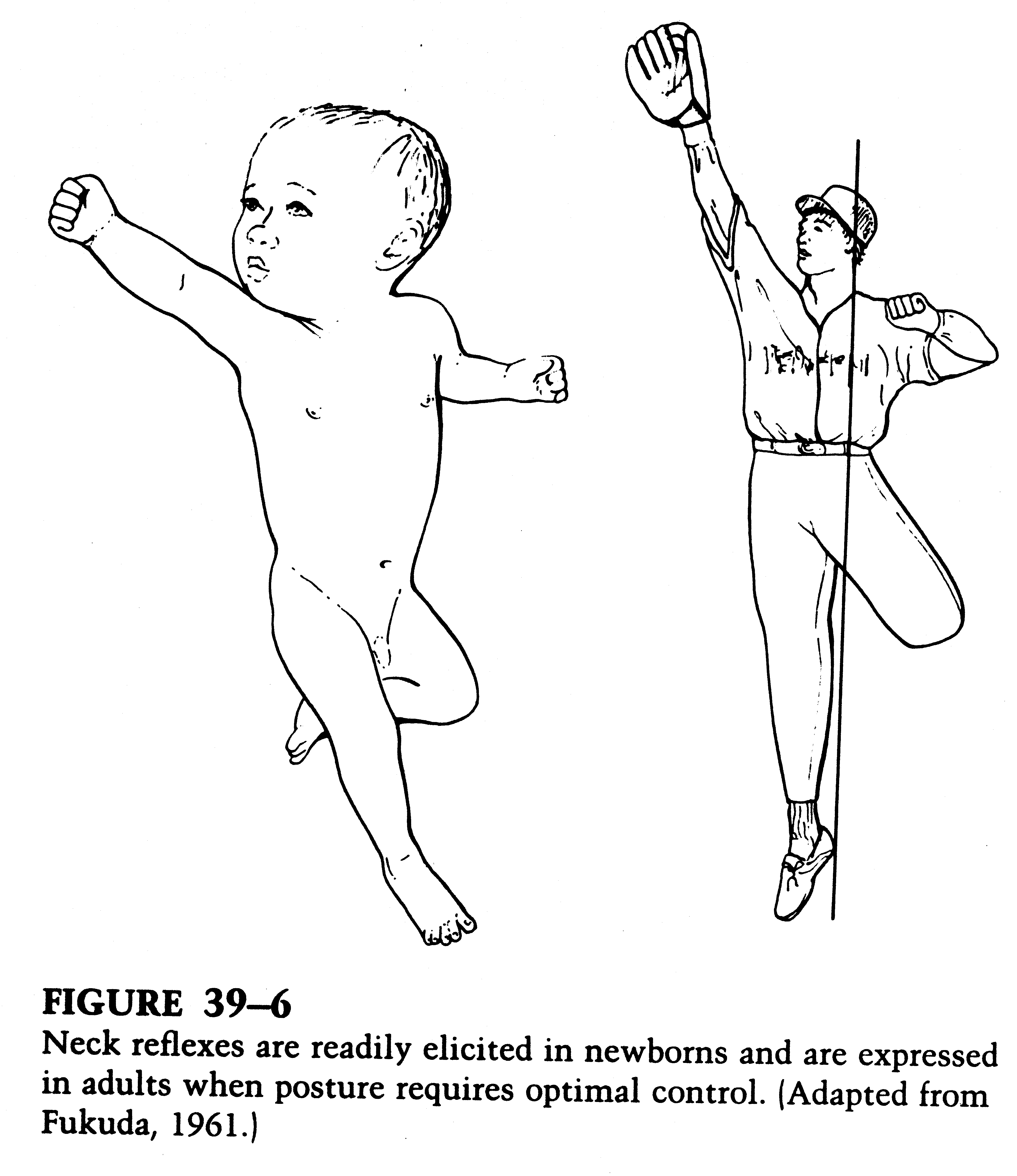 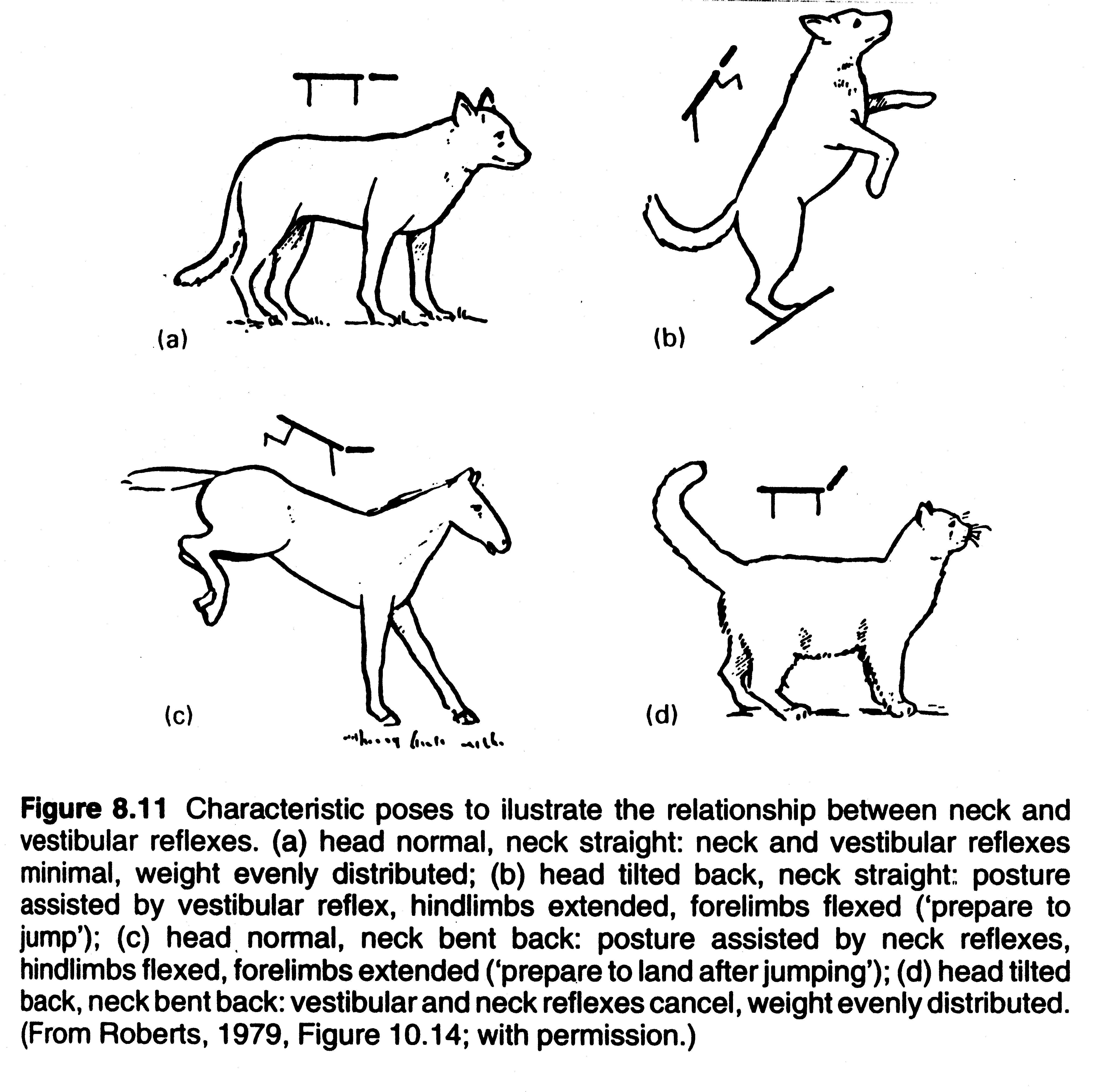 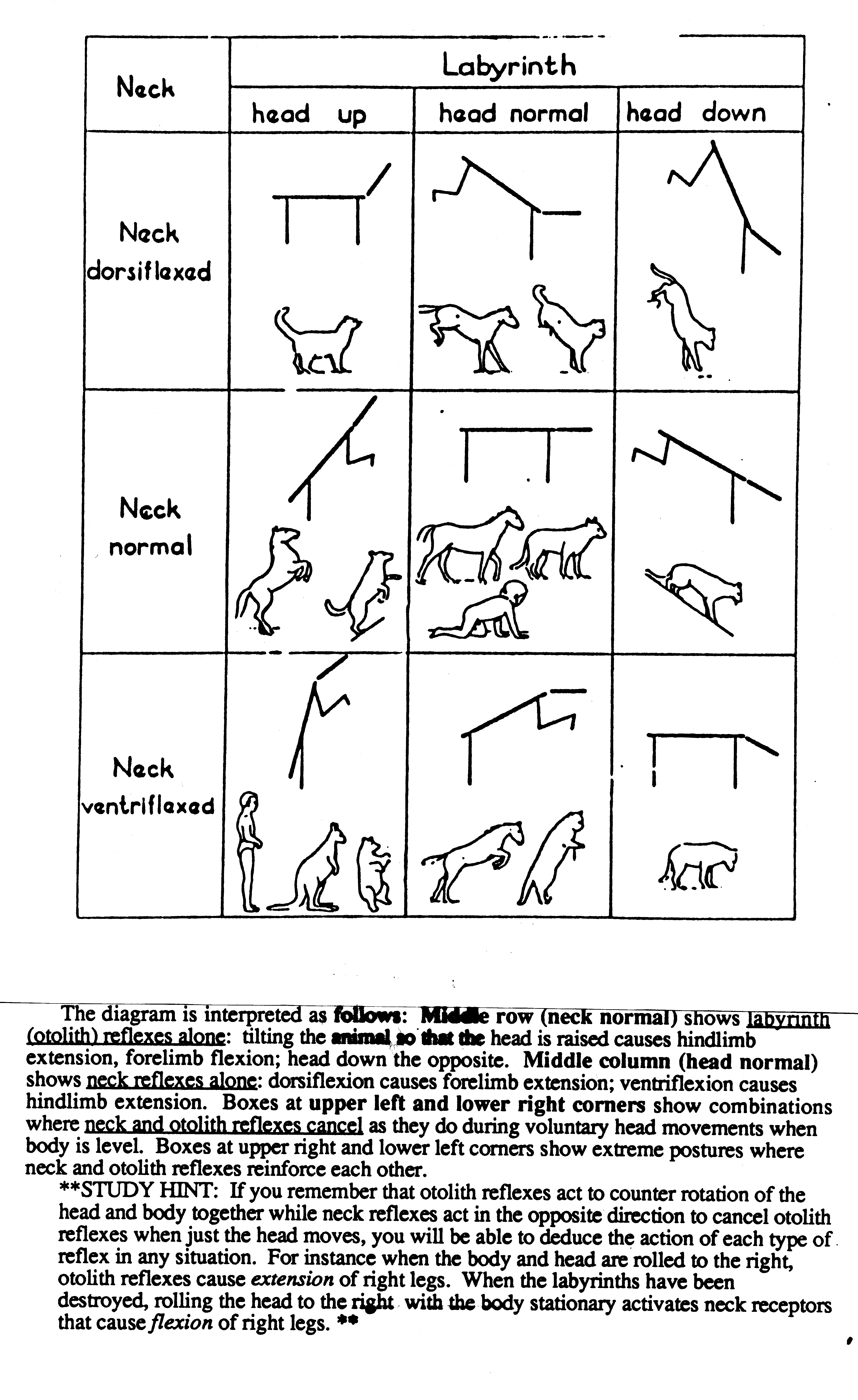