The cerebellar cortex is composed of 5 main neuron types. These are arranged with perfect geometrical precision throughout the cortex. One area of cortex is indistinguishable from another. Although not yet understood, it is widely held that the key to understanding the cerebellum is to understand the relationship between mossy and climbing fibre inputs. 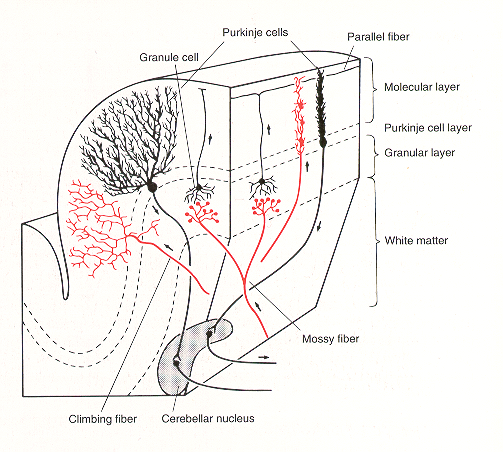 The synapse between CF and P cell is extremely powerful: a single action potential in the CF produces firing of the P cell (complex spike).  CF fire at low rates (~1 spike/s).  In contrast to CF, MF fire action potentials at high rates and are thought to transmit detailed parameters of movement.  MFs generate simple spikes in PCs.

CB damage prevents modification and adaptation of behaviors, that is, the CB has a function in motor learning. Motor learning is defined as a set of processes associated with practice or experience leading to relatively permanent changes in skilled behavior.

The central postulate in any theories of a role of CB in motor learning is that the activity in CF can modulate the effectiveness of the PF – P cell synapse (CF ‘teaches’ CBX how to respond to particular patterns of PF inputs.  Thus during the learning period we would expect an increase in CF activity, which should decrease once learning is complete.  Over the same period, simple spike activity of P cells evoked by PF input should change (increase if CF increase synaptic efficacy) and should remain at a new value after CF activity had returned to normal à a long-term change in synaptic effectiveness of PF is produced by a short-term change in CF discharge.  Evidence for such a scheme has been obtained from recording experiments in monkey.  Additional evidence for a role of CB in motor learning is derived from studies of adaptation of the vestibuloocular reflex (VOR) and from studies using classical conditioning of eye blink reflex.  CB damage or lesions prevent VOR adaptation and prevent learning and retention of conditioned response.

Although it is generally agreed upon that CB plays a role in motor learning, there is much debate about whether CB is the primary site of learning or whether it is necessary for learning to occur and the ‘memory’ is stored somewhere else.  In other words, are the synaptic changes which occur during learning in the cerebellum?