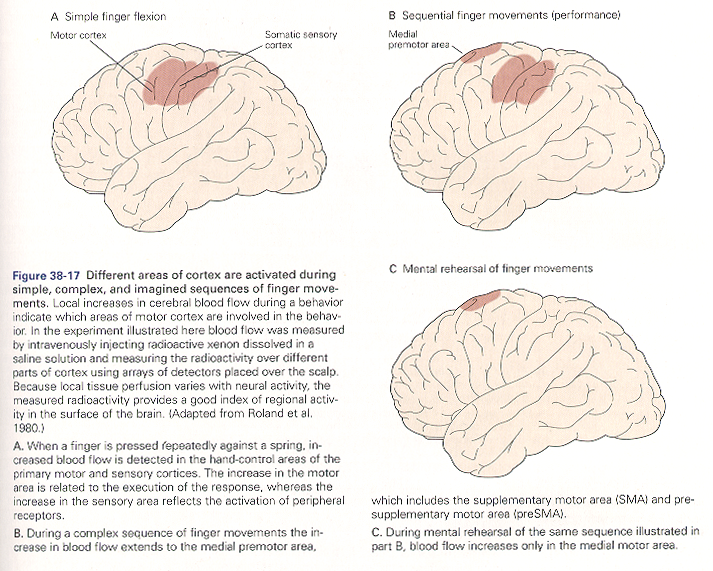 Motor deficits in monkeys with lesions in SMA:

SMA is important for coordinating posture with voluntary movement

Subjects were asked to not move their elbow joint when a weight placed on their wrist was suddenly removed.  Successful performance of the task depended on whether the weight was removed actively (by the subject) or passively (by the experimenter). 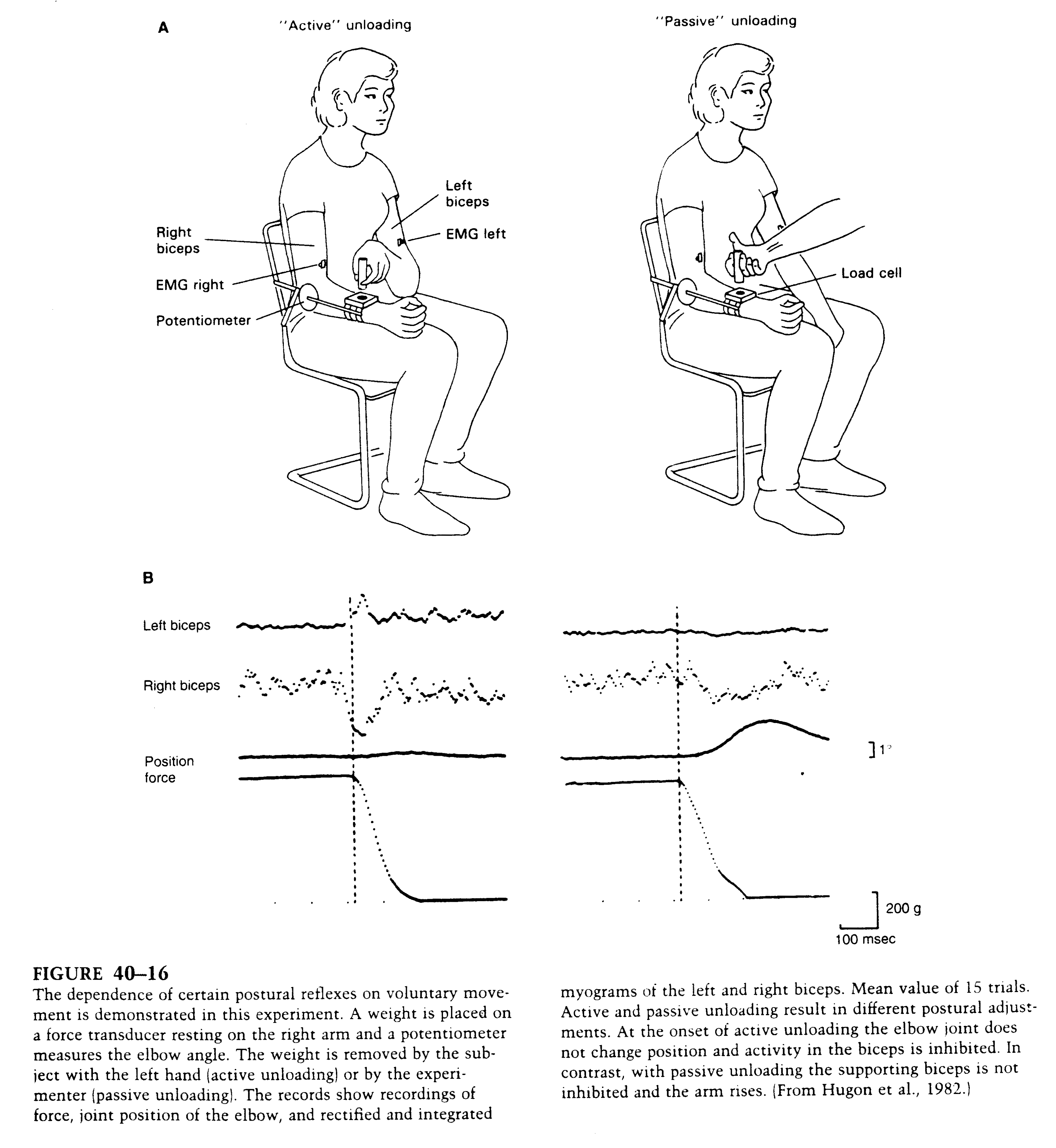 Patients with unilateral lesions of the SMA are unable to successfully complete task when weight was removed actively or passively from the affected (contralateral) arm à during performance of a voluntary movement two relatively independent but coordinated motor programs operate.  One to initiate the limb movement; the other generates anticipatory postural adjustments.  The second one requires an intact SMA.

PM is involved with the sensory guidance of movement

PM contributes to controlling proximal movements that project the arm to targets.  Main input to PM is from posterior parietal cortex which is important for providing the visual information for targeted movements.  The main output of PM is to nuclei of the medial descending brainstem pathways (medullary reticular formation) that project to axial and proximal musculature.  à PM involved with the control of proximal and axial muscles and with orienting body and arm to a target. 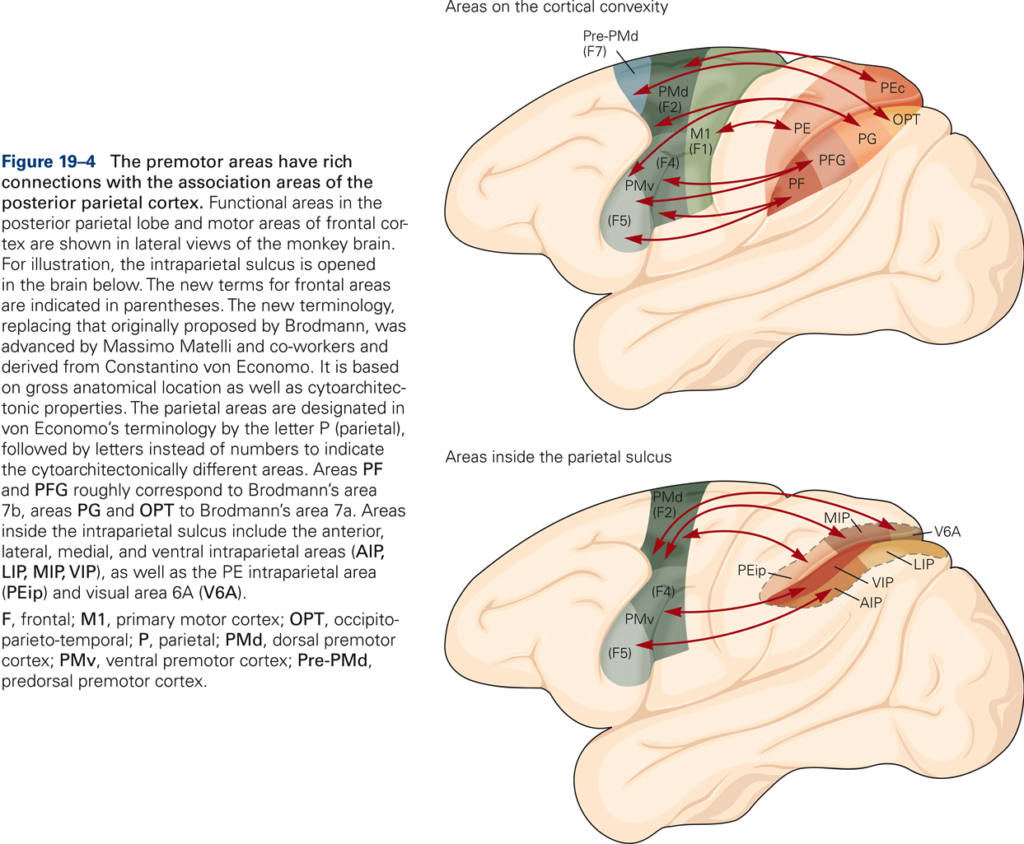 PM is involved with the preparation for motor action

Motor programming: the assembly of motor subroutines for later execution or the assembly of force and timing specifications for all muscle involved in an individual movement, including the prime mover and postural support muscles.

Motor set: the general readiness to make a particular movement

The idea that PM plays a role in motor set can be tested by studying the activity of PM cells during an instructed delay period, that is after an animal has received an instruction for a limb movement, but before it has received a signal allowing it to execute the movement. 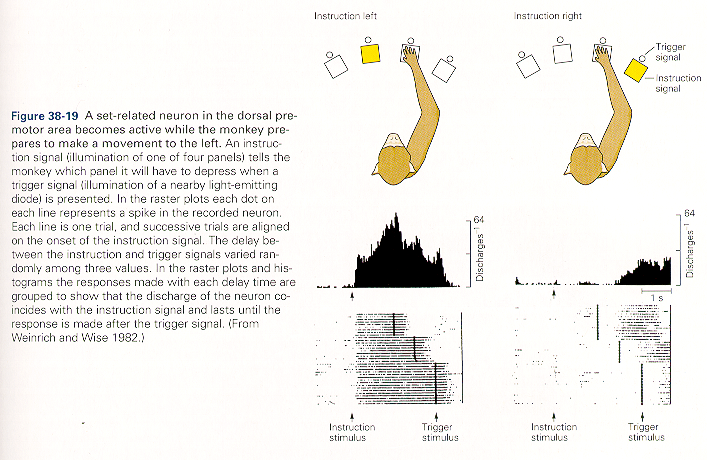 PM is involved with the suppression of lower motor acts

PM may suppress relatively automatic responses to certain sensory stimuli.  For example, monkeys with lesions of PM continued to reach directly towards a desired abject, even when the pathway was obstructed by a transparent barrier and an alternative trajectory would have been successful. Thus, no suppression of direct and immediate reaching for object (perseveration).

Why do sports fans feel so emotionally invested in the game, reacting almost as if they were part of the game themselves? According to provocative discoveries in brain imaging, inside our heads we constantly “act out” and imitate whatever activity we’re observing. As this video reveals, our so-called “mirror neurons” help us understand the actions of others and prime us to imitate what we see [source: PBS NOVA scienceNOW].