The rubrospinal and corticospinal tracts are parallel pathways that connect cerebellar output to spinal circuitry.  We have studied intermediate cerebellum, and its associated circuitry as a model system for how the brain generates motor commands.  The studies I am presenting focus on recordings of cells in the magnocellular red nucleus, or RNm for short, which gives rise to rubrospinal fibers.  Our motivation for studying magnocellular red nucleus is that understanding its role in motor control would constitute a major step toward understanding how the cerebellum influences descending motor pathways.  Major input from RNm derives from nucleus interpositus, the output of intermediate cerebellum.

Output of RNm is biased for influencing distal muscles.  Many studies support a distal bias for RNm.  For example, studies of movement specificity of RNm neurons by Gibson, Houk, and Kohlerman (1985) showed that RNm neurons contribute to controlling coordinated movements of the most distal joints.  They found that some RNm neurons were strongly activated when monkeys twist a shaft.  However, the same studies also noted that many more RNm neurons discharged more strongly during reaching to grasp than during movements that are restricted to single or a few related forelimb joints, suggesting that RNm preferentially contributes to control of coordinated movements of the most distal joints when these occur within the context of reaching.  The results I am presenting here support this hypothesis.

The importance of hand use to the discharge of RNm neurons

The first part of the video shows the behavioral training of a monkey.  The monkey reaches with and without grasping, i.e. on the one hand, he reaches to grasp for frootloops presented in a little beaker (whole-hand task) or a horizontal slot (precision task) and, on the other hand, he reaches while holding a device handle (without preshaping the hand to grasp).

The second part of the video allows comparison of single-unit discharge of a neuron in the magnocellular red nucleus (RNm) recorded during reaches with and without grasping.  The output of the microelectrode amplifier used to record action potentials from the RNm neuron is made audible through a speaker.  The oscilloscope (video insert) shows, from top to bottom, records of 1) grip force, measured with a force transducer in the device handle, 2) contact with the device handle, 3) contact with the froot loop dispenser, and 4) a real-time histogram of the neuron’s firing frequency. 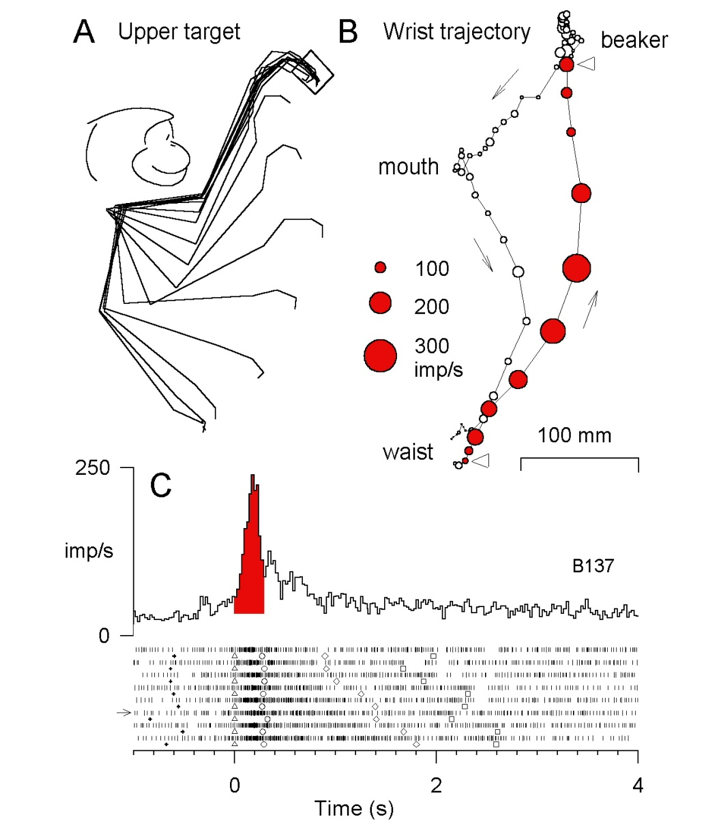 Kinematics and movement-related discharge of a single RNm neuron during reaching to grasp. A: stick figure reconstruction of the monkey’s forelimb during an individual trial of the reach-to-grasp task from the waist to the upper target.  Individual lines connect the shoulder, elbow, wrist, metacarpi-phalangeal (MCP), and interphalangeal joints and are reconstructed from consecutive video frames (30 frames/s).  B: Reconstruction of the wrist trajectory projected on the parasagittal plane through the shoulder.  Circle diameter represents single-unit discharge modulation of the same, simultaneously recorded RNm neuron. Discharge modulation was calculated over consecutive 33.3-ms intervals, each corresponding to the duration of a single video frame.  C: records of average discharge rate and individual trial spike raster displays for the same, single RNm neuron.  The spike rasters illustrate discharge in the trials included in the average. Each row of vertical tick marks in the raster display represents discharge during an individual trial. Each tick marks the occurrence of a single action potential.  The area of red shading below or above the average record indicates the modulation in RNm discharge during the average period of limb transport. RNm discharge during reaching to grasp.  RNm neurons discharge consistently and at high rates during reaching to grasp as is illustrated by the individual trial discharge rasters.  Peak discharge occurs before contacting the beaker as can be seen from the discharge plotted on top of the trajectory of the wrist, and is also obvious from the peak in average relative to the red shading , which indicates the average duration of limb transport.

Our experimental approach was to analyze discharge from individual forelimb RNm neurons recorded while monkeys performed reaching tasks that differed in two aspects: one was reach direction and the other was the extent of hand use required.

We varied hand use in three tasks.  One task elicited reach-to-grasp movements to retrieve a fruit loop from a small beaker in front of the animal.  Discharge of the same neurons was also recorded during two additional tasks that elicited movements that were similar to reaching to grasp in trajectory, amplitude, and direction but did not include a grasp.  One of these, the device task, elicited reaches while holding a handle and the other, the free-reach task, elicited reaches that did not require any specific hand use for task performance.  The video clips provide the opportunity to listen to the discharge of the same neuron during individual trials of different tasks.  Note that discharge rate is also represented visually by histograms at the bottom of the screen. 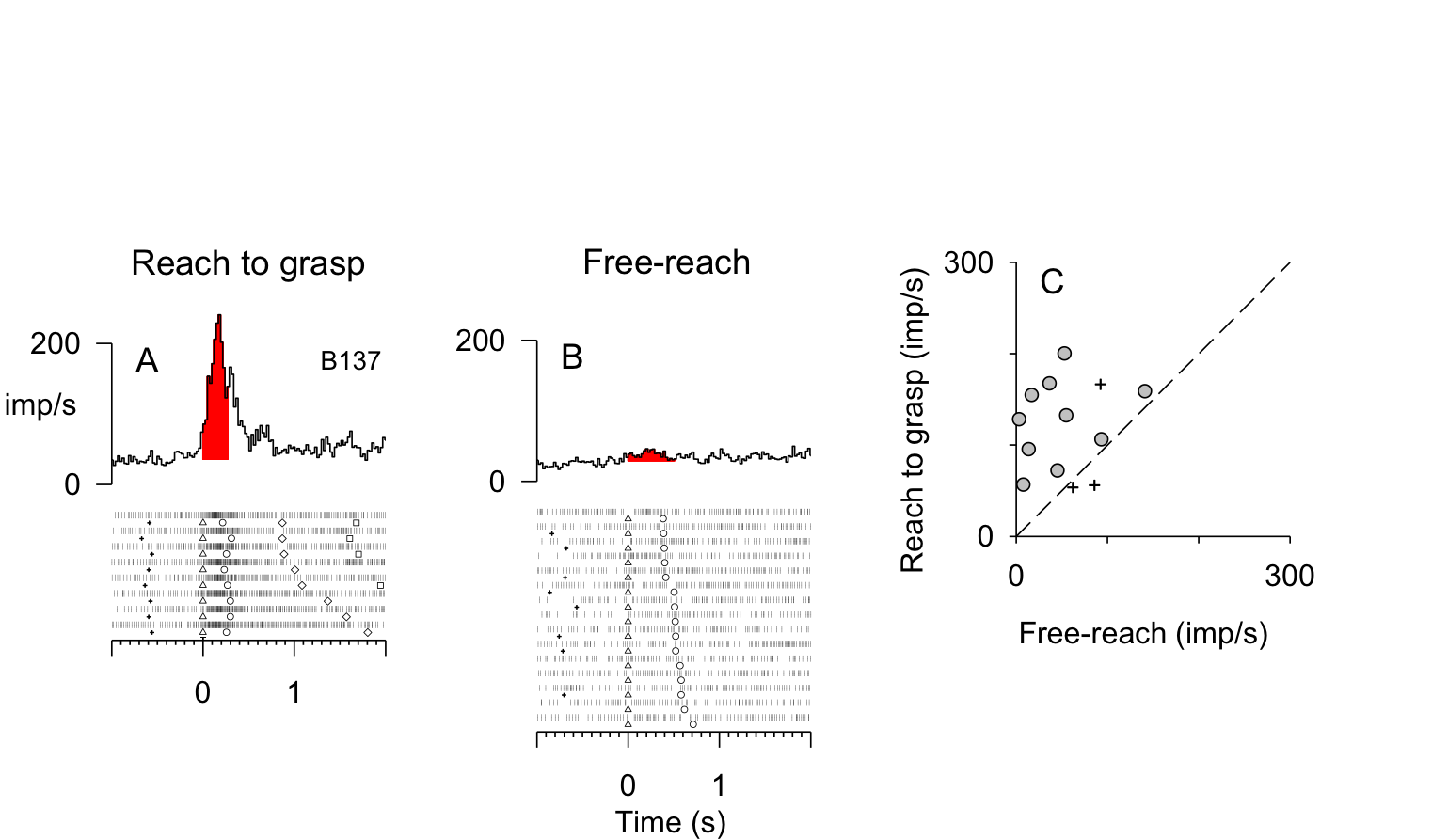 Discharge of RNm neurons during the reach-to-grasp and free-reach tasks.  A–B: records of average discharge rate and individual trial spike raster displays for the same, single RNm neuron.  The spike rasters illustrate discharge in the trials included in the average. Each row of vertical tick marks in the raster display represents discharge during an individual trial. Each tick marks the occurrence of a single action potential.  The areas of red shading below or above the average records indicates the modulation in RNm discharge during the average period of limb transport.  C: Scatter plot comparing mean peak discharge modulation (imp/s) for individual RNm neurons during the free-reach and reach-to-grasp tasks to the upper target.  Each data point represents data from the same neuron.

Our studies on the relative contribution of RNm to distal versus proximal joints have varied hand use while keeping the reach constant.  Because most RNm neurons discharge strongest during reaching to grasp, the aspect of reaching during hand-use is likely to be important.  We further investigated this issue by varying the reach and keeping hand-use constant. 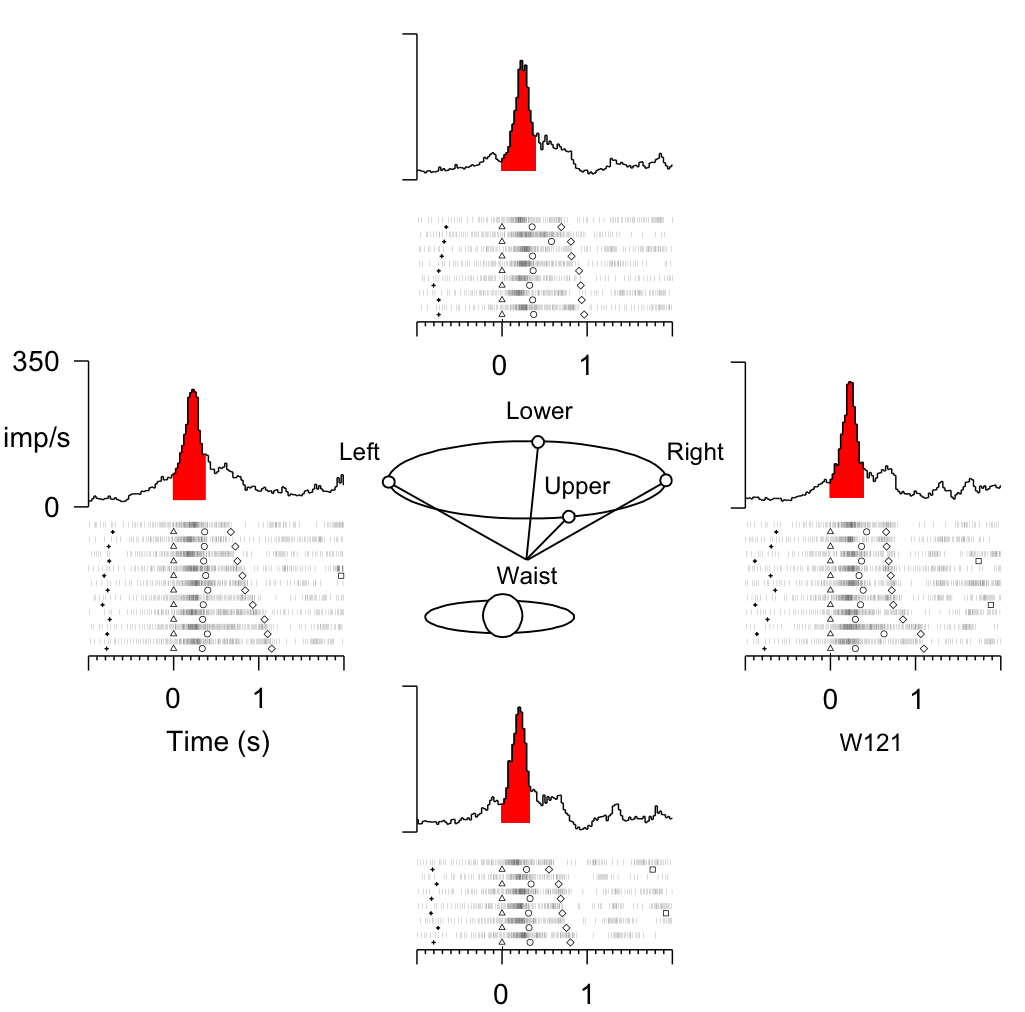 What aspect of hand use is controlled by RNm discharge?

Strong relations between parameters of reach-related RNm discharge and movements were most frequently associated with extension of the metacarpi-phalangeal (MCP) joints.  Typically, a given neuron was strongly related to MCP extension during both the reach-to-grasp and free-reach tasks.  Burst onset latency was strongly correlated with the onset latency of MCP extension and typically burst onset led movement onset.  Burst duration, discharge amplitude, and discharge frequency were strongly correlated with the duration, amplitude, and velocity of MCP extension, respectively.

Relations between parameters of neuronal discharge and movements of the wrist, elbow, and shoulder joints were observed less frequently than relations for MCP extension, and they were typically not consistent across tasks.  For example, some neurons showed relations with elbow extension or wrist flexion during the reach-to-grasp task but the same neurons were not related to elbow extension or wrist flexion during the free-reach task.

How robust are the relations between RNm discharge and MCP extension? Does discharge of RNm neurons contribute to behaviors that are commonly considered to be controlled predominantly by corticospinal pathways?  For example, corticospinal neurons are critical for relatively independent finger movements, such as occur during a precision grasp. 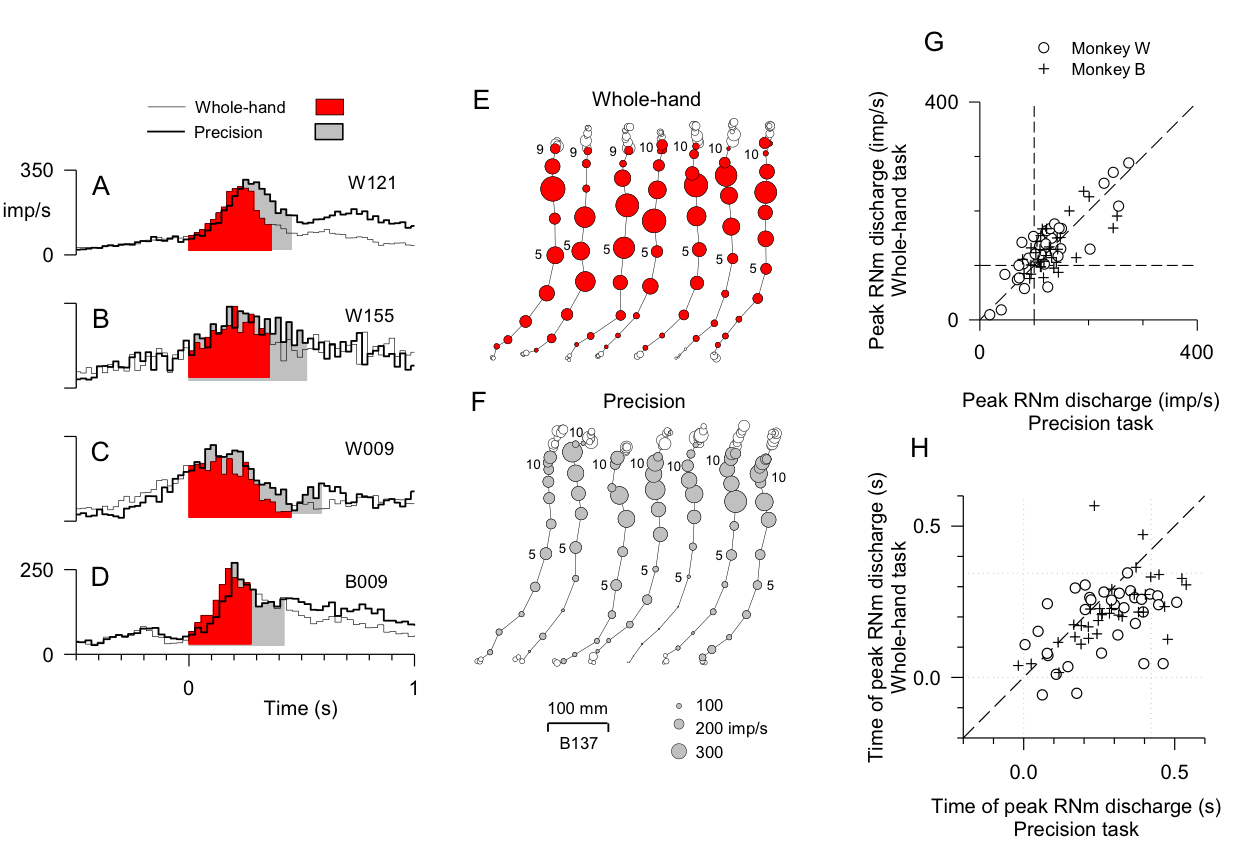