Introduction to the Heart

There are two distinct but linked circuits in the cardiovascular system called the pulmonary and systemic circuits. Pulmonary circulation transports blood to and from the lungs, where it picks up oxygen and delivers carbon dioxide for exhalation. Systemic circulation transports oxygenated blood to virtually all of the tissues of the body and returns relatively deoxygenated blood and carbon dioxide to the heart to be sent back to the pulmonary circulation.

THe Pericardium and the heart wall

Within the mediastinum, the heart is separated from the other mediastinal structures by a tough membrane known as the pericardium, or pericardial sac. The pericardium consists of two distinct sublayers:

The parietal and visceral layers of pericardium are continuous with each other, forming a thin, flat sac. The thin space within this sac is called the pericardial cavity, and it is filled with lubricating serous fluid that cushions and reduces friction on the heart as it beats.

The wall of the heart is composed of three layers of unequal thickness. From superficial to deep, these are the:

Chambers and Circulation through the Heart 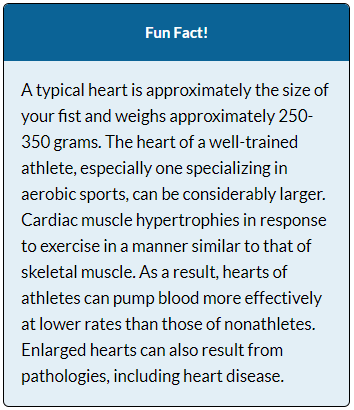 The ventricles serve as the primary pumping chambers of the heart, propelling blood to the lungs or to the rest of the body. Although the ventricles on the right and left sides pump the same amount of blood per contraction, the muscle of the left ventricle is much thicker and better developed than that of the right ventricle. In order to pump blood into the long systemic circuit, the left ventricle must generate a great amount of pressure. The right ventricle does not need to generate as much pressure, since the pulmonary circuit is shorter. The walls of both ventricles are lined with trabeculae carneae, ridges of cardiac muscle covered by endocardium.

The septa are muscular walls located between chambers of the heart.

The right atrium serves as the receiving chamber for blood returning to the heart from the systemic circulation. The two major systemic veins, the superior and inferior venae cavae, and the large coronary vein called the coronary sinus that drains the heart myocardium empty into the right atrium. The superior vena cava drains blood from regions superior to the diaphragm: the head, neck, upper limbs, and the thoracic region. The inferior vena cava travels alongside the descending aorta and drains blood from areas inferior to the diaphragm: the lower limbs and abdominopelvic region of the body. The coronary sinus drains most of the coronary veins that return systemic blood from the heart. The right atrium also has parallel muscular ridges called pectinate muscles.

The right ventricle receives blood from the right atrium through the right atrioventricular, or tricuspid valve. Each flap of the valve is attached to several strong strands of connective tissue, the chordae tendineae. They connect each of the flaps to a papillary muscle that extends from the inferior ventricular surface.

When the myocardium of the ventricle contracts, pressure within the ventricular chamber rises. Blood, like any fluid, flows from higher pressure to lower pressure areas, in this case, toward the pulmonary trunk and the atrium. To prevent any potential backflow, the papillary muscles also contract, generating tension on the chordae tendineae. This prevents the flaps of the valves from being forced into the atria and regurgitation of the blood back into the atria during ventricular contraction.

After exchange of gases in the pulmonary capillaries, blood returns to the left atrium high in oxygen via one of the four pulmonary veins. When the left atrium contracts, blood is pumped into the ventricle, though some blood naturally enters the left ventricle as it relaxes, without the push from the left atrium.

The left atrioventricular, or bicuspid, or mitral valve, is connected to papillary muscles via chordae tendineae. Recall that, although both sides of the heart will pump the same amount of blood, the muscular layer is much thicker in the left ventricle compared to the right.

The left ventricle is the major pumping chamber for the systemic circuit; it ejects blood into the aorta through the aortic semilunar valve.

The valves are specialized structures that ensure unidirectional blood flow through the heart. Between the right atrium and the right ventricle is the right atrioventricular valve, or tricuspid valve. It typically consists of three flaps, or leaflets, made of endocardium reinforced with additional connective tissue. The flaps are connected by chordae tendineae to the papillary muscles, which control the opening and closing of the valves.

At the base of the aorta is the aortic semilunar valve, which prevents backflow from the aorta. It normally is composed of three flaps. When the ventricle relaxes and blood attempts to flow back into the ventricle from the aorta, blood will fill the cusps of the valve, causing it to close. 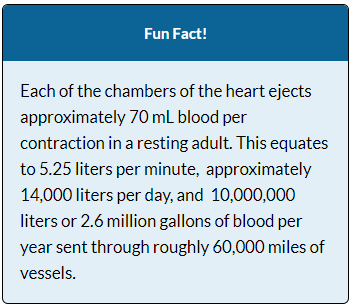 Both the atria and ventricles undergo systole and diastole, and these components are carefully coordinated to ensure blood is pumped efficiently to the body.

A Review of Blood Flow Through the Heart

The human heart is the first functional organ to develop. It begins beating around day 21 or 22. This emphasizes the critical nature of the heart in distributing blood with vital nutrients and oxygen and removing wastes throughout the developing baby.

The heart begins as two separate tubes. The tubes fuse to form a single primitive heart tube. As the primitive heart tube elongates, it begins to fold, eventually forming an S shape, which places the chambers and major vessels into an alignment similar to the adult heart.

During prenatal development, the fetus receives oxygen and nutrients from the placenta. As a result, the fetal cardiovascular system includes circulatory shortcuts, or shunts, that allow blood flow to bypass immature organs such as the lungs and liver until childbirth.

A second shunt, the ductus arteriosus, connects and diverts blood directly from the pulmonary artery to the aorta. This ensures that only a small volume of oxygenated blood passes through the immature pulmonary circuit.

As the newborn takes its first breath, inflation of the lungs decreases blood pressure in the pulmonary circuit. This causes blood flow through the foramen ovale to reverse, and two flaps of tissue move over this opening, blocking it. This occurs soon after birth, and the tissue usually fuses over the following months, turning the foramen ovale into the fossa ovalis. The ductus arteriosus constricts, flattens, and becomes the ligamentum arteriosum. Closing of the foramen ovale and ductus arteriosus establishes the adult pattern of circulation through the heart and ensures blood travels to the lungs for oxygenation.

Cardiomyocytes require a reliable supply of oxygen and nutrients, and a way to remove wastes, so it needs a dedicated, complex, and extensive coronary circulation. Coronary arteries supply blood to the myocardium and other components of the heart.

The first portion of the aorta after it arises from the left ventricle gives rise to the coronary arteries.

The Conduction System and Autonomic Innervation of the Heart 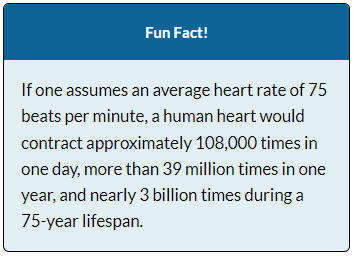 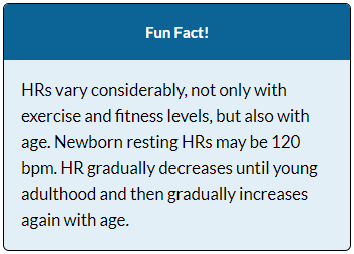 The SA node, without nervous or endocrine control, would initiate a heart impulse approximately 80–100 times per minute. Autonomic control over heart rate is initiated in cardiovascular centers of the medulla oblongata of the midbrain and travels through sympathetic and parasympathetic pathways to get to the heart.

The two divisions have opposing functions:

Systemic Circulation: Great Vessels and Major Branches of the Aorta

The aorta is the largest artery in the body. It arises from the left ventricle. After exiting the heart, the ascending aorta moves in a superior direction for approximately 5 cm. Then it reverses direction, forming an arc to the left, called the aortic arch. The aortic arch runs inferiorly a short distance and then becomes the descending aorta. It travels just anterior and to the left of the to the vertebral bodies and passes through an opening in the diaphragm. Superior to the diaphragm, it is called the thoracic aorta, and inferior to the diaphragm, it is called the abdominal aorta. The abdominal aorta terminates when it bifurcates into the two common iliac arteries at the level of the fourth lumbar vertebra. The common iliac arteries split into external and internal iliac arteries and provide blood to the pelvic region and ultimately to the lower limbs.

There are several branches off of the various regions of the aorta that we want you to know for this course: