This content is covered in the assignment and reviewed and built upon in lecture.

Muscle is one of the four primary tissue types of the body. All types of muscle tissues function to produce some form of movement. This includes movements of our bones, joints, and skin (muscles of facial expression); movement of our heart as it contracts; movements in our internal structures, such as our digestive tract, blood vessels, and iris of our eye; and movements that open and close body passageways.

All muscle cells, or myocytes, share the following characteristics:

This information is covered in the assignment and built upon in lecture.

Skeletal muscle completely depends on innervation from the nervous system to contract. Cardiac muscle and smooth muscle can respond to electrical stimuli from the nervous system as well as hormones and local stimuli. In certain locations, such as the walls of visceral organs, stretching the muscle can trigger smooth muscle contraction. Because most smooth muscles must function for long periods without rest, their power output is relatively low, but contractions can continue without using large amounts of energy.

Compare and contrast the features of the different types of muscle tissues:

Approximately forty percent of your body mass is made up of skeletal muscle.

Skeletal muscle produces movement through voluntary contraction, such as movement of our limbs, trunk, external sphincters, and muscles of facial expression. In addition to producing movement, skeletal muscle has a few other key functions:

These three connective tissue layers merge, and the collagen fibers intertwine and become aligned together to form the tendon, which is composed of dense regular connective tissue. Collagen fibers of the tendon penetrate deep into the periosteum and cortical bone of the bone it is attached to in order to anchor the tendon to the bone.
Each muscle fiber contains many myofibrils, and each myofibril runs the entire length of the muscle fiber. Myofibrils contain many myofilaments, which are actin and myosin proteins. The actin and myosin are organized into repetitive groupings, and each unique grouping is called a sarcomere. The sarcomere is the functional unit of the muscle fiber. The actin and myosin in a sarcomere overlap and move along each other as the muscle contracts, shortening the sarcomere. As sarcomeres shorten, the myofibril, muscle fiber, and the overall muscle all shorten. The striated appearance of skeletal muscle fibers is due to the arrangement of the myofilaments in sequential order from one end of the muscle fiber to the other.
This is as far as we will go into the anatomy of a muscle fiber and muscle contraction. That content is covered in-depth in physiology courses.

The size of a motor unit is variable depending on the nature of the muscle.

When a motor neuron is stimulated, all muscle fibers in its motor unit will contract. This is the all-or-none principle. The number of and specific motor units in a muscle recruited to contract at a given time will vary depending on the motion and strength required to complete an action. As more motor units are recruited and contract, the muscle contraction grows progressively stronger. When necessary, the maximal number of motor units in a muscle can be recruited simultaneously, producing the maximum force of contraction for that muscle, but this cannot last for very long because of the energy requirements to sustain the contraction. To prevent complete muscle fatigue, motor units are generally not all simultaneously active, but instead some motor units rest while others are active, which allows for longer and more efficient muscle contractions.

There are three main types of muscle fibers, as classified by the speed of their contractions and the fuel they use to produce energy.

Most skeletal muscles contain a mixture of all three types. The predominant fiber type in a muscle is determined by the primary function of the muscle. The proportion of slow muscle fibers in muscle determines the suitability of that muscle for endurance activities. Resistance exercises require large amounts of fast glycolytic fibers to produce short, powerful movements that are not repeated over long periods of time. Muscles used for power movements have a higher ratio of fast glycolytic fibers to slow oxidative fibers. 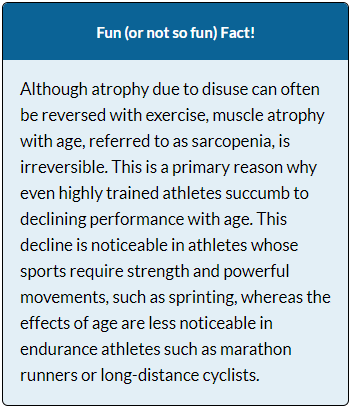 Physical exercise alters the appearance of skeletal muscles and can produce changes in muscle performance. Endurance training modifies several features of slow oxidative fibers to make them even more efficient. Resistance exercise leads to an increased number of myofibrils in the muscle fibers. This results in an increased size of the muscle cells, or hypertrophy, and ultimately an increased size of the muscle. However, exercise does NOT result in the formation of new muscle fibers. Conversely, a lack of use can result in a decrease in muscle mass, called atrophy.

In both the CNS and PNS two main classes of cells make up nervous tissue: neurons and neuroglia. Neurons process and communicate information throughout the body. Glial cells, or neuroglia, play an essential role in supporting neurons.

Neurons, or nerve cells, transmit information through the body via electrochemical signals. There are many neurons in the nervous system—a number in the trillions. The synapse is the gap between two neurons, or between a neuron and its target, a muscle or a gland, across which the impulse is transmitted by chemical compounds known as neurotransmitters.

The structure of neurons is well-suited to their function as conducting cells, with three main parts:

Information flows through a neuron from the dendrites, across the cell body, and down the axon. This gives the neuron a polarity—meaning that information flows in this one direction.

Neurons can be categorized by shape:

The word “glia” comes from the Greek word for glue & was coined by German pathologist Rudolph Virchow, who wrote in 1856: “This connective substance… is a kind of glue (neuroglia) in which the nervous elements are planted.”

Glial cells, or neuroglia, are cells that support neurons. Many glial functions are directed at helping neurons complete their function of communication. There are six different glial cells, with four found in the CNS and two found in the PNS.

Myelin is a lipid-rich sheath that surrounds the axon and creates a myelin sheath that facilitates the transmission of electrical signals along the axon. Myelin acts as insulation much like the plastic or rubber that is used to insulate electrical wires. There are gaps in the myelin covering of an axon. Each gap is called a node of Ranvier and assists with the speed of conduction along an axon.

Myelination occurs when all or a portion of a glial cell wraps around the axon many times with little or no cytoplasm between the layers. For oligodendrocytes in the CNS, the rest of the cell is separate from the process that forms a myelin sheath around a given axon segment. For Schwann cells in the PNS, the entire cell wraps itself around the axon.

The process of myelination occurs throughout development, even into one’s 20s or 30s in some brain pathways. Some myelin sheaths are relatively thin, while others can be very thick, many times thicker than the diameter of the axon it is myelinating. The thicker the myelin, the faster the signal travels along the axon.

Collections of neuronal cell bodies or axons have names that differ depending on whether the structure is in the CNS or PNS.

Functional Classifications in the Nervous System

The nervous system is involved in receiving information about the environment around us (sensation) and generating responses to that information (motor responses). Sensory information travels from the periphery to the CNS via a sensory neuron. We sometimes call fibers that carry sensory information afferent fibers. That information is then integrated and processed in order to decide how to respond to that information. That integration can happen in the spinal cord, as with reflexes, for example. Most often that integration happens in the brain and involves tying together past experiences with a variety of sensory information to decide on a response. Ultimately the response occurs as motor output via a motor neuron that originates in the CNS and travels to either a muscle or gland. We sometimes call fibers that carry outgoing motor information efferent fibers.

The non-special modalities are termed “general” modalities. The four general modalities are categorized in two ways. One categorization is by whether the nerve fibers are carrying sensory or motor information. The other is based on whether or not the nerve fibers are carrying somatic or visceral information. The somatic nervous system is responsible for our conscious perception of the environment and for our voluntary responses to that perception by means of skeletal muscles. Visceral information involves unconscious sensory and motor activity. Visceral motor activity is part of the autonomic nervous system, which will be covered in Unit 2.

As a result, we can categorize general nervous system fibers based on four general functional modalities: