This will be covered in the lecture videos.

To promote clear communication, such as about the location of a patient’s abdominal pain or a suspicious mass, health care providers divide up the cavity into either nine regions or four quadrants. You should know the names of the regions and quadrants as labeled in the image below. For the nine-region system, we will ask you about the name and the location of the regions, but we won’t ask you which organs are located specifically in which regions. For the quadrant system, we will ask you about the quadrant that an organ is primarily located in.

The more detailed regional approach subdivides the cavity with one horizontal line immediately inferior to the ribs and one immediately superior to the pelvis, and two vertical lines drawn as if dropped from the midpoint of each clavicle (collarbone). There are nine resulting regions. The simpler quadrants approach, which is more commonly used in medicine, subdivides the cavity with one horizontal and one vertical line that intersect at the patient’s umbilicus (navel).

The Peritoneum and Mesentery

This content is primarily covered in the reading and assignment as self-study. It will be only briefly reviewed in the videos.

The digestive organs within the abdominopelvic cavity are held in place by the peritoneum, a broad membranous sac made up of simple squamous epithelial tissue surrounded by connective tissue. The peritoneum is similar to the pleura surrounding the lungs and the pericardium surrounding the heart. The parietal peritoneum is the outer layer that primarily lines the wall of the abdominopelvic cavities. The visceral peritoneum is the inner layer that lines most organs abdominopelvic cavity. The visceral and parietal peritoneum are continuous with each other, and they enclose the peritoneal cavity. The organs are surrounded by, but not within, the peritoneal cavity. The peritoneal cavity contains few milliliters of watery fluid and acts as a lubricant to reduce friction between the abdominal and pelvic organs and the body wall that could lead to inflammation of the organs. The visceral peritoneum includes multiple large folds that envelope various abdominal organs, holding them to the dorsal surface of the body wall. Within these folds are blood vessels, lymphatic vessels, and nerves that innervate the organs with which they are in contact, supplying their adjacent organs. The five major peritoneal folds are described in the table below.

Not all organs are surrounded by peritoneum, and that has to do with how they develop. There are three categories of organs based on their relationship to the peritoneum:

Introduction to the digestive system

This content is primarily covered in the reading and assignment as self-study. It will be only briefly reviewed in the videos.

The digestive system consists of organs spanning the head and neck to the pelvic cavity. Food passes through some of these organs, where it is broken down, digested, and absorbed, then wastes are compacted and excreted. These organs are part of the alimentary canal, or digestive tract. Other organs assist with digestion by mechanically breaking down food or secreting chemicals that break down food through chemical digestion. The organs of the digestive system are listed here, though we will only talk about the organs located in the thorax, abdomen, and pelvis in this unit. Organs located in the head and neck will be covered in Unit 3.

Histology of the Alimentary Canal

This content is primarily covered in the reading and assignment as self-study.

Throughout its length, the alimentary tract is composed of the same four tissue layers.

The walls of the alimentary canal contain a variety of sensors that help regulate digestive functions. Much of the alimentary canal receives local innervation from the enteric nervous system, which runs from the esophagus to the anus, and contains approximately 100 million motor, sensory, and interneurons. The myenteric plexus (plexus of Auerbach) lies in the muscularis layer of the alimentary canal, between the inner longitudinal and outer circular layers, and it is responsible for motility, especially the rhythm and force of the contractions of the muscularis. As food enters the different portions of the digestive tract, neurons of the enteric nervous system sense the presence of food and stretch in the walls of the organ. As a result, the myenteric plexus is stimulated, causing contraction in the muscularis layer.

Both the sympathetic and parasympathetic divisions of the autonomic nervous system also influence the digestive system organs. We will discuss specific autonomic innervation of these organs later in this module. In general, sympathetic activation (the fight-or-flight response) restricts the activity of enteric neurons, thereby decreasing GI secretion and motility. In contrast, parasympathetic activation (the rest-and-digest response) increases GI secretion and motility by stimulating neurons of the enteric nervous system.

Functions of the Digestive System

This content is primarily covered in the reading and assignment as self-study.

The digestive system has several functions:

Segmentation is different than peristalsis, though it does involve localized contractions of circular muscle of the muscularis layer of the alimentary canal. Instead of propelling food substances forward, segmentation is a form of mechanical digestion. These contractions isolate small sections of the intestine, moving their contents back and forth while continuously subdividing, breaking up, and mixing the contents. By moving food back and forth in the intestinal lumen, segmentation mixes food with digestive juices and facilitates absorption.

The following table provides an overview of the specific functions of the organs of the alimentary canal. These organs will be covered in the following sections.

The esophagus is a muscular tube that connects the pharynx to the stomach. It is approximately 25.4 cm (10 in) in length, located posterior to the trachea, and remains in a collapsed form when not engaged in swallowing. It runs a mainly straight route through the mediastinum of the thorax. To enter the abdomen, the esophagus penetrates the diaphragm through an opening called the esophageal hiatus.

The esophagus is liked by non-keratinized, stratified squamous epithelium. This epithelium protects against erosion from food particles. The muscularis layer changes according to location: In the upper third of the esophagus, the muscularis is skeletal muscle. In the middle third, it is both skeletal and smooth muscle. In the lower third, it is smooth muscle. The esophageal walls also contain glands that function to protect it. Esophageal glands proper are most concentrated in the superior portion of the esophagus. They secrete mucous to lubricate the esophagus to help food move easily towards the stomach. Esophageal cardiac glands, located in the inferior portion of the esophagus, secrete a basic substance to help counter against acidic contents that may reflux into the lower esophagus from the stomach. 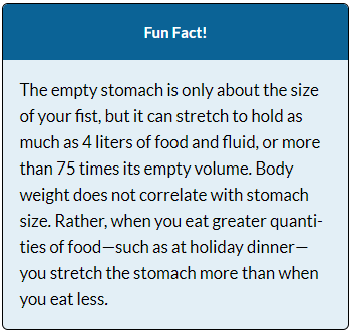 The stomach is an expansion of the alimentary canal that lies immediately inferior to the esophagus. It links the esophagus to the first part of the small intestine (the duodenum). In addition to its chemical and mechanical digestion functions, the stomach serves as a temporary holding chamber, keeping food and allowing only small amounts into the small intestine at a time. The bolus of food is mixed together with digestive juices in the stomach until together they form chyme, which is released into the small intestine. Little absorption occurs in the stomach, with the exception of the negligible amount of alcohol and certain medications. The contents of the stomach are completely emptied into the duodenum within 2 to 4 hours after you eat a meal. However, note that this is still a fraction of the 24 to 72 hours that full digestion typically takes from start to finish.

There are four main regions in the stomach:

The lateral surface of the stomach is called the greater curvature, while the medial border is the lesser curvature. The inner walls contain folds called rugae (gastric folds).

Epithelium and Cells of the Stomach

The stomach is lined by simple columnar epithelium. A vast number of gastric pits dot the surface of the epithelium and mark the entry to each gastric gland, which secretes a complex digestive fluid referred to as gastric juice.

There are five types of cells in the stomach epithelium, including the cells lining the lumen and the cells of the gastric pits: 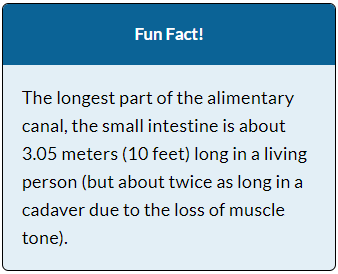 Chyme released from the stomach enters the small intestine, which is smaller in diameter than the large intestine.

The small intestine is subdivided into three regions.

The movement of intestinal smooth muscles includes both segmentation and peristalsis. If you could see into the small intestine when it was going through segmentation, it would look as if the contents were being shoved incrementally back and forth, as the rings of smooth muscle repeatedly contract and then relax. Segmentation in the small intestine does not force chyme through the tract. Instead, it combines the chyme with digestive juices and pushes food particles against the mucosa to be absorbed. When most of the chyme has been absorbed, the small intestinal wall becomes less distended. At this point, the localized segmentation process is replaced by peristaltic movements.

The digestion of proteins and carbohydrates, which partially occurs in the stomach, is completed in the small intestine with the aid of intestinal and pancreatic juices. Lipids arrive in the intestine largely undigested, so much of the focus here is on lipid digestion, which is facilitated by bile and the enzyme pancreatic lipase.

The lamina propria of the small intestine mucosa contains mucosa-associated lymphatic tissue (MALT), typically referred to as Peyer’s patches in certain regions. They serve to keep bacteria from entering the bloodstream.

Three features are unique to the large intestine

The large intestine absorbs most of the remaining water to convert the liquid chyme residue into semisolid feces (“stool”). Feces are eliminated through contractions of the rectal muscles.

If defecation is delayed for an extended time, additional water is absorbed, making the feces firmer and potentially leading to constipation. On the other hand, if the waste matter moves too quickly through the intestines, not enough water is absorbed, and diarrhea can result.