Gross Anatomy of the Spinal Cord

This information is covered in the assignment and reviewed and built upon in the lecture videos.

Regions of the Spinal Cord

The length of the spinal cord is divided into regions that correspond to the regions of the vertebral column. Superiorly, immediately adjacent to the brain stem is the cervical region, followed by the thoracic, then the lumbar, and finally the sacral region.

There are two portions of the spinal cord that have a larger diameter in order to house more cell bodies for more neurons that will go out to innervate specific parts of the body. The cervical enlargement houses neurons that will innervate the muscles of the upper extremities, while the lumbar enlargement will innervate the muscles of the lower extremity. The cervical enlargement is particularly large because there is greater control over the fine musculature of the upper limbs, particularly of the fingers. The lumbar enlargement is not as significant in appearance because there is less fine motor control of the lower limbs.

Internal Anatomy of the Spinal Cord

In the CNS, regions with many cell bodies and dendrites are referred to as gray matter, while regions composed primarily of myelinated axons are called white matter. White matter is white because axons are insulated by myelin, which is a lipid-rich (fatty) substance. Though it isn’t actually gray, gray matter may have that color ascribed to it because, next to the white matter, it is just darker.  Gray matter and white matter can be seen with the unaided eye in the CNS.

In cross-section, the gray matter of the spinal cord has a shape somewhat similar to a capital “H.” The gray matter is subdivided into regions that are referred to as horns. The dorsal or posterior horn is responsible for sensory processing. The ventral or anterior horn sends out motor signals to the skeletal muscles. Note that it is common to see the terms dorsal (dorsal = “back”) and ventral (ventral = “belly”) used interchangeably with posterior and anterior, particularly in reference to nerves and the structures of the spinal cord. You should be comfortable using both terms interchangeably. The lateral horn, which is only found in the thoracic region (and less prominent in the very upper lumbar region), is the central component of the sympathetic division of the autonomic nervous system (covered in unit 2).

There are 31 spinal nerves, named for the level of the spinal cord at which each one emerges.

The spinal nerves are numbered from the superior to inferior positions, and each emerges from the vertebral column through the intervertebral foramen at its level. The first nerve, C1, emerges between the first cervical vertebra and the occipital bone. C2 through C7 emerge superior to the vertebrae of the same number, but C8 emerges between the seventh cervical vertebra and the first thoracic vertebra. For the thoracic and lumbar nerves, each one emerges inferior to the vertebra of the same number. The sacral nerves emerge from the sacral foramina along the length of that unique vertebra.

This information will be covered in the lecture videos.

In this section you will learn about the pathways that carry information through the spinal cord, either in from the periphery to the brain, or from the brain out to the periphery. We will only discuss these pathways through the spinal cord, meaning that we will not follow them all the way to or from their structures in the brain. That information can be found on additional pathway slides posted on canvas in gray text, but you will not be asked about it in this unit. You will learn about the structures of the brainstem, cerebellum, and cerebrum in Unit 3. Sensory and motor information going to or from the head and neck follow different pathways, and we will discuss those more in Unit 3.

A sensory pathway that carries peripheral sensations to the brain is referred to as an ascending pathway. Different types of somatic sensory information each follow specific pathways through the CNS.

The dorsal column-medial lemniscus (DCML) pathway carries information about fine, discriminative touch and light pressure. It begins with the sensory axon carrying information from receptors in the periphery through the spinal nerve and dorsal root. The first order neuron in this pathway has a cell body in the dorsal root ganglion. The axons of the first order neuron enter the dorsal column of white matter in the spinal cord. (The dorsal column is separated into two component tracts, the fasciculus gracilis that contains axons from the legs and lower body, and the fasciculus cuneatus that contains axons from the upper body and arms. However, we will not ask you about this on the exam.)

The axons of the first order neuron in the dorsal column ascend all they way to the brainstem before synapsing there, making these very long neurons.  The second order neuron then decussates, or crosses the midline in the brainstem and ascend to other brain structures. (They synapse with the third order neuron in the thalamus before reaching their destination in the primary somatosensory cortex of the parietal lobe. This is simply finishing the pathway for you, but you will not be asked about this on the exam.)

Like the DCML, the anterolateral system begins with neurons that travel through the spinal nerve and dorsal root, with a cell body in the dorsal root ganglion. These neurons extend their axons to the dorsal horn, where they synapse with the second neuron in their respective pathway. Axons from these second neurons then decussate within the spinal cord at (or near) the level that they enter. From there they ascend to the brain. (Like the DCML pathway, the second order neuron synapses in the thalamus, and the third order neuron then projects to one of two areas in the cerebral cortex. You will not be asked about that on the exam.)

The spinocerebellar pathway senses proprioceptive information. It is divided into dorsal and ventral portions, with the dorsal carrying information about the action of individual muscles and the ventral portion carrying information about the position of the limb as a whole. The first order neuron begins like the other sensory pathways, with an axon entering the spinal nerve, then the dorsal root, with a cell body in the dorsal root ganglion. It then enters the posterior horn and synapses there. From there, all we want you to know is that a portion of this pathway stays ipsilateral for its entire path, while the other portion of the pathway decussates at the level it enters the spinal cord and then crosses back over to the side it originated from in the brainstem. As a result all information that travels in the spinocerebellar pathway is ultimately processed in the ipsilateral cerebellum, the target for this pathway. 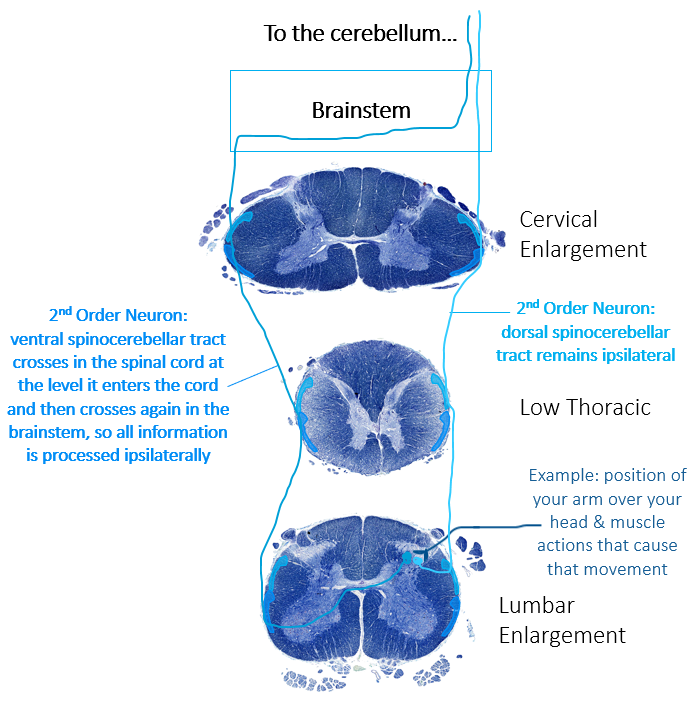 The motor output from the cortex descends into the brain stem and to the spinal cord to control the voluntary movements through motor neurons. In the descending pathways we have an upper motor neuron and a lower motor neuron.

Axons of the corticospinal tract are largely contralateral, meaning that they cross the midline of the brain stem or spinal cord and synapse on the opposite side of the body. Therefore, the right motor cortex of the cerebrum controls muscles on the left side of the body, and vice versa.

The corticospinal tract descends from the cortex through the deep white matter of the brain. It then passes through the brainstem where the vast majority of fibers decussate. (We will only focus on the decussating fibers in this class.)

The motor neuron that causes contraction of the big toe, for example, is located in the sacral spinal cord. The axon that has to reach all the way to the belly of that muscle may be a meter in length. The neuronal cell body that maintains that long fiber must be quite large, possibly several hundred micrometers in diameter, making it one of the largest cells in the body.

This section will provide a brief introduction to reflexes, as this content is covered thoroughly in the slides and lecture video.

Simple somatic reflexes do not include the higher centers discussed for conscious or voluntary aspects of movement. However, we do become consciously aware that a reflex occurred, even though we don’t need our higher centers to cause the reflex.

Reflexes involve a receptor in the periphery, a sensory neuron that carries the information to the spinal cord, integration in the spinal cord (which sometimes involves an interneuron), a motor neuron to carry the response to the effector (a muscle for somatic reflexes), and the effector itself. Reflexes can be monosynaptic, meaning just one synapse in the pathway, or polysynaptic, meaning more than one synapse in the pathway.

We will discuss a few different types of reflexes: