***All content in this module will be reviewed and built upon in the lecture videos, but not all content will be repeated.

Chemical digestion in the small intestine relies on the activities of three accessory digestive organs: the liver, pancreas, and gallbladder. The digestive role of the liver is to produce bile and export it to the duodenum. The gallbladder primarily stores, concentrates, and releases bile. The pancreas produces pancreatic juice, which contains digestive enzymes and bicarbonate ions, and delivers it to the duodenum.

The liver is the largest gland in the body, weighing about three pounds in an adult. It is also one of the most important organs. In addition to being an accessory digestive organ, it plays a number of roles in metabolism and regulation. The liver is a complex biochemical processing plant. It packages nutrients absorbed by the digestive system; produces plasma proteins, clotting factors, and bile; and disposes of worn-out cell components and waste products. We will primarily focus on the digestive functions in this module.

The liver lies inferior to the diaphragm in the right upper quadrant of the abdominal cavity and receives protection from the surrounding ribs. It is divided into four lobes: a large right lobe, a smaller left lobe, a small inferior quadrate lobe, and a small posterior caudate lobe. 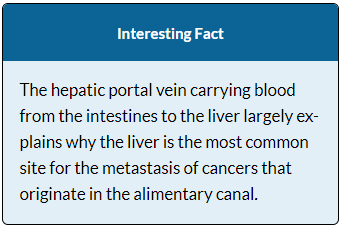 The porta hepatis is where the hepatic artery proper, hepatic portal vein, and common hepatic duct enter the liver.

Instead of entering the circulation directly, absorbed nutrients and certain wastes (for example, materials produced by the spleen) travel to the liver for processing. They do so via the hepatic portal system. Portal systems begin and end in capillaries. In this case, the initial capillaries from the stomach, small intestine, large intestine, and spleen lead to the hepatic portal vein and end in specialized capillaries within the liver.

The hepatocyte is the liver’s main cell type. These cells play a role in a wide variety of secretory, metabolic, and endocrine functions. Hepatocytes process the nutrients, toxins, and waste materials carried by the blood. They also secrete about one liter of bile each day. Before lipids can be digested in the watery environment of the small intestine, large lipid globules must be broken down into smaller lipid globules. Bile is a mixture secreted by the liver to accomplish this task in the small intestine, so it plays an important role in lipid digestion.

Hepatocytes work non-stop, but bile production increases when fatty chyme enters the duodenum and stimulates the secretion of the gut hormone secretin. Between meals, bile is produced but conserved in the gall bladder. Small ducts accumulate the bile produced by hepatocytes. From here, bile flows first into bile ductules and then into bile ducts. The bile ducts unite to form the larger right and left hepatic ducts, which themselves merge and exit the liver as the common hepatic duct. This duct then joins with the cystic duct from the gallbladder, forming the common bile duct through which bile flows into the small intestine.

The soft, oblong, glandular pancreas is a secondarily retroperitoneal organ located posterior to the stomach in the upper left quadrant. Its head is nestled into the “c-shaped” curvature of the duodenum with the body extending to the left and ending as a tapering tail near the spleen. It has both exocrine (secreting digestive enzymes) and endocrine (releasing hormones into the blood) functions.

The exocrine part of the pancreas secretes enzyme-rich pancreatic juices through the pancreatic duct into the small intestine.  It is composed mostly of water along with some salts, sodium bicarbonate, and several digestive enzymes. Sodium bicarbonate serves to buffer the acidic gastric juice in chyme, inactivate pepsin from the stomach, and create an optimal environment for the activity of pH-sensitive digestive enzymes in the small intestine. Pancreatic enzymes are active in the digestion of sugars, proteins, and fats.

The gallbladder is on the posterior, inferior aspect of the right lobe of the liver. This muscular sac stores, concentrates, and, when stimulated, propels the bile into the duodenum via the common bile duct.

The simple columnar epithelium of the gallbladder mucosa is organized in rugae, similar to those of the stomach. The wall’s middle, muscular coat is made of smooth muscle fibers. When these fibers contract, the gallbladder’s contents are ejected through the cystic duct and into the bile duct. The gallbladder’s mucosa concentrates bile by absorbing water and ions from it.

The biliary tree will be covered in the lecture videos.