The shaft of the tibia is triangular in shape. Both the anterior tibial border and the medial side of the triangular shaft are located immediately under the skin and can be easily palpated along the entire length of the tibia. The interosseous membrane of the leg is the sheet of dense connective tissue that holds the tibia and fibula bones together.

Bones and Joints of the foot

The posterior half of the foot is formed by seven tarsal bones. The most superior bone is the talus. This has a relatively square-shaped, upper surface that articulates with the tibia and fibula to form the ankle joint. Inferiorly, the talus articulates with the calcaneus, the largest bone of the foot, which forms the heel. Body weight is transferred from the tibia to the talus to the calcaneus, which rests on the ground.

The cuboid articulates with the anterior end of the calcaneus bone. The talus articulates anteriorly with the navicular, which in turn articulates anteriorly with the three cuneiform (“wedge-shaped”) bones. These bones are the medial cuneiform, the intermediate cuneiform, and the lateral cuneiform. Each of these bones has a broad superior surface and a narrow inferior surface, which together produce the transverse (medial-lateral) curvature of the foot. The navicular and lateral cuneiform also articulate with the medial side of the cuboid bone. The joints between the tarsal bones are called the intertarsal joint.

Arches of the Foot

During running, the force applied to each foot as it contacts the ground can be up to 2.5 times your body weight.

This content will be covered in a lecture video.

When the foot comes into contact with the ground during walking, running, or jumping , the impact of the body weight puts a tremendous amount of pressure and force on the foot. The bones, joints, ligaments, and muscles of the foot absorb this force, thus greatly reducing the amount of shock that is passed superiorly into the lower limb and body. The arches of the foot play an important role in this shock-absorbing ability. When weight is applied to the foot, these arches will flatten somewhat, thus absorbing energy. When the weight is removed, the elastic ligaments maintaining the arches recoil, releasing the stored energy and improving the energy efficiency of walking. Contraction of the foot muscles also plays an important role in this energy absorption. The arches also serve to distribute body weight side to side and to either end of the foot.

The principal support for the longitudinal arches of the foot is a deep fascia called plantar aponeurosis, which runs from the calcaneus bone to the toes. The plantar fascia is superficial to the intrinsic muscles of the foot.

The ankle is formed by the talocrural joint. It consists of the articulations between the talus bone of the foot and the distal ends of the tibia and fibula of the leg (crural = “leg”). The superior aspect of the talus bone is square-shaped and has three areas of articulation. The top of the talus articulates with the inferior tibia. This is the portion of the ankle joint that carries the body weight between the leg and foot. The sides of the talus are firmly held in position by the articulations with the medial malleolus of the tibia and the lateral malleolus of the fibula, which prevent any side-to-side motion of the talus. The ankle is thus a uniaxial hinge joint that allows only for dorsiflexion and plantar flexion of the foot.

Additional joints between the tarsal bones of the posterior foot allow for the movements of foot inversion and eversion. These motions do not happen at the ankle, but at intertarsal joints of the foot.

The talocrural joint of the ankle is supported by several strong ligaments located on the sides of the joint. On the medial side is the broad deltoid ligament. The deltoid ligament supports the ankle joint and also resists excessive eversion of the foot. The lateral side of the ankle has several smaller ligaments. These include the anterior talofibular ligament and the posterior talofibular ligament, both of which span between the talus bone and the lateral malleolus of the fibula, and the calcaneofibular ligament, located between the calcaneus bone and fibula. These ligaments support the ankle and also resist excess inversion of the foot. The anterior and posterior tibiofibular ligaments hold the distal portions of the tibia and fibula together to support the talocrural joint.

Muscles of the Leg

This content will be covered in the assignment and reviewed in a lecture video.

The muscles of the leg are divided into four compartments by thick fascia.

The muscles in the anterior compartment of the leg are the the tibialis anterior, a long and thick muscle on the lateral surface of the tibia, the extensor hallucis longus, deep under it, and the extensor digitorum longus, lateral to it. They all contribute to dorsiflexion. The fibularis tertius, a small muscle that originates on the anterior surface of the fibula, is associated with the extensor digitorum longus and sometimes fused to it, but is not present in all people. Thick bands of connective tissue called the superior extensor retinaculum and inferior extensor retinaculum, hold the tendons of these muscles in place during dorsiflexion.

The muscles of the superficial posterior compartment of the leg all insert onto the calcaneus, with two of them forming the calcaneal (Achilles) tendon. The most superficial and visible muscle of the calf is the gastrocnemius. Deep to the gastrocnemius is the wide, flat soleus. The plantaris runs obliquely between the two; some people may have two of these muscles, whereas no plantaris is observed in about seven percent of other cadaver dissections.

There are four deep muscles in the posterior compartment of the leg as well: the popliteus, flexor digitorum longus, flexor hallucis longus, and tibialis posterior. The popliteus does not cross the ankle joint. Instead it acts on the knee joint to medially rotate and “unlock” the knee from full extension.

Intrisinc Muscles of the Foot

This content will be covered in a lecture video.

The intrinsic muscles originate and insert within the foot. These muscles primarily provide support for the foot and its arch, and contribute to movements of the toes.

The dorsal group includes two muscles, the extensor digitorum brevis and extensor hallucis brevis (not labeled on the image below).

The plantar group consists of ten muscles in four layers, and these layers can be used to help you organize the muscles as you study. However, we will not ask you to indicate which layer each muscle is located in. 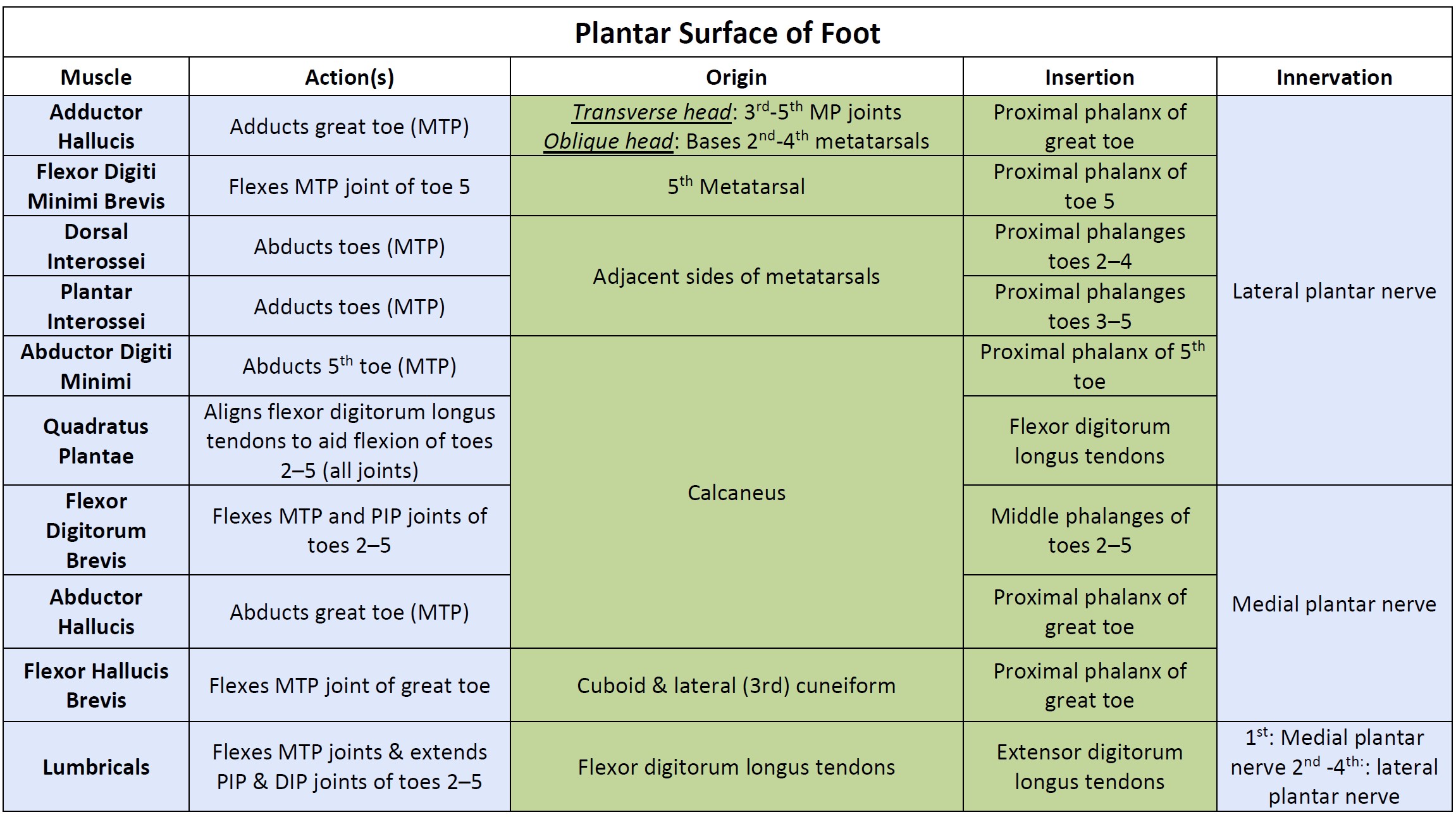