*NOTE – The table below contains the same information from M30. However, now the only bones presented are the humerus, radius, and ulna.

Bones and Bony Landmarks of the Arm and Forearm

Joints of the elbow and forearm

The elbow joint is a uniaxial hinge joint formed by the humeroulnar joint, the articulation between the trochlea of the humerus and the trochlear notch of the ulna. Also associated with the elbow are the humeroradial joint and the proximal radioulnar joint. All three of these joints are enclosed within a single articular capsule.

The articular capsule of the elbow is thin on its anterior and posterior aspects, but is thickened along its outside margins by strong intrinsic ligaments. These ligaments prevent side-to-side movements and hyperextension. On the medial side is the triangular ulnar collateral ligament. This arises from the medial epicondyle of the humerus and attaches to the medial side of the proximal ulna. The strongest part of this ligament is the anterior portion, which resists hyperextension of the elbow.

The ulnar collateral ligament may be injured by frequent, forceful extensions of the forearm, as is seen in baseball pitchers. Reconstructive surgical repair of this ligament is referred to as Tommy John surgery, named for the former major league pitcher who was the first person to have this treatment.

The lateral side of the elbow is supported by the radial collateral ligament. This arises from the lateral epicondyle of the humerus and then blends into the lateral side of the annular ligament. The annular ligament encircles the head of the radius. This ligament supports the head of the radius as it articulates with the radial notch of the ulna at the proximal radioulnar joint. This is a pivot joint that allows for the rotation of the radius during supination and pronation of the forearm.

The forearm, made of the radius and ulna bones, has four main types of action: flexion and extension occur at the elbow joint, whereas pronation and supination occur between the radius and ulna. The elbow flexors include the biceps brachii, brachialis, and brachioradialis. The two-headed biceps brachii crosses the shoulder and elbow joints, causing shoulder and elbow flexion. Also, the biceps brachii is the primary supinator of the forearm. The primary elbow extensor is the triceps brachii. The pronators are the pronator teres and the pronator quadratus, and the supinator is the only one that turns the palm anteriorly. When the palm faces anteriorly, it is supinated. When the palm faces posteriorly, it is pronated.

Use the image/table below to understand the actions, origins, insertions, and innervation of the muscles that move the elbow and forearm.

*Note: Any box shaded in blue on the muscle chart requires you to know all the information (e.g., action, origin, insertion, and innervation) provided. Areas shaded in green require muscle identification and a general sense of the location of the origin or insertion. (e.g., knowing that the rhomboids originate on the vertebrae, as opposed to the specific numbered vertebrae). 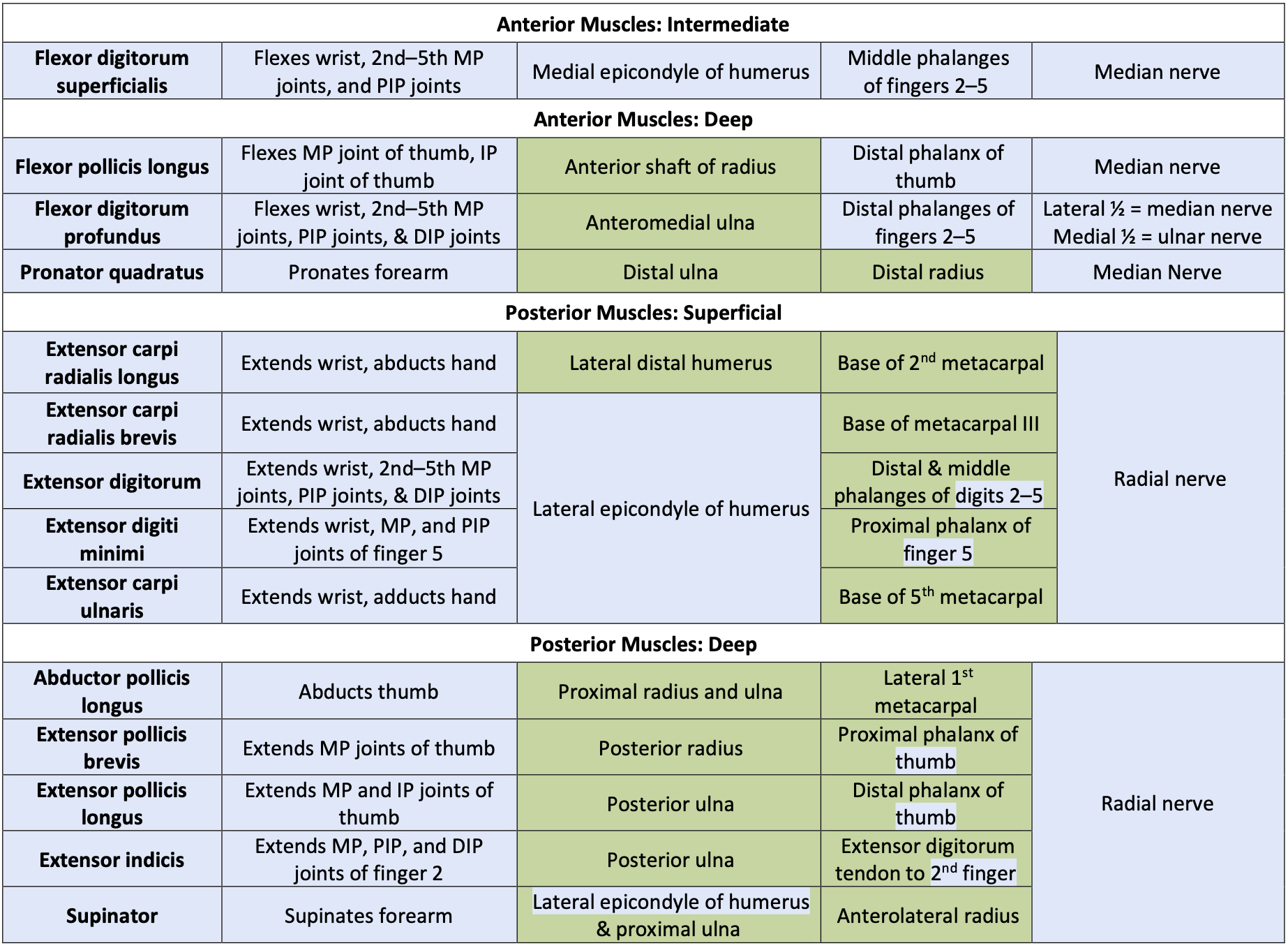 Muscles That Move the Wrist, Hand, and Fingers

Muscles of the Forearm That Move the Wrists, Hands, and Fingers