The largest database[1] of organic compounds lists about 10 million substances, which include compounds originating from living organisms and those synthesized by chemists. The number of potential organic compounds has been estimated[2] at 1060—an astronomically high number. The existence of so many organic molecules is a consequence of the ability of carbon atoms to form up to four strong, covalent bonds to other carbon atoms, resulting in chains and rings of many different sizes, shapes, and complexities.

The simplest organic compounds contain only the elements carbon and hydrogen and are called hydrocarbons. Even though they are composed of only two types of atoms, there is a wide variety of hydrocarbons because they may contain varying lengths of chains, branched chains, rings of carbon atoms, or combinations of these structures. Many hydrocarbons are found in plants, animals, and their fossils; other hydrocarbons have been prepared in the laboratory. We use hydrocarbons every day, mainly as fuels, such as natural gas, acetylene, propane, butane, and components of gasoline, diesel fuel, and heating oil. The familiar plastics polyethylene, polypropylene, and polystyrene are also hydrocarbons. Several classifications of hydrocarbons can be defined by the type(s) of carbon-carbon bonds present. We will discuss several types in the following sections.

Nomenclature is a set of rules to allow for systematic, and consistent, naming of chemical compounds. The International Union of Pure and Applied Chemistry (IUPAC) has devised a system of nomenclature that begins with the names of the alkanes and can be adjusted from there to account for more complicated structures.

The nomenclature for alkanes is based on two rules:

We call a substituent that contains one less hydrogen than the corresponding alkane an alkyl group. The name of an alkyl group is obtained by dropping the suffix -ane of the alkane name and adding -yl:

The open bonds in the methyl and ethyl groups indicate that these alkyl groups are bonded to another atom. The names and structures of these and several other alkyl groups are listed in the following table:

Note that alkyl groups do not exist as stable independent entities. They are always a part of some larger molecule. 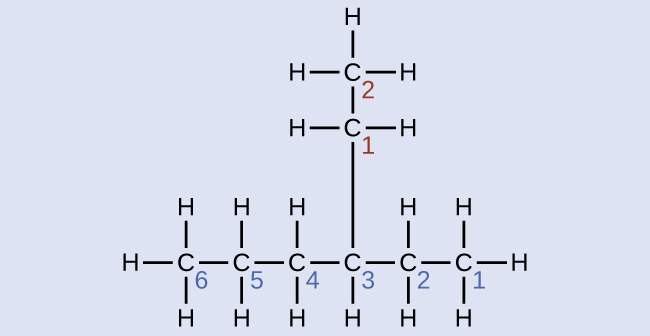 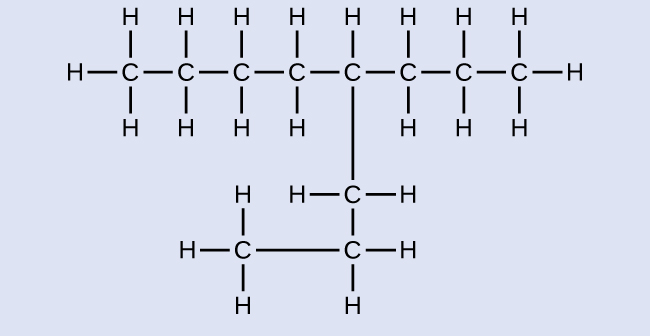 Hydrocarbons with the same formula, including alkanes, can have different structures. For example, two alkanes have the formula C4H10: They are called n-butane and 2-methylpropane (or isobutane), and have the following Lewis structures.)

The compounds n-butane and 2-methylpropane are structural isomers (the term constitutional isomers is also commonly used). Structural isomers have the same molecular formula but different spatial arrangements of the atoms in their molecules. The n-butane molecule contains an unbranched chain, meaning that no carbon atom is bonded to more than two other carbon atoms. We commonly use the term normal, or the prefix n, to refer to a chain of carbon atoms without branching. The compound 2–methylpropane has a branched chain (the carbon atom in the center of the Lewis structure is bonded to three other carbon atoms.)

Determining Possible Structural Isomers from a chemical formula
Use bond-line structures to indicate all possible structural isomers of heptane, C7H16.

Strategy: An orderly approach can be helpful!

Check Your Learning
How many structural isomers of C4H9Cl are there?
Hint: Start by finding the isomers of butane, without the chlorine, and then find unique places to substitute a Cl for a H in the molecules.

The following table demonstrates how increasing the molar mass of straight chain alkanes affects many properties of the compound:

Cycloalkanes are cyclic alkanes where the carbon atoms are connected in a ring. They have a general formula of CnH2n. This differs from the general alkane formula because in joining the carbon atoms into a ring, two hydrogen atoms will have been removed.

They are named in the same manner as alkanes but with the prefix cyclo- added to the name.

Alkanes are relatively stable molecules, but heat or light can activate reactions that involve the breaking of C–H or C–C single bonds. The combustion of methane is one such reaction:

Alkanes burn in the presence of oxygen, a highly exothermic oxidation-reduction reaction that produces carbon dioxide and water. As a consequence, alkanes are excellent fuels. For example, methane, CH4, is the principal component of natural gas. Butane, C4H10, used in camping stoves and lighters is an alkane. Gasoline is a liquid mixture of continuous- and branched-chain alkanes, each containing from five to nine carbon atoms, plus various additives to improve its performance as a fuel. Kerosene, diesel oil, and fuel oil are primarily mixtures of alkanes with higher molecular masses. The main source of these liquid alkane fuels is crude oil, a complex mixture that is separated by fractional distillation. Fractional distillation takes advantage of the different boiling points for components of the mixture. This is a real life example of how boiling point is a function of intermolecular interactions.

The basis of all organic molecules are carbon atoms, which can form up to four strong bonds to other carbon atoms. These bonds result in chains and rings of many different sizes, shapes, and complexities that we will start to unpack in this course. The first subset of organic molecules are alkanes, which contain only single bonds between carbon atoms. In order to consistently name a molecule, it is important to always use the longest carbon chain as the root of the molecular name, giving any substituents not in the longest chain the smallest numbers possible. Common substituents tend to be alkyl groups, halogens, or functional groups.

Many molecules can form isomers, where both molecules must have the same chemical formula. The first isomer included in this unit is a structural (or constitutional) isomer which differ in their connectivity. Often, one isomer will have a longer carbon backbone chain with few substituents while the other isomer has a shorter carbon backbone chain with more substituents. Hydrocarbons are governed by dispersion forces, unless the molecule contains polar bonds from electronegative substituents.

hydrocarbon
a molecule that contain only the elements carbon and hydrogen