In this section, we take a closer look at crystalline solids by looking at elemental metals. The structure of these solids can be described by their unit cells. We will look at the most basic unit cell here — the primitive cubic cell.

Over 90% of naturally occurring and man-made solids are crystalline. Most solids form with a regular arrangement of their particles because the overall attractive interactions between particles are maximized, and the total intermolecular energy is minimized, when the particles pack in the most efficient manner. The regular arrangement at an atomic level is often reflected at a macroscopic level.

The Structures of Metals

We will begin our discussion of crystalline solids by considering elemental metals, which are relatively simple because each contains only one type of atom. A pure metal is a crystalline solid with metal atoms packed closely together in a repeating pattern. Some of the properties of metals in general, such as their malleability and ductility, are largely due to having identical atoms arranged in a regular pattern. The different properties of one metal compared to another partially depend on the sizes of their atoms and the specifics of their spatial arrangements.

The structure of a crystalline solid, whether a metal or not, is best described by considering its simplest repeating unit, which is referred to as its unit cell. The unit cell consists of lattice points that represent the locations of atoms or ions. The entire structure then consists of this unit cell repeating in three dimensions, as illustrated in Figure 1.

Let us begin our investigation of crystal lattice structure and unit cells with the most straightforward structure and the most basic unit cell. To visualize this, imagine taking a large number of identical spheres, such as tennis balls, and arranging them uniformly in a container. The simplest way to do this would be to make layers in which the spheres in one layer are directly above those in the layer below, as illustrated in Figure 2. This arrangement is called primitive cubic structure, and the unit cell is called the primitive cubic unit cell or simple cubic unit cell.

In a primitive cubic structure, the spheres are not packed as closely as they could be, and they only “fill” about 52% of the volume of the container. This is a relatively inefficient arrangement, and only one metal (polonium, Po) crystallizes in a simple cubic structure. As shown in Figure 3, a solid with this type of arrangement consists of planes (or layers) in which each atom contacts only the four nearest neighbors in its layer; one atom directly above it in the layer above; and one atom directly below it in the layer below. The number of other particles that each particle in a crystalline solid contacts is known as its coordination number. For a polonium atom in a primitive cubic array, the coordination number is six.

Calculation of Atomic Radius and Density for Metals, Part 1
The edge length of the unit cell of alpha polonium is 336 pm. 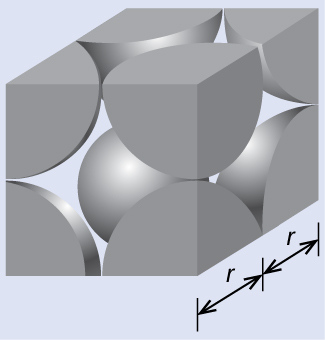 (a) Two adjacent Po atoms contact each other, so the edge length of this cell is equal to two Po atomic radii: l = 2r. Therefore, the radius of Po is r =

(b) Density is given by density =

The mass of a Po unit cell can be found by:

The volume of a Po unit cell can be found by:

(Note that the edge length was converted from pm to cm to get the usual volume units for density.) Therefore,

Check Your Learning
The edge length of the unit cell for nickel is 0.3524 nm. The density of Ni is 8.90 g/cm3. Does nickel crystallize in a simple cubic structure? Explain.

No. If Ni was simple cubic, its density would be given by:

Then the density of Ni would be

Since the actual density of Ni is not close to this, Ni does not form a simple cubic structure.

A unit cell is the simplest repeating unit of a crystalline solid. The simplest unit cell is the primitive cubic unit cell in which there are atoms at each of the 8 corners of a cube. In this type of unit cell: the coordination number is 6, there is 1 atom per cell, and the length of the edge of a cell is equal to 2r.