Two organic molecules – butane (C4H10) and butanoic acid (C4H8O2) – will be used throughout this section to demonstrate some of the more prominent drawing conventions.

Lewis structures can be very useful. By showing all electron domains (bonding or non-bonding), they allow for easy determination of electron and molecular geometry.  It is relatively simple to tell if the ‘octet rule’ is adhered to and to calculate formal charges.  However, there are also some drawbacks as they quickly become complicated and unwieldy as molecules become larger. They are also not 3-dimensional representations.

More information or practice problems about this topic can be found at: Lewis Structures (M8Q2)

The main benefit of using dash-wedge structures is that they more accurately show three-dimensional structure; however, they can become unmanageable as molecules become larger and too time-consuming to draw.

Line structures are easier to draw than the previously discussed structures, especially for complicated molecules; however, they do not accurately represent three-dimensional structure and can be difficult to interpret at first glance.

Solution
Each carbon atom is converted into the end of a line or the place where lines intersect. All hydrogen atoms attached to the carbon atoms are left out of the structure (although we still need to recognize they are there):

Check Your Learning
Draw the bond line structures for these two molecules:

Location of the hydrogen atoms:

This compound contains 16 hydrogen atoms for a molecular formula of C8H16.

Check Your Learning
Identify the chemical formula of the molecule represented here:

Condensed formulas show all atoms but leave out most or all bonds. Parentheses are used to show groups of atoms (branches) bonded to the nearest non-hydrogen atom to the left. 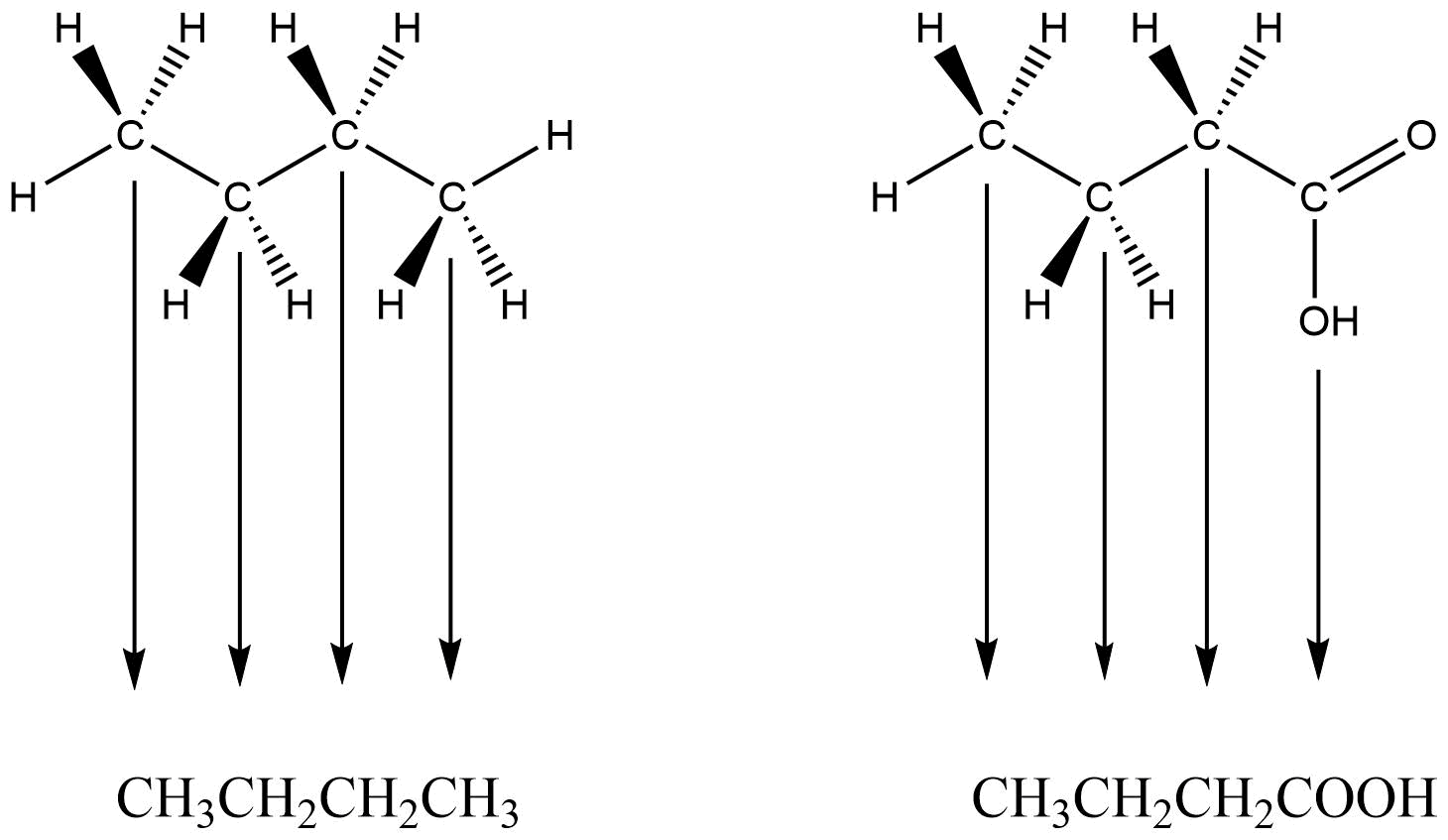 Condensed formulas allow bonding and atomic arrangements to be inferred from how the formula is written from left to right.  They do not require special graphics programs to create them, but it is possible to write multiple condensed formulas for the same molecule. They can also be complicated and do not depict three-dimensional structure.

Uniform representations of molecules is extremely important when using chemistry across different sciences and languages. The process for naming and drawing molecules is quite straightforward, although it requires a basic understanding of organic chemistry. In this section, we looked at the four primary ways of drawing a molecule, with the most common way being the bond-line structure. Feeling comfortable with all four methods, but especially bond-line structures, is of fundamental importance to understanding organic chemistry.

condensed formula
show all atoms but leave out most (or all) bonds. Parantheses are used to show groups of atoms (branches) bonded to the nearest non-hydrogen atom to the left