The section explores how heat is an intrinsic component of physical and chemical changes. This section includes worked examples, sample problems, and a glossary.

Every physical and chemical change involves energy changes as well. For example, when water is boiled and evaporated, heat must be added to the liquid water to form gaseous water. In this example, the process is endothermic, meaning that it requires energy.

Conversely, when liquid water freezes to form ice, heat is lost during this process. In this example, the process is exothermic, meaning that it releases energy.

Like other quantities in balanced chemical equations, energy scales with the amount of reactants used and products formed. We can examine the combustion and electrolysis of water (two chemical changes) to see this scaling.

Demonstration: Energy can be released in the form of sound, light, and heat

Explanation. The combustion of the hydrogen and oxygen gases causes an explosion that releases energy. This energy can be observed in the forms of sound, light, and heat. When more hydrogen gas is used in the second explosion, the explosion releases even more energy.

Intuitively, one would predict that if we ignited a larger balloon filled with more hydrogen and oxygen that the explosion would be larger.  In chemistry terms, more energy would be released. Conversely, if we ignited a balloon with less hydrogen and oxygen then the explosion would be smaller. Again, in chemistry terms, less energy would be released. In other words, the energy scales with reaction stoichiometry.

One can carefully quantify this energy released. When two moles of hydrogen gas combust in the presence of one mole of oxygen gas, then two moles of liquid water are formed and 483.6 kJ of energy are released.

Electrolysis of liquid water to form hydrogen and oxygen is the reverse chemical reaction to the combustion. The amount of energy is the same, but it is a reactant in the chemical equation instead of a product.

Set up. In this demonstration, electrolysis is performed on a solution of water that has been slightly acidified with H2SO4. The sulfuric acid acts as the electrolyte in this demonstration, carrying the charge between the anode and cathode. A DC voltage is applied to two electrodes, labeled “DC (-)” and “DC (+)”. These are the anode (negative electrode) and cathode (positive electrode), respectively. The following image explains the different parts of the apparatus that you will see in the video. 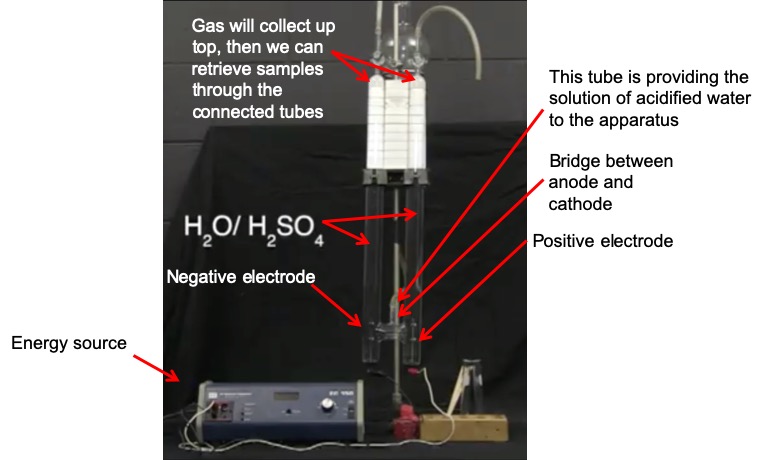 When the energy source is turned on, you will see small bubbles appear in the two columns of solution. These bubbles are filled with H2 and O2 gas. These bubbles will float upward and gather at the top of the columns. We can then collect samples of the gas and ignite them to show that they are indeed H2 and O2 gas.

Prediction. Do you predict more H2 or more O2 gas will be produced?

Explanation. At the frame that is labeled “20 minutes later”, you can see how much gas has been collected in each column. These columns were filled with solution at the beginning of the experiment, but now one column (the left column, negative electrode) has less solution than the other (and therefore it has more gas). The left column actually contains twice the amount of gas as the right column. This is because H2 is collected in the left column and O2 is collected in the right column. According to the stoichiometry of the reaction, for every one O2 that is produced, two H2 molecules are produced:

This reaction would not have occurred if we did not turn on the energy source, though. This reaction required an input of energy, and is therefore an endothermic reaction.

Combustion and Limiting Reagents
How much heat is released when 10.0 g hydrogen gas is burned in the presence of 10.0 g oxygen gas?

Solution
First, determine the amount of heat that can be released by burning the 10.0 g hydrogen in excess oxygen.  Note that the balanced chemical equation states that 483.6 kJ of energy is released per two mol hydrogen used up:

Second, determine the amount of heat that can be released by burning the 10.0 g oxygen in excess hydrogen.  Note that the balanced chemical equation states that 483.6 kJ of energy is released per one mol oxygen used up:

Check Your Learning
How many grams of water can be generated if 242 kJ energy was released when hydrogen and oxygen were burned.

endothermic
a reaction in which energy is absorbed from the surroundings

exothermic
a reaction in which energy is released to the surroundings