The section explores empirical formulas and the use of combustion to analyze a compound. This section includes worked examples, sample problems, and a glossary.

As previously mentioned, the most common approach to determining a compound’s chemical formula is to first measure the masses of its constituent elements. However, we must keep in mind that chemical formulas represent the relative numbers, not masses, of atoms in the substance. Therefore, any experimentally derived data involving mass must be used to derive the corresponding numbers of atoms in the compound. To accomplish this, we can use molar masses to convert the mass of each element to number of moles. We then consider the moles of each element relative to each other, converting these numbers into a whole-number ratio that can be used to derive the empirical formula of the substance. Consider a sample of compound determined to contain 1.71 g C and 0.287 g H. The corresponding numbers of atoms (in moles) are:

Thus, we can accurately represent this compound with the formula C0.142H0.285. Of course, per accepted convention, formulas contain whole-number subscripts, which can be achieved by dividing each subscript by the smaller subscript:

(Recall that subscripts of “1” are not written but rather assumed if no other number is present.)

The empirical formula for this compound is thus CH2. This may or not be the compound’s molecular formula as well; however, we would need additional information to make that determination (as discussed later in this section).

Consider as another example a sample of compound determined to contain 5.31 g Cl and 8.40 g O. Following the same approach yields a tentative empirical formula of:

In this case, dividing by the smallest subscript still leaves us with a decimal subscript in the empirical formula. To convert this into a whole number, we must multiply each of the subscripts by two, retaining the same atom ratio and yielding Cl2O7 as the final empirical formula.

In summary, empirical formulas are derived from experimentally measured element masses by:

Figure 1 outlines this procedure in flow chart fashion for a substance containing elements A and X.

A sample of the black mineral hematite (Figure 2), an oxide of iron found in many iron ores, contains 34.97 g of iron and 15.03 g of oxygen. What is the empirical formula of hematite?

Solution
For this problem, we are given the mass in grams of each element. Begin by finding the moles of each:

Next, derive the iron-to-oxygen molar ratio by dividing by the lesser number of moles:

The ratio is 1.000 mol of iron to 1.500 mol of oxygen (Fe1O1.5). Finally, multiply the ratio by two to get the smallest possible whole number subscripts while still maintaining the correct iron-to-oxygen ratio:

The empirical formula is Fe2O3.

Check Your Learning
What is the empirical formula of a compound if a sample contains 0.130 g of nitrogen and 0.370 g of oxygen?

Finally, with regard to deriving empirical formulas, consider instances in which a compound’s percent composition is available rather than the absolute masses of the compound’s constituent elements. In such cases, the percent composition can be used to calculate the masses of elements present in any convenient mass of compound; these masses can then be used to derive the empirical formula in the usual fashion. Since the scale for percentages is 100, it is most convenient to assume a 100 g sample to calculate the mass of each element.

The bacterial fermentation of grain to produce ethanol forms a gas with a percent composition of 27.29% C and 72.71% O (Figure 3). What is the empirical formula for this gas?

Solution
Since the scale for percentages is 100, it is most convenient to calculate the mass of elements present in a sample weighing 100 g. The calculation is “most convenient” because, per the definition for percent composition, the mass of a given element in grams is numerically equivalent to the element’s mass percentage. This numerical equivalence results from the definition of the “percentage” unit, whose name is derived from the Latin phrase per centum meaning “by the hundred.” Considering this definition, the mass percentages provided may be more conveniently expressed as fractions:

The molar amounts of carbon and hydrogen in a 100-g sample are calculated by dividing each element’s mass by its molar mass:

Coefficients for the tentative empirical formula are derived by dividing each molar amount by the lesser of the two:

Since the resulting ratio is one carbon to two oxygen atoms, the empirical formula is CO2.

Recall that empirical formulas are symbols representing the relative numbers of a compound’s elements. Determining the absolute numbers of atoms that compose a single molecule of a covalent compound requires knowledge of both its empirical formula and its molecular mass or molar mass. These quantities may be determined experimentally by various measurement techniques. Molecular mass, for example, is often derived from the mass spectrum of the compound (see discussion of this technique in the section on mass spectrometry of molecules from earlier in the semester). Molar mass can be measured by a number of experimental methods, many of which will be introduced in later chapters of this text.

Molecules of this compound are then represented by molecular formulas whose subscripts are six times greater than those in the empirical formula:

Determination of the Molecular Formula for Nicotine

Next, we calculate the molar ratios of these elements relative to the least abundant element, N.

We calculate the molar mass for nicotine from the given mass and molar amount of compound:

Thus, we can derive the molecular formula for nicotine from the empirical formula by multiplying each subscript by two:

The elemental composition of hydrocarbons and related compounds may be determined via a method known as combustion analysis. In a combustion analysis, a weighed sample of the compound is heated to a high temperature under a stream of oxygen gas, resulting in its complete combustion to yield gaseous products of known identities. The complete combustion of hydrocarbons, for example, will yield carbon dioxide and water as the only products. The gaseous combustion products are swept through separate, preweighed collection devices containing compounds that selectively absorb each product (Figure 4). The mass increase of each device corresponds to the mass of the absorbed product and may be used in an appropriate stoichiometric calculation to derive the mass of the relevant element.

Polyethylene is a hydrocarbon (with formula CxHy) polymer used to produce food-storage bags and many other flexible plastic items. A combustion analysis of a 0.00126-g sample of polyethylene yields 0.00394 g of CO2 and 0.00161 g of H2O. What is the empirical formula of polyethylene?

Note that a balanced equation is not necessary for the task at hand. To derive the empirical formula of the compound, only the subscripts x and y are needed.

First, calculate the molar amounts of carbon and hydrogen in the sample, using the provided masses of the carbon dioxide and water, respectively. With these molar amounts, the empirical formula for the compound may be written as described earlier. An outline of this approach is given in the following flow chart: 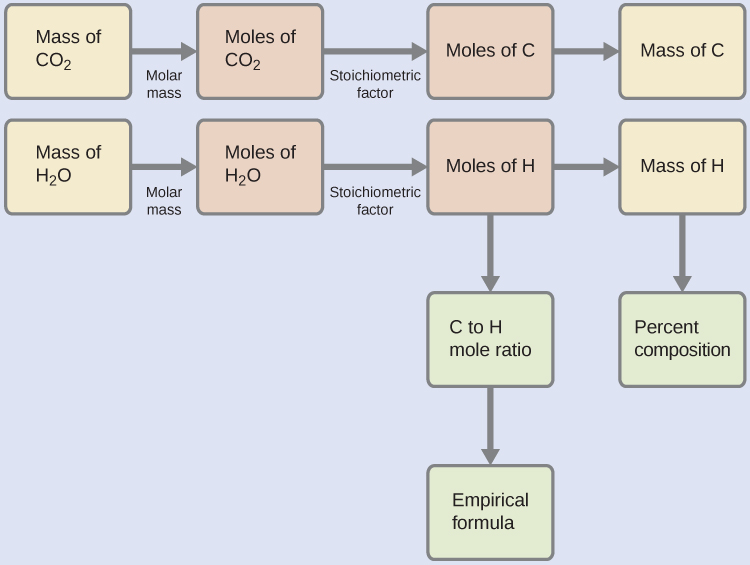 The empirical formula for the compound is then derived by identifying the smallest whole-number multiples for these molar amounts. The H-to-C molar ratio is

and the empirical formula for polyethylene is CH2.

Check Your Learning
A 0.00215-g sample of polystyrene, a polymer composed of carbon and hydrogen, produced 0.00726 g of CO2 and 0.00148 g of H2O in a combustion analysis. What is the empirical formula for polystyrene?

Combustion analysis of 23.1 mg of a white powder that contains only the elements C, H, and O yields 33.9 mg of CO2 and 13.9 mg of H2O. Determine the empirical formula of the white compound.

The mass of C and H in the white powder that produced the quantities of CO2 and H2O in the analysis must first be determined. This enables the amount of O in the compound to be calculated by subtraction, as this oxygen does not react in the combustion process.:

Because the white powder consists of just three elements and we now know the mass of two of them, the mass of O is the remainder:

Now the moles of each element can be determined, and the empirical formula determined:

Dividing each of these by the smallest number of moles (7.69 x 10-4 mol) yields the empirical formula: CH2O

This approach is outlined in the following flow chart:

The hard mass spectrum indicates the compound consists of the elements C, H, and O.

The chemical identity of a substance is defined by the types and relative numbers of atoms composing its fundamental entities. To determine an empirical formula, you must find the smallest whole-number ratio of atoms in a molecule. If you begin with the mass of each element in the compound, you must first convert these masses to moles before determining the ratio. A compound’s percent composition provides the mass percentage of each element in the compound, and it is often experimentally determined and used to derive the compound’s empirical formula. The empirical formula mass of a covalent compound may be compared to the compound’s molecular or molar mass to derive a molecular formula.  Combustion analysis can be used to identify an unknown hydrocarbon because the identity of the products are known to be CO2 and H2O.