This section explores isotopes. We’ll examine how we use mass spectrometry to precisely measure the mass and abundance of a given element’s isotopes. The section below provides more detailed description of these topics, worked examples, and practice problems.

Set up. As shown in the table above, hydrogen and oxygen each have three isotopes. Of these isotopes, hydrogen-1 and oxygen-16 are by far the most abundant isotopes. Therefore, water molecules typically consist of two hydrogen-1 atoms and one oxygen-16 atom, giving a molecular weight of 18 amu. It is possible to form “heavy water”—water that is composed of two hydrogen-2 atoms and one oxygen-16 atom. This heavy water has a molecular weight of 20 amu. In this demonstration, we compare the density of solid regular water (regular ice) and solid heavy water (“heavy water ice”) by placing each into a glass of liquid regular water.

Prediction. Before watching the video, make a prediction about whether the heavy water ice will float or sink in the glass of liquid water.

Use this Build an Atom simulator to build atoms of the first 10 elements, see which isotopes exist, check nuclear stability, and gain experience with isotope symbols.

The mass of an element shown in a periodic table or listed in a table of atomic masses is a weighted average mass of all the isotopes present in a naturally occurring sample of that element. This is equal to the sum of each individual isotope’s mass multiplied by its fractional abundance.

It is important to understand that no single boron atom weighs exactly 10.8 amu—10.8 amu is the average mass of all boron atoms, and individual boron atoms weigh either 10 amu or 11 amu.

The average mass of neon in the solar wind is 20.15 amu. (The average mass of a terrestrial neon atom is 20.1796 amu. This result demonstrates that we may find slight differences in the natural abundance of isotopes depending on their origin.)

We can also do variations of this type of calculation, as shown in the next example.

Calculation of Percent Abundance
Naturally occurring chlorine consists of 35Cl (mass 34.96885 amu) and 37Cl (mass 36.96590 amu), with an average mass of 35.453 amu. What is the percent composition of Cl in terms of these two isotopes?

Substituting this into the average mass equation, we have:

Visit this site to make mixtures of the main isotopes of the first 18 elements, gain experience with average atomic mass, and check naturally occurring isotope ratios using the Isotopes and Atomic Mass simulation.

The occurrence and natural abundance of isotopes can be experimentally determined using an instrument called a mass spectrometer. Mass spectrometry (MS) is widely used in chemistry, forensics, medicine, environmental science, and many other fields to analyze and help identify the substances in a sample of material. There are many types of mass spectrometers, but we will concern ourselves with two styles: hard ionization and soft ionization mass spectrometers. In a hard-ionization mass spectrometer (Figure 2), the sample is vaporized and exposed to a high-energy plasma that causes any chemical bonds in the sample to be broken and the constituent atoms to become electrically charged, typically by losing one or more electrons. These cations then pass through a (variable) electric or magnetic field that deflects each cation’s path to an extent that depends on both its mass and charge (similar to how the path of a large steel ball bearing rolling past a magnet is deflected to a lesser extent than that of a small steel BB). The magnetic field deflects low mass ions more than high mass ions of the same charge. The ions are detected, and a plot of the relative number of ions generated versus their mass-to-charge ratios (a mass spectrum) is made. The height of each vertical feature or peak in a mass spectrum is proportional to the fraction of ions with the specified mass-to-charge ratio. Mass spectrometers can measure masses with very high resolution, on the order of 0.0001 amu. Thus, atoms with only slight differences in mass, such as isotopes, are readily detected and their relative abundances measured.

Mass spectra of elements reveal the isotopic composition of the elements. The hard-ionization mass spectrum of a sample of Mg exhibits three peaks at mass-to-charge ratios (m/Z) of 24, 25, and 26 amu (Figure 3), indicating that the element magnesium consists of three isotopes. Although it is Mg ions that arrive at the detector of the mass spectrometer and not Mg atoms, the numbers on the x-axis indicate the mass of each atom of the isotope because the mass of a Mg ion is almost the same as a Mg atom. The relative height of each peak, often expressed as a percentage value, are the natural abundance of each isotope: 79%, 10%, and 11%, respectively, the sum of which is 100%. The element magnesium therefore has 79% of the isotope 24Mg with 12 neutrons and 12 protons for a total mass of 24 amu. Because all Mg atoms have 12 protons, the two less abundant isotopes have 13 and 14 neutrons.

Check with your Lead instructor or TA to determine how in depth this section will be covered.

We’ve learned in the previous module on atoms and molecules that a chemical formula uses symbols and subscripts to represent the identity and abundance of atoms in a compound. But, how do we know this information? The previous section discussed the general analysis of the natural abundance of isotopes. Here, we’ll discuss simplified analysis of molecules through hard and soft ionization of molecules.

When a molecule is subjected to hard ionization, all covalent bonds are broken to produce monatomic ions. In the mass spectrum of hard MS, the mass to charge ratio (m/Z) on the x-axis tells the mass of the ion (i.e., amu if all ions have a +1 charge). The identity of the ion can then be inferred using the periodic table and its relative abundance determined using the height (y-value) of the peak. Unlike hard MS, soft MS does not break the covalent bonds of the molecule. Because the molecule remains intact, soft MS tells the molecular weight of the whole compound on the x-axis, and the relative abundance on the y-axis.

Figure 4 and Figure 5 illustrate the difference between hard and soft MS of carbon dioxide, CO2. When all atom-to-atom bonds are broken in CO2 during hard ionization, the result is one C+ ion and two O+ ions.

Note that there are three discrete peaks visible in the mass spectra of CO2: one major peak at 12 amu, one very small peak at 13 amu, and a major peak at 16 amu. (Remember that we are assuming that the charge, Z, is equal to +1. This means that if the peak is at m/Z = 12, then m must be 12 amu.) The peaks at 12 and 13 amu correspond to the two major isotopes of the element carbon, carbon-12 (98.9%) and carbon-13 (1.1% ). No peak is detected for carbon-14 as its natural abundance is extremely low. Separate analysis shows that the element oxygen is composed of mainly the isotope oxygen-16 (99.76%) with just trace amounts of two other isotopes, oxygen-17 and oxygen-18. Like carbon-14, these are not detected by this mass spectrometer due to their low natural abundance. The abundance of the peak at 16 amu has relative units of 100. Thus, if we compare the heights of the two major peaks at 12 and 16 amu, the ratio of carbon atoms to oxygen atoms is 1:2, corresponding to the ratio in the formula of carbon dioxide, CO2.

Processing the data from the hard MS and soft MS provides different information. From the hard MS, we can calculate the molar mass of the lowest ratio of atoms, also called the empirical formula. If there is one copy of carbon and two copies of oxygen, then the molecule has a molar mass of 44 or 45 amu, depending on the isotope of carbon in the molecule. Since the molecule is not broken into its constituent parts in soft MS, the soft MS spectrum tells us the molecular weight of the molecule and therefore its molecular formula. The empirical formula from hard MS is the same value as the two peaks in the soft MS, which tells us that the molecular formula of the compound is CO2 (the same as the empirical formula in this instance). The CO2+ ion at 44 amu contains one carbon-12 atom plus two oxygen-16 atoms, while the CO2+ ion at 45 amu contains one carbon-13 atom plus two oxygen-16 atoms. As the abundance of carbon-12 is significantly greater than that of carbon-13, we expect the abundance of the ion at 44 amu to be much greater than that of the ion at 45 amu. Separate analysis shows the abundance to be 989 : 11 like that of the isotopes of the element carbon.

Use these mass spectra data to determine the chemical formula of an unknown compound.  Assume your sample contains only the predominant isotopes of the atoms. 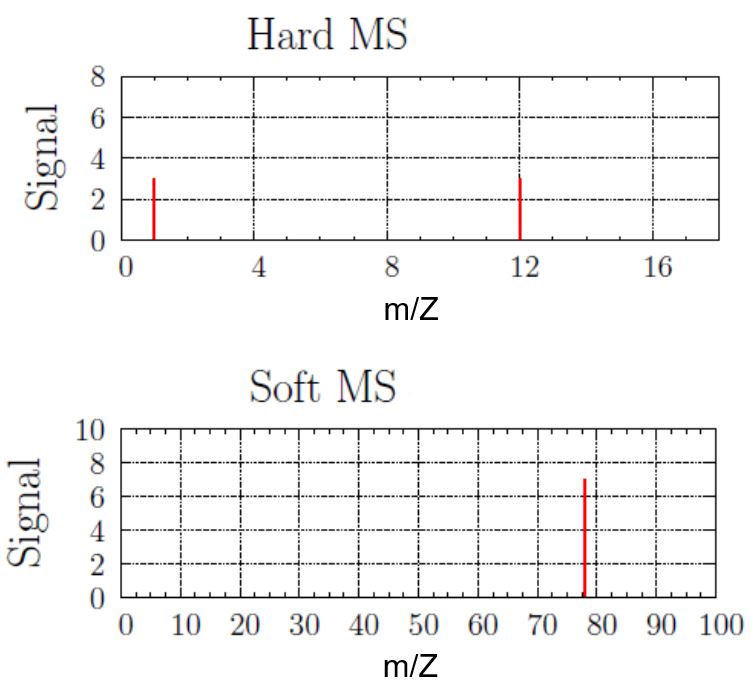 The soft MS has a single peak at 78 amu.  If there was one hydrogen atom and one carbon atom in the molecule, then the mass of the compound would be 13 amu.  However, there is no peak at 13 amu.  There must be multiple copies of the CH-unit in the molecule.  Dividing the molecular weight (78 amu) by the empirical formula’s molecular weight (13 amu) gives the number of copies. There are 78/13 or six copies of the CH unit.  Thus, the unknown compound has a formula of C6H6.

Check Your Learning
Draw both the hard MS and soft MS of water.

The formula for water is H2O.

Use these mass spectra data to determine the chemical formula of an unknown compound.  The element bromine consists of two isotopes, 79Br (50.7%) and 81Br (49.3%).

Solution
The hard MS has peaks at 1 amu, 12 amu, 79 amu and 81 amu. Hydrogen has mass of 1 amu and carbon has mass of 12 amu, and they are in a 3:1 ratio. The two peaks at 79 and 81 amu correspond to the single element, Br, that exists as two isotopes in very nearly equal abundances. Considered as a single element the sum of the two percentages needs to be calculated for comparison with the C and H. This indicates a C:H:Br ratio of 20:60:20 or 1:3:1. and an empirical formula of CH3Br.

The soft MS has two peaks at 94 and 96 corresponding to the molecular weights 94 amu and 96 amu of the two molecules CH379Br and CH381Br respectively. The empirical formula and actual formula are therefore the same for this molecule, i.e., CH3Br.

Check with your Lead instructor or TA to determine how in depth this section will be covered.

Isotopes of an element are atoms with the same atomic number but different mass numbers; isotopes of an element, therefore, differ from each other only in the number of neutrons within the nucleus. When a naturally occurring element is composed of several isotopes, the atomic mass of the element represents the average of the masses of the isotopes involved.

atomic mass
average mass of atoms of an element, expressed in amu