Hydrocarbon molecules with one or more triple bonds are called alkynes; they make up another series of unsaturated hydrocarbons. Two carbon atoms joined by a triple bond are bound together by one σ bond and two π bonds. The sp-hybridized carbons involved in the triple bond have bond angles of 180°, giving these types of bonds a linear, rod-like shape.

The simplest member of the alkyne series is ethyne, C2H2, commonly called acetylene. The Lewis structure for ethyne, a linear molecule, is:

The IUPAC nomenclature for alkynes is similar to that for alkenes except that the suffix -yne is used to indicate a triple bond in the chain. For example, CH3CH2C≡CH is called 1-butyne.

Structure of Alkynes
Describe the geometry and hybridization of the carbon atoms in the following molecule:

Solution
Carbon atoms 1 and 4 have four single bonds and are thus tetrahedral with sp3 hybridization. Carbon atoms 2 and 3 are involved in the triple bond, so they have linear geometries and would be classified as sp hybrids.

Check Your Learning
Identify the hybridization and bond angles at the carbon atoms in the molecule shown:

Benzene, C6H6, is the simplest member of a large family of hydrocarbons, called aromatic hydrocarbons. These compounds can be drawn with alternating single and double bonds in a ring, but a more accurate depiction involves the use of resonance hybrid concept of valence bond theory. To illustrate this concept, consider the resonance structures for benzene, C6H6, below: 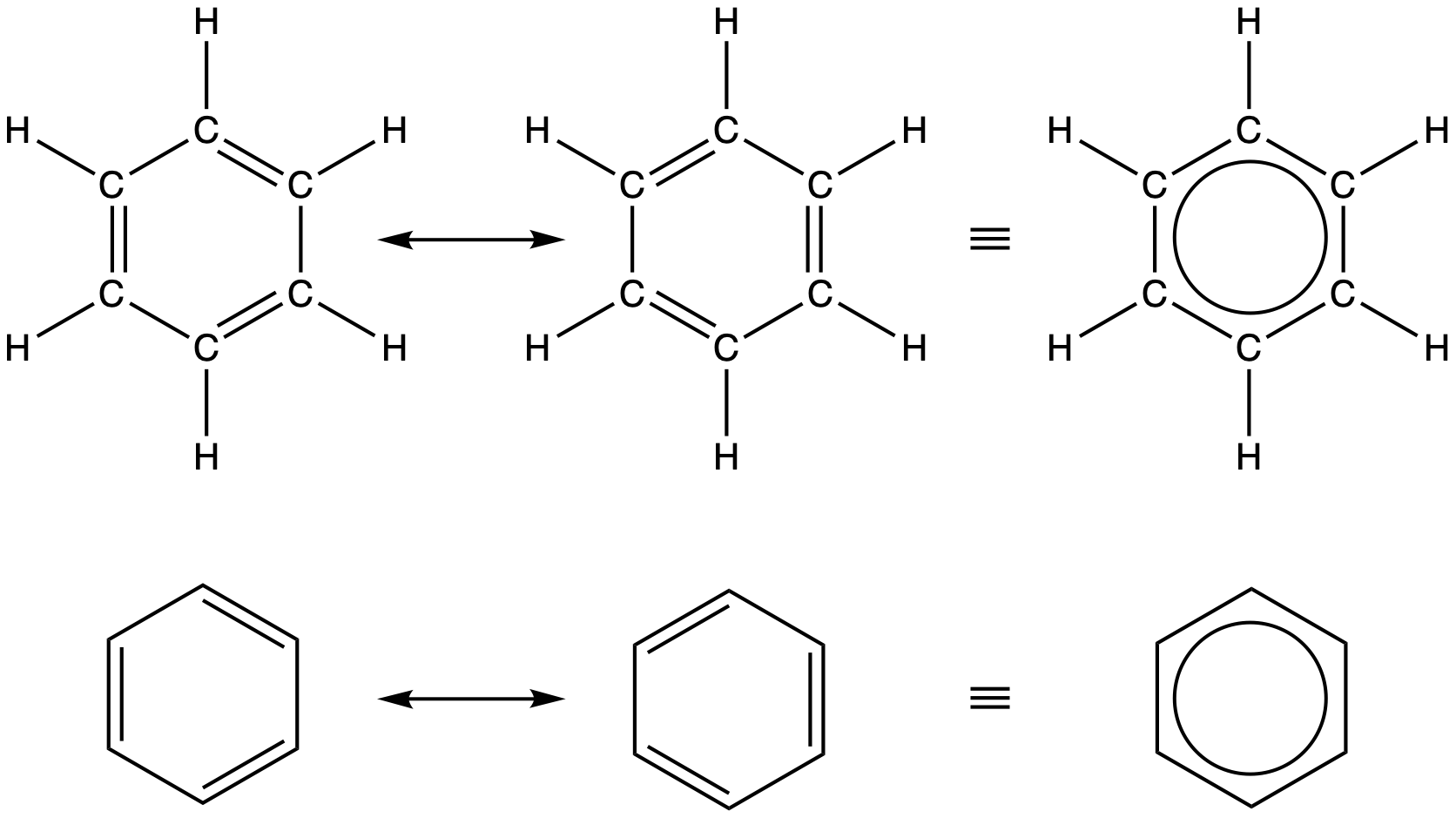 Valence bond theory describes the benzene molecule as a hexagonal ring of sp2-hybridized carbon atoms with the unhybridized p orbital of each carbon atom perpendicular to the plane of the ring (coming straight out and behind the computer screen). Benzene does not, however, exhibit the characteristics expected for a cyclic alkene with alternating single and double bonds. Each of the six C–C bonds is equivalent and exhibits properties that are intermediate between those of a C–C single bond and a C=C double bond (closer to a “1.5” C-C bond). To represent this unique bonding, structural formulas for benzene and its derivatives are typically drawn with single bonds between the carbon atoms and a circle within the ring as shown above.

Structure of Aromatic Hydrocarbons
An aromatic compound with one methyl- and one chloro- substituent is shown below. Draw two constitutional isomers of this molecule that are still aromatic hydrocarbons:

Solution
Since a six-carbon ring with alternating single and double bonds is necessary for the molecule to be classified as aromatic, appropriate isomers can be produced only by changing the positions of the chloro-substituent relative to the methyl-substituent: 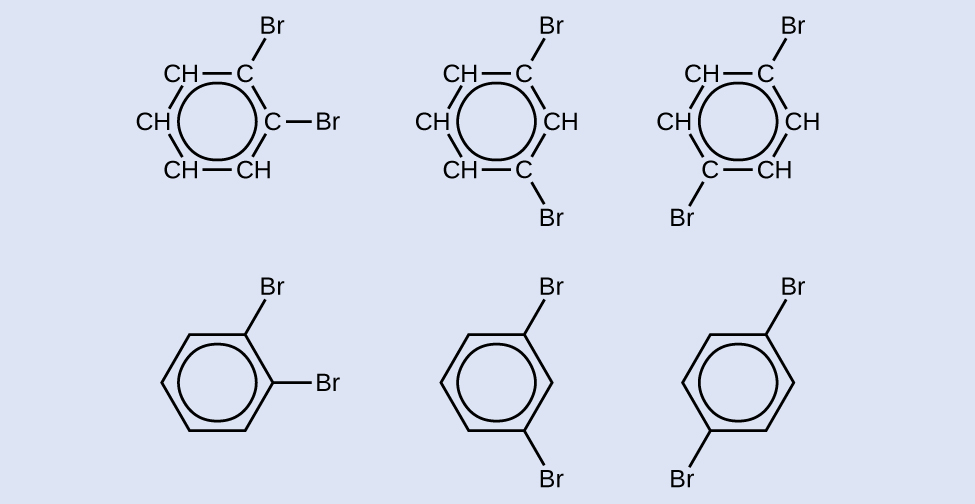 Intermolecular Forces of Alkynes and Aromatics

The intermolecular forces of alkynes are very similar to that of alkanes. Increasing the length of the longest carbon chain will increase the strength of the dispersion forces. As the molar mass of the molecules increases, the boiling and melting points will also increase. Additionally, the less branched an isomer is, the greater surface area the molecule will have to interact with other molecules, leading to stronger dispersion forces and higher boiling and melting points.

Intermolecular forces for aromatic compounds depend greatly on the identity and positioning of the substituents on the ring. For example, long hydrocarbon chain substituents would increase dispersion forces and raise boiling and melting points. The addition of electronegative atoms on the ring would introduce bond dipoles. These dipoles could cancel each other out or create a molecular dipole.

Alkynes are unsaturated molecules that contain at least one triple bond. The nomenclature of alkynes is very similar to alkanes, except that the triple bond is always given the smallest number in the longest carbon chain and the ending changes to -yne from –ane. Alkynes tend to only form structural isomers with other alkynes or alkenes with similar levels of unsaturation. Aromatic molecules contain alternate single and double bonds that leads to resonance, or delocalization of electrons.

alkyne
a molecule that contains one or more triple bond

aromatic hydrocarbon
a molecule that has alternating single and double bonds creating resonance, often in a 6-membered ring. (Note: there are robust rules for determining if a molecule is aromatic that is outside the scope of this course)