The simplest hydrocarbons, alkanes, contain only single bonds between carbon atoms. Each of the carbon atoms in an alkane is bonded to four other atoms, each of which is either carbon or hydrogen. The average bond energies for C–C and C–H bonds are 346 and 436 kJ/mol, respectively. These strong bonds are difficult to break so alkanes are relatively unreactive.

Alkanes that do not contain rings of carbon atoms are called acyclic alkanes; they have the general molecular formula CnH2n+2. A molecular formula, such C6H14 for the alkane named hexane, specifies how many atoms of each type are in the molecule; in C6H14 there are 6 C atoms and 14 H atoms in each molecule. These alkanes are also called saturated hydrocarbons because the C atoms are bonded to the maximum possible number of H atoms. The alkane molecule is said to be “saturated” with hydrogen.

Figure: Methane, Ethane, Pentane. Pictured are the Lewis structures, ball-and-stick models, and space-filling models for molecules of methane, ethane, and pentane. Move the slider to see the various representations.

Unbranched acyclic alkanes are often called “straight-chain” alkanes because the carbon atoms can be drawn in a single, straight row in the Lewis structure. However, the Lewis structure does not represent all aspects of the molecule. As the ball-and-stick and space-filling models of pentane in Figure: Methane, Ethane, Pentane show, the C atoms do not lie in a completely straight line. Why there is a zigzag row of atoms is a topic for Unit 2.

Branched alkanes contain more than one carbon chain. For example, 3-methylpentane has a branch at the third carbon atom along the chain. (The C atoms are numbered with subscripts to show that the branch occurs at the third C atom. The number of the C atom with the branch appears in the name. “Methyl” refers to the group H3C—, which is a methane molecule lacking one H atom.) 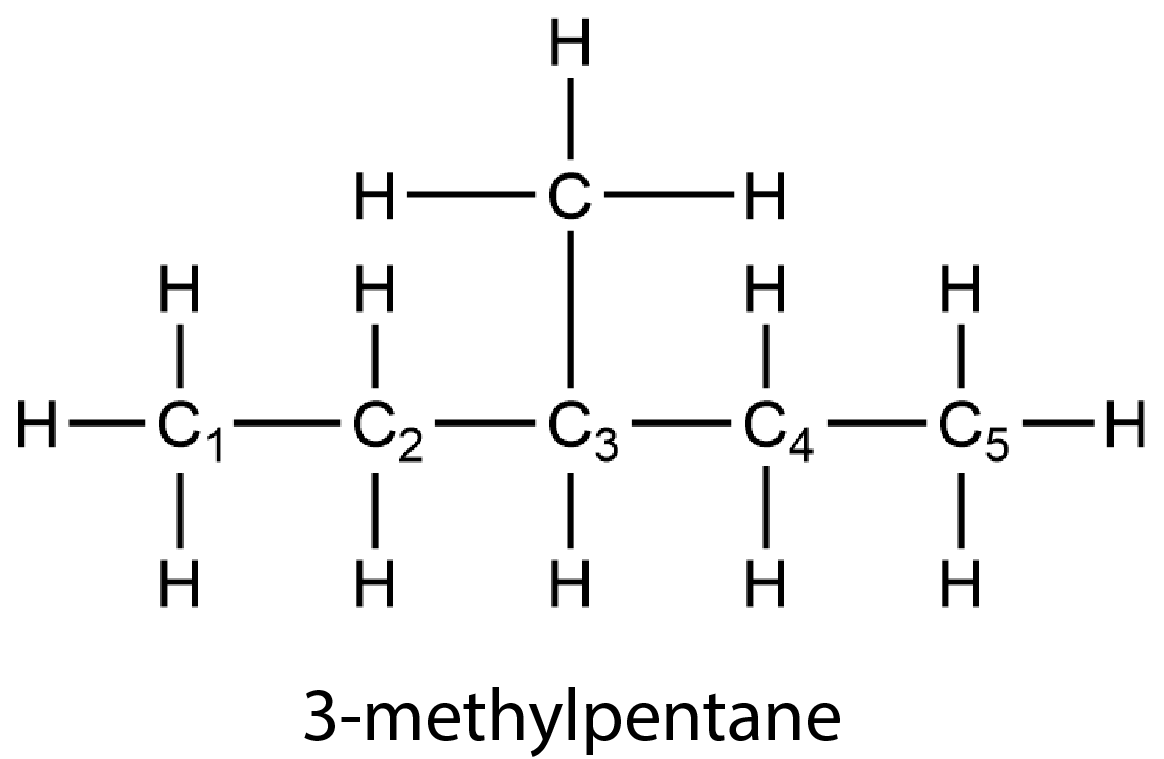 A cycloalkane has at least one ring of carbon atoms. Comparing a linear alkane with a cycloalkane shows that an additional C—C bond must be formed, which removes two hydrogen atoms. Consequently, the general formula for a cycloalkane containing one ring is CnH2n.