In Depth: The Heisenberg Uncertainty Principle

The result of your calculation shows that if an electron has Δx = 1 pm, the uncertainty in its velocity is at least 5 × 107 m/s. In other words, we essentially have no idea how fast it’s moving.

The uncertainty principle may seem strange, but we can say that the probability of finding a particle-like electron at a given location depends on the shape of the wave associated with the electron. Various wave shapes can be described mathematically using functions such as sines or cosines; that is, there is a mathematical wave function that describes each wave. The wave function is usually represented by a Greek letter ψ.

Shortly after the uncertainty principle was proposed, the German physicist Max Born (1882 to 1969) suggested that the square of the magnitude of the wave function, ψ2, at any position is proportional to the probability of finding the electron (as a particle) at that position. If we can determine the wave function associated with an electron, we can also determine the relative probability of the electron being located at one point as opposed to another. Thus, each wave form you drew in a previous Activity can be represented by a different function, ψn, each has a different distribution of electric charge throughout the box, and each is associated with a different, specific energy value. 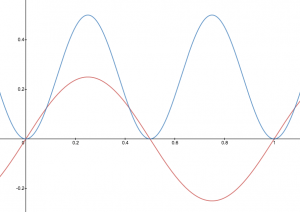 In your course notebook, annotate each of your drawings of the vibrating string with dots such that the density of dots indicates the electron probability density.

In Bohr’s theory an electron had a well-defined orbit around the nucleus, but according to the uncertainty principle, the best we can do is indicate electron density in various regions. Consequently we use a slightly different word to refer to the wave function and its electron-density distribution: orbital. The electron density of orbitals of an atom or molecule is very useful because it indicates where there is negative charge (electron density) relative to positive charge (atomic nuclei). This helps us understand atomic properties, chemical bonds, and forces between molecules.