For an example, consider the following reaction:

The two equilibrium constants, Kc and Kp, are directly related to each other. For the generic gas-phase reaction: 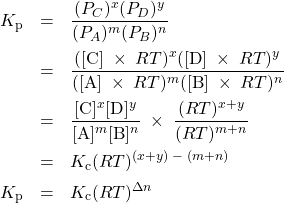 Note that the gas constant, R, can be expressed in different units (for example, R = 8.314

). Use the R value and associated units that match the partial pressure units used in the Kp expression.

For some heterogeneous equilibria that involve gases, equilibrium constants can be expressed using partial pressures instead of concentrations. Two examples are: