Let’s use the reaction

to see how a reaction’s kinetics relates to its equilibrium.

When we first considered the equilibrium of the cis–trans isomerization reaction, we noted that the reaction has a ΔrG° = +3.88 kJ/mol at 615 K. Because the forward and reverse reaction has the same transition state, this ΔrG° value tells us that Ea, reverse = Ea, forward – 3880 J/mol. 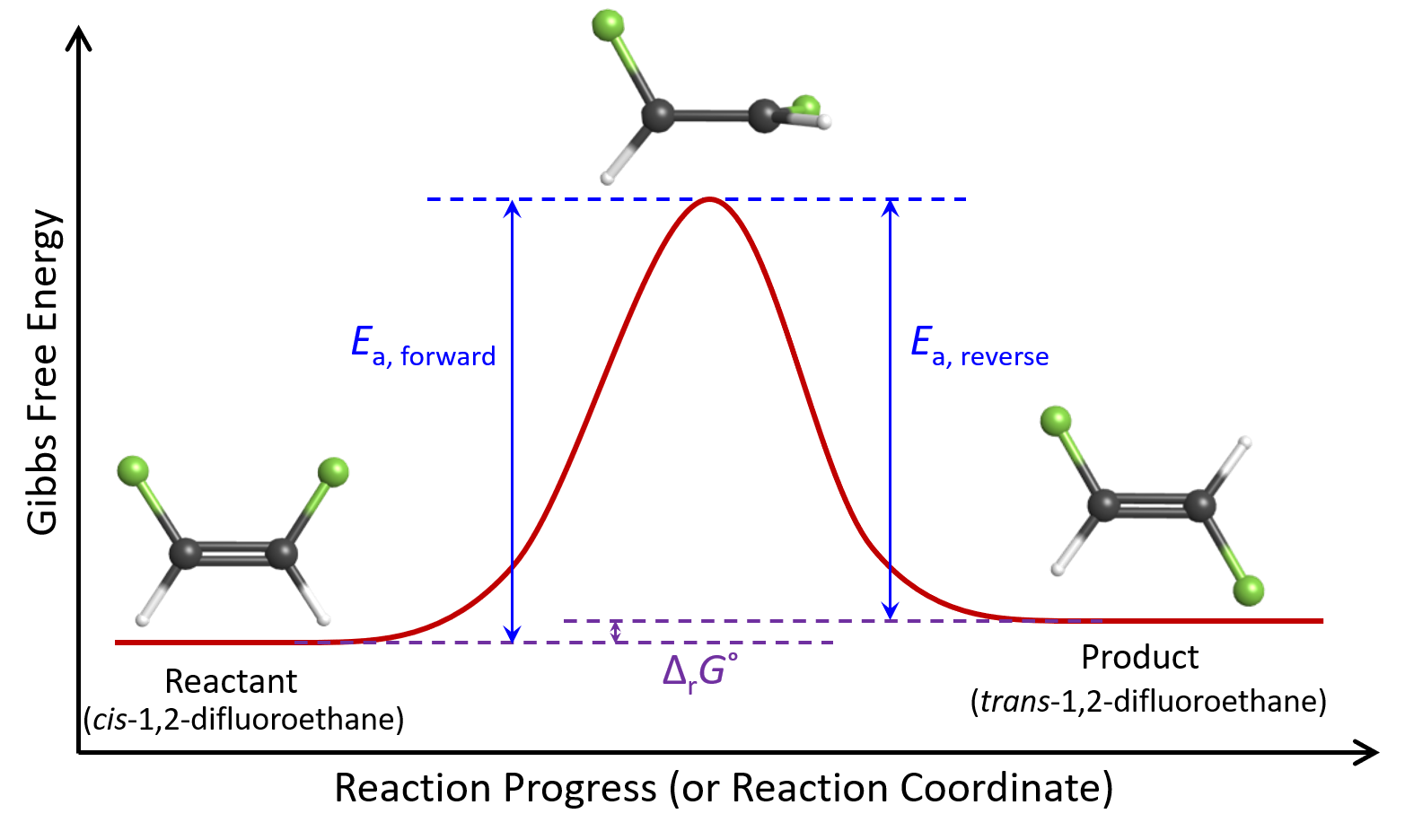 For this reaction, because Ea, forward is greater than Ea, reverse,  kforward would be smaller than kreverse. Using the Arrhenius equation, and assuming that Aforward = Areverse, we find that kforward = ½kreverse at 615 K:

and the rate of the reverse reaction is:

As the reaction proceeds, the rate of the forward reaction decreases as [cis-1,2-difluoroethene] decreases, and the rate of the reverse reaction increases as [trans-1,2-difluoroethene] increases. Equilibrium is reached when rateforward = ratereverse, resulting in the concentrations of both species remaining constant over time. But equilibrium is dynamic: each individual molecule is still constantly transforming back and forth between cis and trans forms.

The kinetic energy distribution of cis molecules is exactly the same as that of trans molecules because both isomers are at 615 K. However, because Ea, forward > Ea, reverse, the fraction of cis molecules with KE > Ea is smaller than the fraction of trans molecules with KE > Ea. This means that when a molecule is in the cis form, it is less likely for it to have enough energy to reach the transition state compared to when it is in the trans form. Therefore, on average, each molecule spends ⅔ time in the cis form and ⅓ time in the trans form, giving us K° = 0.5.

The K° = kforward/kreverse relationship can be derived from the fact that at equilibrium rateforward = ratereverse:

Many reactions have greater ΔrG° than the cis–trans isomerization reaction, and typically, useful reactions have greater negative ΔrG°. In such a case, kreverse << kforward, and you can stop the reaction before any significant reverse reaction has occurred. Equilibrium would not have been established, and that is OK: a reaction is more useful if you can maximize the quantity of desired products as quickly as possible, and reverse reaction runs counter to that end goal.