As you saw in the videos previously, the elements Li, Na, K, Rb, and Cs have similar properties and react with air and water in similar ways. In addition, all these elements react with fluorine, chlorine, bromine, and iodine to form similar compounds: LiF, NaF, KF, RbF, CsF, LiCl, NaCl, etc. (These compounds are collectively referred to as “salts” because their properties are similar to those of table salt, NaCl.) The reaction of Na(s) with Cl2(g) to form NaCl(s) is shown in this video.

The elements Li, Na, K, Rb, and Cs are called alkali metals. The elements F, Cl, Br, and I are called halogens. (“Halogen” comes from Greek hals, halo—”salt”.) All halogens consist of diatomic molecules, such as Cl2. Another group of elements, Be, Mg, Ca, Sr, and Ba also have similar physical properties, react with air and water (but more slowly than alkali metals), and react with halogens to form compounds with formulas like BeF2, BeCl2, MgCl2, etc. Be, Mg, Ca, Sr, and Ba are known as alkaline earth metals or alkaline earths. Just before the turn of the 20th century, chemists discovered another group of similar elements: He, Ne, Ar, Kr, and Xe. All are gases that undergo almost no chemical reactions, so He, Ne, Ar, Kr, and Xe are called noble gases. (One meaning of “noble” is “unreactive”.)

Here is a list of the first twenty elements in order of increasing atomic number:

The noble gases, alkali metals, alkaline earth metals, and halogens are color coded. Notice that the colors repeat periodically—every eight elements. About 150 years ago, Russian chemist Dmitri Mendeleev recognized this periodicity and created a table with horizontal rows of elements in atomic-weight order and groups of similar elements in vertical columns. Since Mendeleev’s time many more elements have been discovered: there are 118 in the modern periodic table below. But the idea of rows (periods) across which properties of elements vary and columns (groups) of elements with similar properties remains. 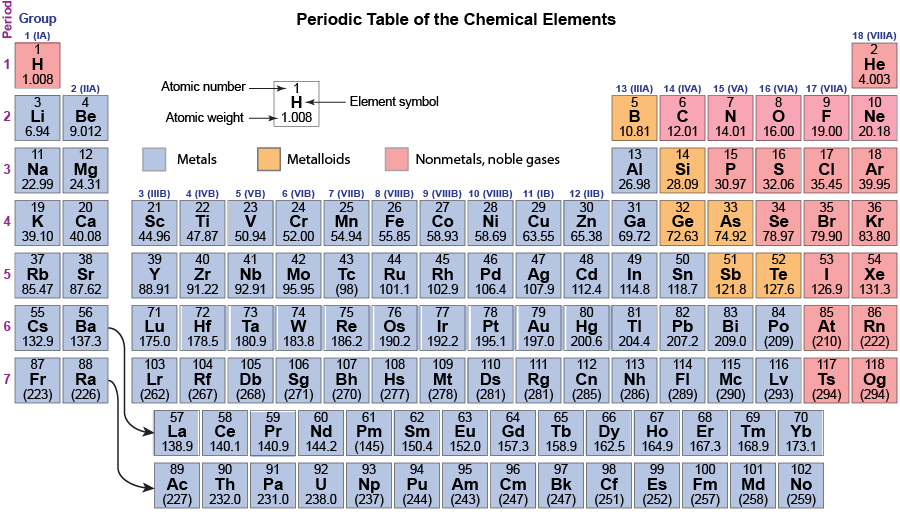 Each group (column) is identified by two numbers. The alkali-metal group is group 1 or IA; the alkaline-earth group is group 2 or IIA; the halogen group is group 17 or VIIA; and the noble-gas group is group 18 or VIIIA. The first number is designated by the International Union of Pure and Applied Chemistry; the second is more commonly used in the United States.

Down the left side of the table, the periods (rows) are numbered from 1 to 7. The first period contains only two elements; the second and third periods contain eight elements each; the fourth and fifth periods each contain 18 elements; and the sixth and seventh periods contain 32 elements. (Some elements in these latter two periods have been moved to the bottom of the table so it can fit on a printed page and be big enough to read. The curved arrows show where these elements should fit.)

The table is color coded to indicate whether an element is a metal, a metalloid, or a nonmetal. Metals conduct electricity, have lustrous surfaces when pure, combine with other metals to form alloys, and are malleable and ductile. The electrical conductivity of metals increases as temperature decreases. Non-metals are electrical insulators, usually are brittle as solids but may be liquids or gases at room temperature, and combine with other nonmetals by forming covalent bonds. Metalloids are intermediate between metals and nonmetals, Metalloids have lower electrical conductivity than metals but their conductivity increases as temperature increases.

Most elements are metals (the large blue-gray area); only 20 elements are nonmetals and six are metalloids. Notice that some groups, such as groups 14 (IVA) and 15 (VA) contain nonmetals, metalloids, and metals. This means that properties (electrical conductivity, for example) of some elements in these groups are significantly different from properties of other elements in the group; that is, in some groups elements are not as similar to each other as in the alkali-metal group. In all groups, however, the formulas of compounds are similar. For example, in group 14 (IVA), all elements form oxides with formulas XO2: CO2, SiO2, GeO2, SnO2, and PbO2. (Fl, flerovium, has been formed in quantities of only a few atoms in a particle accelerator, so the formula of its oxide has not been determined experimentally.)

Similarity of chemical formulas for elements in the same periodic group involves valence, the combining power of an atom. For example, sodium has a valence of 1 and so does chlorine; therefore, sodium and chlorine form the compound NaCl in which sodium atoms and chlorine atoms combine in a 1:1 ratio. Oxygen has a valence of 2; therefore the formula for sodium oxide is Na2O—it takes two valence 1 sodium atoms to match to oxygen’s valence of 2. From this you should be able to predict that the valence of C (or Si, Ge, Sn, or Pb) is 4 because the formula of carbon dioxide is CO2.