Have you noticed that some LED light bulbs are a different color from others? Some are “warm” and others are “cool” (see Figure 1). Candlelight is “warmer” (yellower) than fluorescent lights: the latter have a blue cast that can make people’s faces look sickly. These observations are related to blackbody radiation—the continuous spectrum of light emitted by matter as the matter is heated to higher temperatures.

Figure 2 shows the spectra, graphs of intensity versus wavelength, for blackbody radiation emitted by matter at several different temperatures.

Additional Practice 1
The temperatures listed in Figure 2 are often referred to as “color temperatures” because different temperatures make an object a different color. Use Figure 2 to predict the color of a blackbody at 4000 K and at 6000 K. 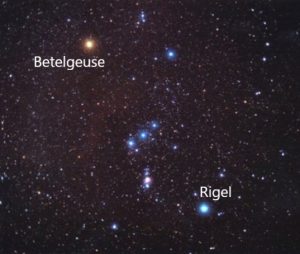 Additional Practice 2
It is reasonable to assume that light from stars is blackbody radiation. This enables astronomers to determine the temperatures of stars based on their spectra. (Spectra enable astronomers to learn lots more about stars than just temperature!) In the constellation Orion, the hunter, the two brightest stars are Betelgeuse and Rigel. Based on the image shown on the right (modification of work by NASA c/o Matthew Spinelli), which star has higher surface temperature? (For an interesting three-minute video of a distant galaxy seen in X-ray, visible, and infrared spectra, follow this link.)

In the late 1800s, physicists derived mathematical expressions for the blackbody curves using well-accepted concepts of mechanics and electromagnetism. They assumed that as the temperature increased the energies of atoms in a metal object would increase as the atoms vibrated more vigorously. These vibrations were assumed to create electromagnetic waves—the blackbody radiation. But no theory based on these ideas was able to predict the shapes of the curves shown in Figure 2. Even worse, the theory predicted that the intensity would become infinitely large for very short wavelengths, an absurd result.

In 1900, Max Planck introduced a revolutionary idea, from which he was able to derive a theoretical expression for blackbody spectra that fit the experimental observations within experimental error. Instead of assuming that the vibrating atoms could have a continuous set of energy values, Planck restricted the vibrational energies to discrete values—that is, he assumed that there must be some minimum quantity of energy that could be transferred between vibrating atoms. That quantity of energy is proportional to the frequency of vibration and is called a quantum.

Planck’s quantum theory was able to predict accurately the distribution of wavelengths emitted by a blackbody at various temperatures. However, Planck found it difficult to justify his assumption that vibration energies had to be multiples of a minimum energy—a quantum. When Albert Einstein used Planck’s quantum hypothesis to explain a different phenomenon, the photoelectric effect, the validity of quantum theory became clearer.

If you would like to experiment with the simulation further, download and save the simulation program, go to the location where you saved it, and double-click on the file name (photoelectric_en.jar) to install and run it. You need to have Java installed for this to work.

In your course notebook, write a brief summary of the results you obtained from experimenting with the photoelectric effect simulation. Also write a summary of how your experimental results can be interpreted based on the idea that light consists of quanta. Compare what you wrote with the summary below [also available at this link] and, if necessary, revise what you wrote.

Refer to what you wrote (including things that puzzled you) when you made the heading Photoelectric Effect in your class notebook. Revise what you wrote based on what you have just learned. Write a summary so that it will be a good study aid when you review for an exam.
Comments
Please use this form to report any inconsistencies, errors, or other things you would like to change about this page. We appreciate your comments. 🙂