A polyamide is a polymer in which the individual units are held together by amide linkages. For example, nylon 66 is obtained from the monomers 1,6-hexanediamine and hexanedioic acid. The condensation reaction between these two monomers forms an amide linkage (highlighted): 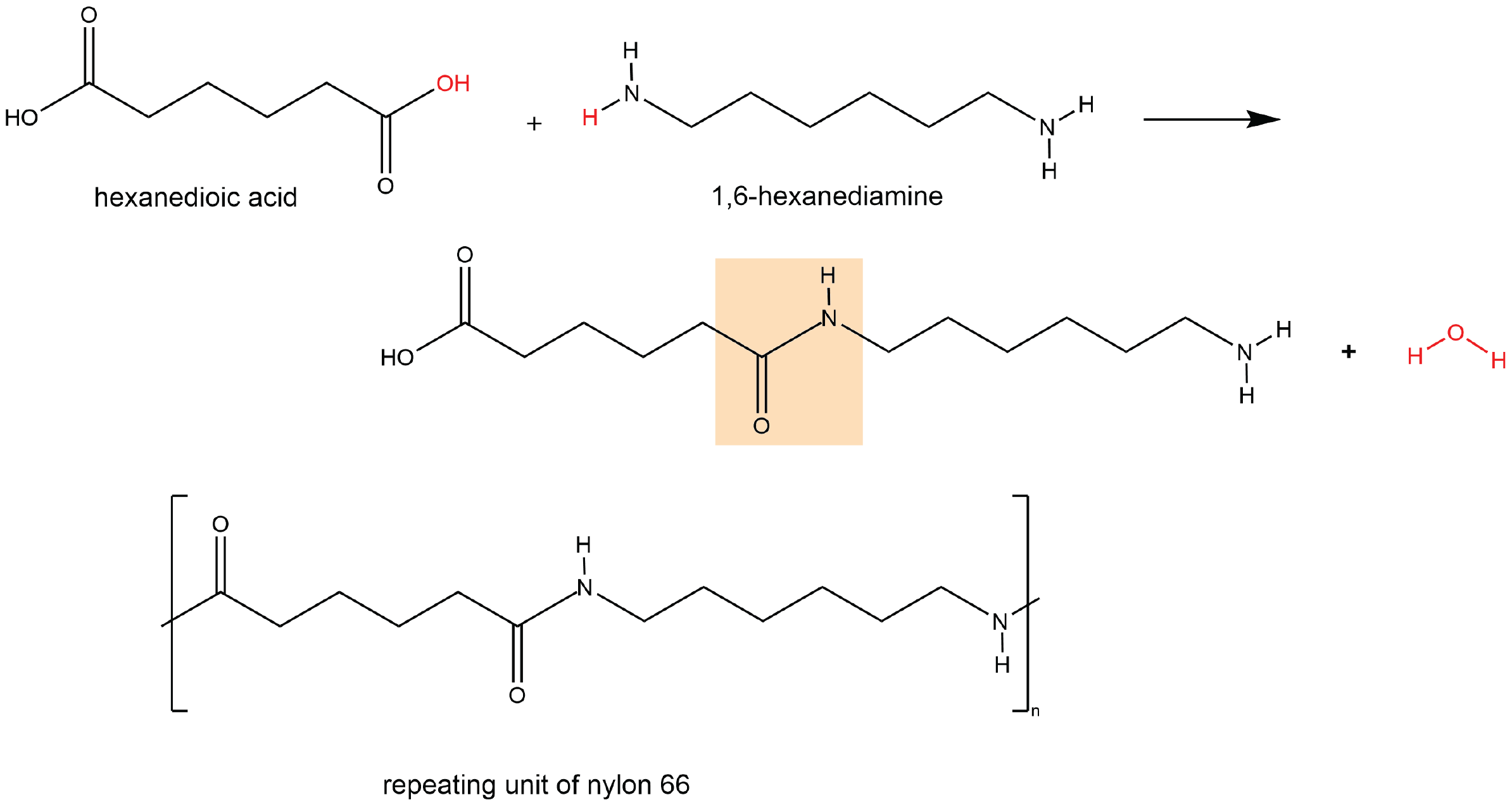 On one end, the product molecule has a carboxylic acid group, which can undergo a condensation reaction with another 1,6-hexanediamine molecule. On the other end, there is an amine group, which can react with another hexanedioic acid molecule. Such continuous condensation reactions lead to the formation of a nylon 66 polymer strand, the repeating unit of which is also shown above.

Nylon makes extremely strong threads and fibers because in addition to London dispersion forces, there is also dipole-dipole attractions and hydrogen bonding between the polymer strands. The dipole-dipole attraction arises from aligned amide groups in neighboring strands (note that amide groups within a linear strand are spaced far enough that their dipole-dipole interactions are not significant). A hydrogen bond can form between a N-H bond in one strand and a carbonyl O lone pair in a neighboring strand.

If you pull on both ends of a nylon thread, after a slight stretch, it will resist breaking because of the strong IMFs that hold neighboring chains together.

Kevlar is a synthetic polymer made from 1,4-phenylenediamine and terephthaloyl chloride monomers. The byproduct of this condensation reaction is HCl.

The material has a high tensile-strength to weight ratio (it is about 5 times stronger than an equal weight of steel), making it useful for many applications from bicycle tires to sails to body armor.

Similar to nylon, part of Kevlar’s strength is due to dipole-dipole interactions and hydrogen bonding that increase intermolecular forces between polymer strands.

Notice that compared to nylon 66, the density of hydrogen bonds in Kevlar is higher, imparting overall stronger intermolecular forces.

Kevlar also has noticeably strong London dispersion forces. Consider the repeating unit of Kevlar highlighted in the figure above. It is a planar structure, with planar benzene rings connected by planar amide groups. Hence a single layer of Kevlar, as shown in Figure: Kevlar Hydrogen Bonding, is planar. When layers of Kevlar are placed on top of each other, they can be stacked very efficiently, allowing for maximal London dispersion forces.

In addition to its better-known uses, Kevlar is used in cryogenic applications because of its very low thermal conductivity. Kevlar maintains its high strength when cooled to liquid nitrogen temperatures (–196 °C). Many other plastics become brittle and break at that temperature.

An important group of biopolymers, peptides and proteins, are also polyamides. The amide linkage joins individual amino acid molecules together to yield complex protein macromolecules. Similar to other polyamides, the hydrogen bonding interactions between amide groups are crucial for protein’s properties.