A mixture of a weak acid and its conjugate base, such as acetic acid and sodium acetate (CH3COOH + CH3COONa), or a mixture of a weak base and its conjugate acid, such as ammonia and ammonium chloride (NH3 + NH4Cl), is a buffer solution. A buffer solution resists changes in pH when small amounts of a strong acid or a strong base are added (Figure 1).

A solution of equal concentrations of CH3COOH and CH3COONa is slightly acidic because the Ka,acetic acid > Kb, acetate anion. When a strong base, such as NaOH, is added to this solution, the OH– anions react with the few H3O+ cations, decreasing concentrations of H3O+. This shifts the following equilibrium to the right:

restoring H3O+ concentration to almost the value it had before the NaOH was added. The net effect of most of the added NaOH is to convert some of the weak acid, CH3COOH, to a weak base, CH3COO−:

Hence, there is only a minimal decrease in H3O+ concentration.

When a strong acid, such as HCl, is added, the net effect of most of the added H3O+ is to convert acetate anions to acetic acid molecules:

And again, there is only a minimal increase in H3O+ concentration.

The ionization constant expression for a weak acid HA is:

Taking the negative logarithm of both sides, we have:

is between 0.1 and 10. If enough strong acid or strong base is added to the buffer solution to exceed this range, the pH begins to change significantly (in other words, the solution is no longer a buffer solution).

D36.3 Selection of a Suitable Buffer

When designing a buffer system, look for weak conjugate acid-base pairs that have pKa of the weak acid near the desired pH. Then adjust the ratio of the weak base to weak acid concentrations to achieve the exact pH desired. Make certain that the concentrations of weak base and weak acid are large enough to react with the quantities of acid or base that might be added to the buffer solution.

However, buffer solutions do not have an unlimited capacity to keep the pH relatively constant (Figure 4). For example, if we add sufficient strong base to a buffer that all the weak acid has reacted, no more buffering action toward the base is possible. Similarly, if we add an excess of strong acid, the weak base would all be reacted, and no more buffering action toward any additional acid would be possible. In fact, we do not even need to react away all the weak acid or base in a buffer to make significant change in pH: buffering action diminishes rapidly as a given component nears depletion. This was seen in Figure 3 in the above section, where reducing the concentration of weak acid to 11% of the concentration of weak base caused a change of 1 pH unit. The curve in Figure 3 goes up rapidly after that, indicating that the buffer has been “broken” and no longer resists changes in pH.

The buffer capacity is the amount (mol) of acid or base that can be added to a given volume of a buffer solution before the pH changes by ±1 from the pKa of the weak acid. (Recall that if equal concentrations of weak acid and conjugate base are in a buffer solution, pH = pKa.) 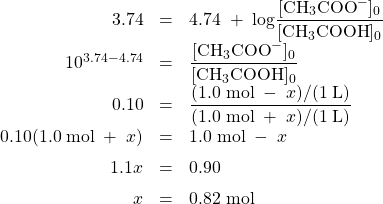