When the two atoms approach, the bonding and antibonding overlap of the two 2pz atomic orbitals occurs along the internuclear axis (z axis):

MOs derived from these two combinations are labeled

. If you don’t understand why these MOs are have the  label σ, review Section D5.5.

It is also possible to make bonding and antibonding combinations from the two 2px AOs and from the two 2py AOs. Here is a diagram for the two ways the 2px AOs can overlap. Notice that the orbitals overlap side-by-side, not end-on, because the 2px AOs are aligned perpendicular to the internuclear axis (z axis).

From the ten AOs (five from each F atom), ten MOs are formed in F2. Note that whether a MO is bonding or antibonding is dependent on whether it is lower or higher in energy than the AOs from which it is derived. Hence, even though

is lower in energy than

, it is still an antibonding MO.

We also see in Figure 1 that the two π bonding MOs,

Figure 2 shows the formation of the two perpendicular π bonds as two N atoms approach each other. (The two molecular depictions in the figure represent the same N2 molecule: one shows the 2px – 2px orbital overlap and the other shows the 2py – 2py orbital overlap.)

Based on the electron configuration for the F2 molecule, the π and π* MOs are all filled; there is no net π bond in the molecule. This is reflected in the bond order calculation: F2 has a bond order of 1, corresponding to a single σ bond.

Formation of a stable covalent molecule involves sharing electrons between two or more nuclei (the electrons occupy molecular orbitals that increase electron density between nuclei). The bond length between any two adjacent nuclei in such a covalent molecule is the distance between the two nuclei at the minimum energy in a graph of energy versus nuclear separation. For example, the bond length in a H2 molecule is 74 pm, as shown in Figure 3.

Bond enthalpy (also called bond energy) is the enthalpy change when a chemical bond is broken; that is, when two bonded atoms are completely separated. For example, Figure 3 shows that the bonded hydrogen atoms have energy of −436 kJ/mol relative to the separated hydrogen atoms. This means that the energy of the molecule must be increased by 436 kJ/mol to separate the atoms (break the bond). So the bond enthalpy for H2 is 436 kJ/mol.

In general, the bigger the atoms are, the longer the bond between them is. For example, consider the following trend in the average C-X bond lengths, where X is a halogen:

D6.3 Bonding in Molecules with More Than Two Atoms

Molecules with three or more atoms have molecular orbitals that span the entire molecule. The MOs are derived from the overlap of AOs from all the atoms in the molecule. Both the MO wave functions and the structure of the energy-level diagram are much more complicated than for diatomic molecules, but mathematical techniques exist for calculating and displaying the electron densities that form chemical bonds. In this course we will not delve deeply into these more complicated cases except to make several general points:

While MOs provide accurate physical information about the molecule, such as energies of the valence electrons involved in a reaction, their visualization does not always provide easy chemical understanding. It is possible to “re-combine” the MOs in such a way that the electron densities are displayed as being localized between pairs of atoms or on individual atoms; this allows us to correlate MO derived electron densities with the more familiar Lewis structures, which represent electrons in chemical bonds as lines between pairs of atoms and electrons on a single atom as dots. We will discuss Lewis structures in more depth on Day 7.

Some of the molecular orbitals for a water molecule are shown here. Based only on what you know about the appearance of bonding and antibonding orbitals, rank these MOs from lowest-energy to highest-energy. (Click on each image for a rotatable 3D view of the MO.) 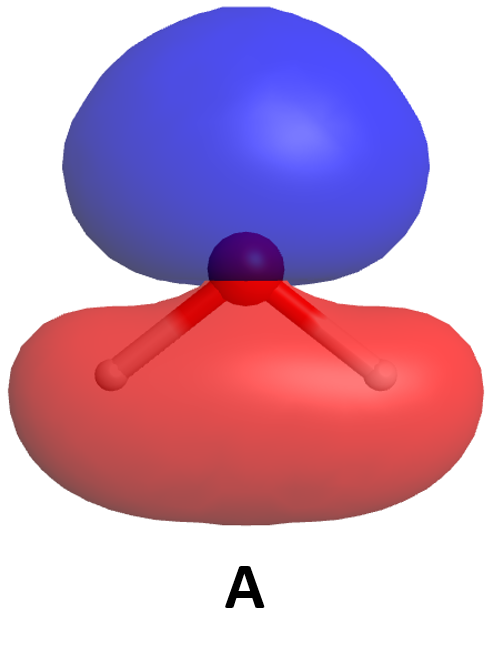 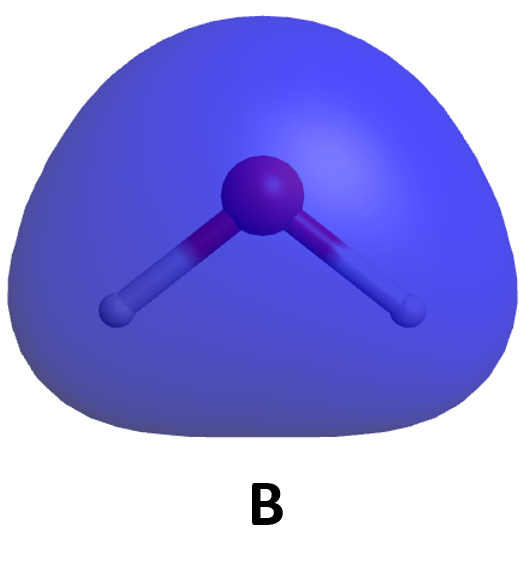 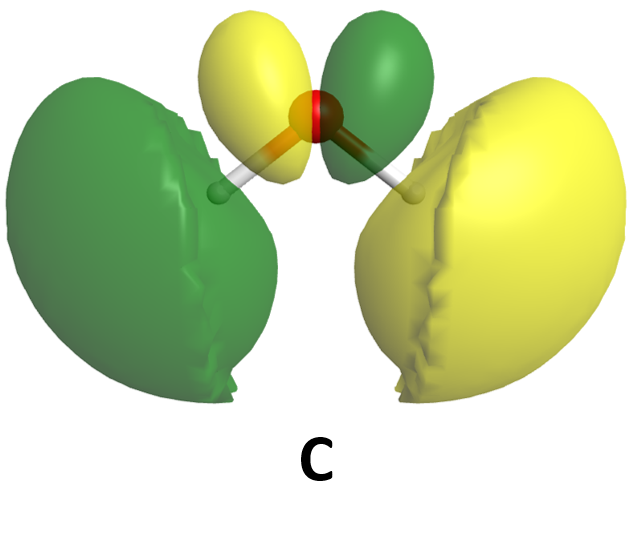 Stop to think about molecular orbitals and bonding. Make a list of the main things you learned as you studied this topic both in today’s work and the previous day’s work. Your list should provide a summary you can use to review later for an exam.

Molecular orbitals for molecules with three or more atoms are complicated and hard to draw. Thus, although MOs would convey a more descriptive and accurate picture of electron distribution within a molecule, chemists often rely on simpler diagrams to depict the covalent bonding. It will aid your understanding of chemistry if you can connect these simpler diagrams mentally with the more complete picture given by MOs.

The most commonly used hand-drawn depiction is the Lewis structure: a diagram that represents atomic nuclei and core electrons by chemical symbols and valence electrons as dots or lines. A Lewis structure is built by combining Lewis diagrams (Section D3.4) of the constituent atoms.

In Lewis structures, a single covalent bond is drawn as a pair of electron dots shared between two adjacent atoms, a bond pair. Valence electrons that are not in a bond are shown as pairs of dots associated with individual atoms, lone pairs. For example:

In the Cl2 molecule, each Cl atom has three lone pairs and the two Cl atoms share one bond pair. Hence, each Cl atom in Cl2 has formed an octet (is surrounded by eight valence electrons).

For simplicity and clarity, a bond pair is typically represented by a line instead of a pair of dots:

The octet rule states that atoms of main-group elements tend to gain, lose, or share enough electrons to form an octet (eight valence electrons). Such noble-gas electron configurations with completely filled valence shells are more stable, and therefore should correspond to how the electrons are arranged in a molecule.

The Lewis diagram for an atom can be used to predict the number of bonds the atom will form. For example, a carbon atom has four valence electrons and therefore requires four more electrons to reach an octet:

It is important to keep in mind that it is impossible to exceed an octet for atoms in the second period. This is particularly relevant because you will encounter numerous molecules containing the elements C, N and O.

Finally, because a hydrogen atom needs only two electrons to fill its valence shell, H is an important exception to the octet rule and forms only one bond.

Two atoms may need to share more than one pair of electrons to achieve the requisite octet. In other words, the bond order is greater than 1. A double bond consists of two pairs of electrons being shared between two atoms. For example:

A triple bond forms when three pairs of electron are shared between two atoms. For example:

Often you can draw a Lewis structure based on the number of bonds formed by each kind of atom. in more complicated cases, here is a step-by-step procedure for drawing Lewis structures of molecules and polyatomic ions:

Let’s apply these rules to a simple molecule, ammonia, NH3.

D6.6 Exceptions to the Octet Rule

Some stable covalent molecules contain one or more atoms that do not have an octet. Such molecules fall into three categories.

A molecule that contains an odd number of electrons must have at least one electron unpaired and therefore must have an atom with fewer than eight electrons in its valence shell (typically it’s seven electrons). A molecule with at least one unpaired electron is called a free radical. Nitric oxide, NO, which is produced in internal combustion engines when oxygen and nitrogen react at high temperatures, is an example.

Forming a triple bond would cause either oxygen or nitrogen to exceed an octet, which is a very unlikely electron arrangement.

Molecules with an Incomplete Octet on a Central Atom

Some molecules contain a central atom that does not have a filled valence shell. Usually, these central atoms are from groups 2 (IIA) and 13 (IIIA). For example, the Lewis structure of beryllium chloride, BeCl2, shows beryllium with only four electrons, and that of boron trifluoride, BF3, shows boron with only six electrons.

It is possible to draw a structure for each of these molecules where there are double bonds to the central atom and therefore an octet. For example, BF3 with one B=F double bond would satisfy the octet rule. However, experimental evidence tells us that the bond lengths in BF3 are closer to B–F single bonds. The observed reactivity of BF3 is also consistent with less than an octet on boron: BF3 reacts readily with NH3, with the lone pair on nitrogen (red) forming a bond (red) that completes the octet on the boron atom:

Molecules with More Than an Octet on a Central Atom

This Podia problem is based on today’s pre-class material; working through that material will help you solve the problem.

The molecule C2 is quite unstable and can only be isolated and studied experimentally in the gas phase. Molecular spectroscopy of C2 reveals that a C2 molecule in the ground state has no unpaired electrons.