A substance made of molecules is called a covalent molecular substance. An important point in the activity you just completed is this: unlike ionic compounds, metals, or noble gases, where boiling involves freeing ions or atoms from each other, boiling a covalent molecular substance involves freeing molecules from each other. No covalent bonds are broken during the boiling process and the same molecules are present in the gas phase as were present in the liquid phase. The same reasoning applies to melting: covalent bonds between atoms within molecules are not broken, but forces between the molecules must be partially overcome.

Many properties of substances that consist of covalently bonded molecules are exemplified by hydrocarbons, compounds that contain only the elements carbon and hydrogen. Carbon is unique among the elements in that carbon atoms can form long chains of carbon-carbon bonds. This happens because carbon atoms form strong single bonds to other carbon atoms and because carbon’ has four valence electrons, resulting in four bonds per carbon atom. When all other bonds in a chain of carbon atoms are to hydrogen atoms, the molecule is a hydrocarbon. In addition to long chains, hydrocarbon molecules can have chains with branches; chains folded back on themselves to form rings; and chains, branched chains, or rings that include double or triple bonds. Many hydrocarbons are found in plants, animals, and their fossils; other hydrocarbons have been prepared in the laboratory.

Combustion of hydrocarbons is highly exothermic so hydrocarbons are excellent fuels. For example, methane (CH4) is the principal component of natural gas, LP gas is mainly propane (C3H8) and butane (C4H10) . Other hydrocarbon fuels are acetylene, diesel fuel, jet fuel, and heating oil. The familiar plastics polyethylene, polypropylene, and polystyrene are also hydrocarbons.

The simplest hydrocarbons, alkanes, contain only single bonds between carbon atoms. Each of the carbon atoms in an alkane is bonded to four other atoms, each of which is either carbon or hydrogen. The bond enthalpies for C–C and C–H bonds are 346 and 436 kJ/mol, respectively. These strong bonds are difficult to break so alkanes are relatively unreactive.

Alkanes that do not contain rings of carbon atoms are called acyclic alkanes; they have the general molecular formula CnH2n+2. A molecular formula, such C6H14 for the alkane named hexane, specifies how many atoms of each type are in the molecule; in C6H14 there are 6 C atoms and 14 H atoms in each molecule. These alkanes are also called saturated hydrocarbons because each C atom is bonded to the maximum possible number of H atoms. The alkane molecule is said to be “saturated” with hydrogen.

Figure 1. Pictured are the Lewis structures, ball-and-stick models, and space-filling models for molecules of methane, ethane, and pentane. Move the slider to see the various representations.

Unbranched acyclic alkanes are often called “straight-chain” alkanes because the carbon atoms can be drawn in a single, straight row in the Lewis structure. However, the Lewis structure represents only some aspects of the molecule, not all. As the ball-and-stick and space-filling models of pentane in Figure 1 show, the C atoms do not lie in a completely straight line. Why there is a zigzag row of atoms is a topic for Unit 2.

Branched alkanes contain more than one carbon chain. For example, 3-methylpentane has a branch at the third carbon atom along the chain. (The C atoms are numbered with subscripts to show that the branch occurs at the third C atom. The number of the C atom with the branch appears in the name. “Methyl” refers to the group H3C—, which is a methane molecule lacking one H nucleus.) 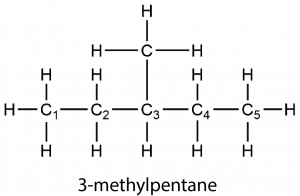 A cycloalkane has at least one ring of carbon atoms. Comparing a linear alkane with a cycloalkane shows that an additional C—C bond must be formed, which removes two hydrogen atoms. Consequently, the general formula for a cycloalkane containing one ring is CnH2n.

Unsaturated hydrocarbons that contain one or more double bonds are called alkenes. The general molecular formula for alkenes with one double bond is CnH2n. The formula has two hydrogen atoms fewer than the corresponding alkane with same number of carbon atoms, and hence 1 degree of unsaturation. It is possible to have a ring of carbon atoms that contains a double bond. Cyclic alkenes have one degree of unsaturation from each cyclic structure and one from each C=C double bond.

The carbon atoms involved in the double bond are sp2 hybridized, and therefore the local geometry there is trigonal planar. The presence of these double bond(s) is signified by the suffix -ene in the name. Ethene, C2H4, commonly called ethylene, is the simplest alkene. Some other examples include:

The presence of the π bond makes alkenes much more reactive than alkanes because a carbon-carbon π bond is usually weaker and more easily disrupted than a σ bond. The double bond is therefore a functional group, a specific structure that has similar chemical behavior in every molecule where it occurs. For example, all alkenes can undergo a characteristic reaction, called an addition reaction, in which the π bond is broken and replaced by two additional σ bonds. Hydrogen and halogen molecules can undergo addition reactions with alkenes, for example:

An alkyne is a hydrocarbon with one or more carbon-carbon triple bonds. Two carbon atoms joined by a triple bond are bound together by one σ bond and two π bonds. The general molecular formula of an alkyne with one triple bond is CnH2n-2. The alkyne has four hydrogen atoms fewer than the corresponding alkane with same number of carbons, and hence 2 degrees of unsaturation.

The suffix -yne is used to indicate the presence of a triple bond. The simplest alkyne is ethyne, C2H2, commonly called acetylene. The Lewis structure for ethyne is:

Chemically, alkynes have reactivity similar to alkenes. Since the C≡C functional group has two π bonds, alkynes can react with twice as much reagent in an addition reaction. For example, acetylene can react with bromine in the following reaction:

Petroleum (from Latin, petra: “rock”, oleum: “oil”) consists primarily of naturally occurring hydrocarbons, predominantly alkanes and cycloalkanes. The alkane chains can be quite long, and properties such as melting point and boiling point usually vary smoothly and predictably as a function of the number electrons in various alkane molecules (Table 1).

Petroleum is the main source of hydrocarbon fuels, such as LP gas, gasoline, and fuel oil. These are separated by fractional distillation, a process in which petroleum is boiled and the different hydrocarbons condense to liquids at different temperatures (Figure 2). Fractional distillation takes advantage of the boiling-point differences of the various component substances (Table 1). The different boiling points arise from the differences in the London dispersion forces between molecules.

Gasoline is a liquid mixture of linear and branched alkanes, each containing five to twelve carbon atoms. Gasoline contains various additives to improve its performance as a fuel. Kerosene, diesel fuel, motor oil, and fuel oil are primarily mixtures of alkanes made of larger molecules with more electrons than gasoline molecules. Provided there is plenty of oxygen available, combustion converts almost all the carbon in the alkane fuel to carbon dioxide and water. Thus combustion of alkanes invariably adds water vapor and CO2 to the atmosphere—a human contribution to global warming.

Because there is greater demand for gasoline than for other components of petroleum, catalytic cracking is used in petroleum refining to break up larger molecules into smaller molecules, some of which are within the gasoline range of 5–12 carbon atoms. Catalytic cracking involves temperatures of 480–550 °C and a catalyst—conditions that can break (crack) carbon-carbon bonds and rearrange molecular structures. The hydrocarbon molecules are broken up in a fairly random way to produce mixtures of smaller molecules, some of which have carbon-carbon double bonds. One possible reaction involving C15H32 might be:

The alkene products, ethene and propene, are important for producing other organic chemicals. The octane product is a component of gasoline. Note that catalytic cracking involves temperatures higher than fractional distillation as well as a catalyst in order to break carbon-carbon bonds (as opposed to overcoming LDFs between hydrocarbon molecules).

Metals consist of positive ions surrounded by valence electrons that are not associated with any specific positive ion (that is, with any specific metal-atom core). Attractions between metal atoms involve positive ions and electrons and therefore are much larger than attractions between noble-gas atoms. Metallic bonding becomes stronger as the number of valence electrons in the metal atom increases. Metal atoms are attracted strongly enough that most metals are solids at room temperature.

When an atom with low attraction for electrons (a metal atom with low ionization energy) approaches an atom with greater attractions for electrons (a nonmetal with large negative electron affinity), electron density can transfer from the metal atom to the nonmetal atom to form ions. Coulomb’s law attractions between ions are large and depend on the charges of the ions and the distance between the ions. This results in formation of ionic crystal lattices that require significant increase in temperature for melting or boiling.

When two nonmetal atoms approach, the typical result is a covalent chemical bond, although there are cases such as He2 where there are enough electrons to fill antibonding as well as bonding molecular orbitals and give a bond order of zero. The characteristics of covalent bonds depend on properties of the bonded atoms, such as size and number of electrons. Covalent bonds connect atoms to form molecules. The strengths of bonds in molecules are typically as large as or larger than the strengths of metallic bonds and ionic bonds. Thus, when a molecular substance melts or boils, atoms remain bonded and the atomic-scale particles in the liquid or gas phase are molecules.

For example, when NaCl melts, Na+ ions and Cl‾ ions break from the crystal lattice and move freely around each other. Breaking the ionic bonds requires significant energy, and hence NaCl has a high melting point of 801 °C. In contrast, when methane (CH4) melts, individual methane  (CH4) molecules stay intact, but they can move freely around other methane molecules. The attractions between methane molecules must be partially overcome, but those attractions are not as strong as covalent bonds or ionic bonds. Hence, the melting point of methane is much lower than for NaCl. Methane melts at −182 °C.

This Podia problem is based on today’s pre-class material; working through that material will help you solve the problem.

Forces between atoms, ions, and molecules typically result in a graph of energy versus distance between particles that looks like this: 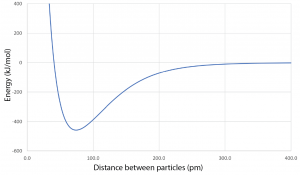 For each pair of substances listed below make a graph of energy versus distance between atomic-scale particles. Use a single set of coordinate axes for each pair. Then draw a curve like the one above for each substance in the pair. Your curves should be to scale relative to each other, but there is no need to put values on the tick marks along the axes. The relative depths of the minima and the relative positions of the minima along the horizontal axis are important.