A preface to Amharic :

Amharic is established as the national language of Ethiopia as it has about 26 million global users, but is centrally used in the neighboring countries of Ethiopia and Eritrea. Amharic is classified as a Semitic language, a group of languages that form the Afro-Asiatic language group. Languages within this class are mainly found within the Middle East, Northern Africa, and the horn of Africa (where Ethiopia and Eritrea are located).

Alternative pronunciations/spellings of Amharic are Amarigna and Amarinya. The characters that make up Amharic’s alphabet are sourced from the Ge’ez script, the historically religious script of Ethiopia’s Christians. It is believed that the origins of Amharic can dated back to 1000 B.C. The alphabet is referred to as “Fidel”, ፊደል, directly translating to the word, “letter.” Amharic contains 33 consonants, while each single consonant has 7 shapes or orders based on the vowel it is combined with. The language is written in a left to right order, similar to English, but vowels are always combined with a consonant, they are never independent. Amharic has very few similarities to English. Despite Amharic being a Semitic language, it is debated that the similarities between Arabic, Hebrew, etc. (other Semitic languages) are limited as well. 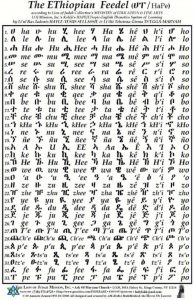