Arabic is the official language of more than 20 countries. Arabic speaking countries primarily include the region from North Africa, the Arabian Peninsula, and other parts of the Middle East. It’s also spoken by more than 300 million people worldwide.

Classical Arabic, oftentimes referred to as “formal” Arabic, is the language of the Quran and therefore holds a great deal of importance in the Islamic religion. Classical Arabic is widely used by religious scholars and is taught to many students around the world, including the Arabic speaking world. This form of Arabic is considered to be the basis of the grammatical norms of the language.

Modern Standard Arabic (MSA) is similar to Classical Arabic, but is generally easier and less technically and grammatically demanding. MSA is widely understood across the Arabic speaking region and is often used by politicians, presenters, journalists, news correspondents, and academics. MSA is commonly taught to non-native speakers.

However, there are many “spoken” dialects of Arabic. Some of the dialects are almost unintelligible to each other. For example, an Arabic speaker from Morocco and a Arabic speaker from Iraq will likely find it very difficult, if not impossible, to understand each others’ local dialects. However, MSA is widely understood by Arabic speakers and some dialects (such as Egyptian) are more easily understood across the region because of its predominance in Arabic media. The main dialect groups are found in Iraq, Syria, Egypt, and Northern Africa. However, there are significant difference even within those broad groups. Here’s a useful map and website to learn from about the many Arabic dialects: 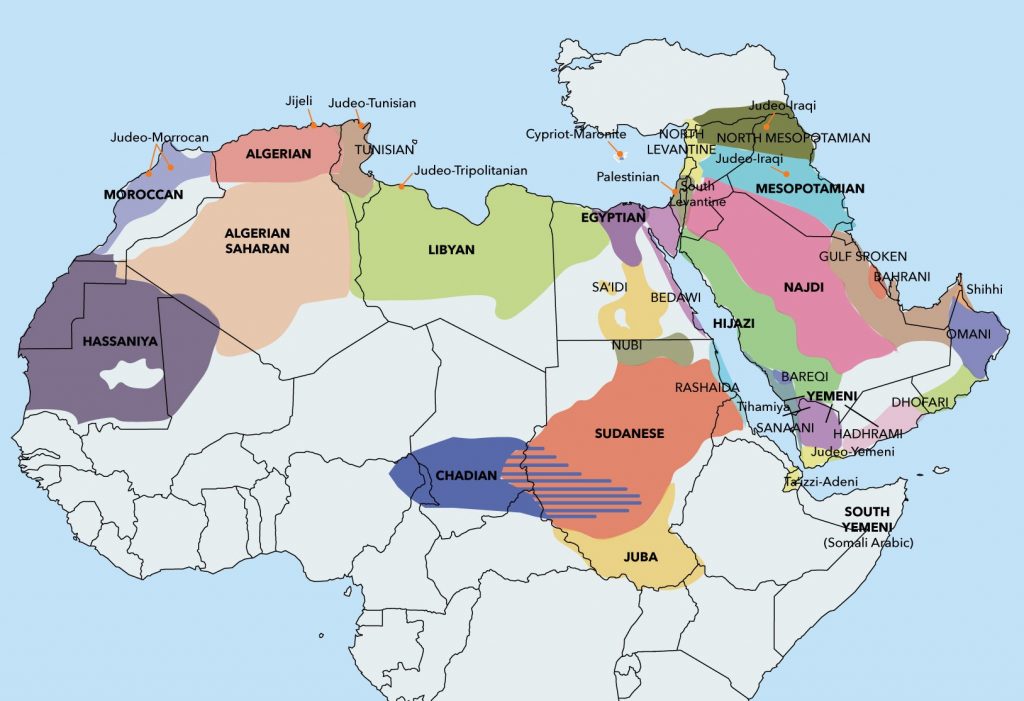 Arabic developed through oral traditions and poetry even before the emergence of Islam and even before an Arabic script was adopted. Now, Arabic calligraphy is a well known art form and poetry is still an important part of the region’s culture and society.

There are many words that are use in the English language that derive from Arabic. Some of the words that Arabic has contributed to English include: sugar, algebra, alcohol, soda, coffee, cotton, guitar, lemon, gazelle, and many more!

BBC. “A Guide to Arabic- 10 Fast Facts about the Arabic Language.” http://www.bbc.co.uk/languages/other/arabic/guide/facts.shtml

“The Key to Learning a New Arabic Dialect.” https://www.industryarabic.com/arabic-dialects/