Where is Fulfulde/Fula/Peul/Pulaar/Fulani spoken and why does it have so many names?

Fulfulde, also known as Peul, Fulani, Fula, and Pulaar, is spoken throughout West Africa and has numerous dialects, some of which can be found within the same country (see map below). The name of the dialect is based on where the speakers are; they call their language Pulaar or Pular in the western dialects (Senegal, Gambia, Mauritania, Western Mali) and Fulfulde in the central and eastern dialects (central Mali and further east). Fula and Fulani (the two English names) come originally from Manding and Hausa, respectively; Peul (the French name), comes from Wolof. Fulfulde belongs to the Senegambian branch of the Niger-Congo language group. Although an estimated 65 million people speak it, it is not a primary language and is often spoken as a second language outside of the Fula ethnic group. 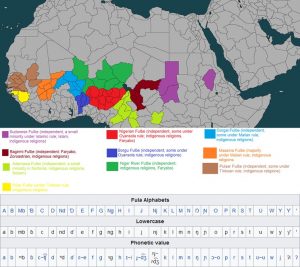 Fulfulde is not a tonal language, but has a significant noun class system, with 24- 26 (depending on the dialect) different classes.  In very simplified terms, noun classes act as markers (often object pronouns) to indicate what the speaker is referring to; there are classes for liquids, big things, small things, plurals, trees, and even cows.